Tarot Cards: The Lovers, Sixes of all suits

In his book Numerology: Key to the Tarot (Whitford Press), Sandor Konraad gives the Keywords "Affectionate, Stable, Conservative" for the number Six.

Quoting from Numerology and The Divine Triangle by Faith Javane and Dusty Bunker (Whitford Press): "Six is conscientious; it desires to bring harmony, truth, justice and a sense of balance into its environment. Love and compassion are uppermost in its mind." Key words for Six: "family and social responsibility, service, love, compassion, counseling, healing, creativity."

Gary Meister, CTM offers the key words "Peace, Harmony" for the number Six. He writes: "Numbers were considered sacred in the distant past. . . Six held a special place as it is considered a 'perfect number.' The sum of its divisors, other than itself, add up to itself. Esoterically, this was considered to be a very harmonious interaction. So, six is a number of peace and harmony." He adds that Six suggests a period of emotional rest -- the crises have passed; things are back under control.

In Anna Burroughs Cook's Tarot Dynamics system (based in large part on Javane and Bunker): "Subject Card Six represents your level of commitment."

THE LOVERS (Trump 6): Konraad writes, "In Arcanum VI of the Tarot, a man must choose between two women, an older and a younger one. In the case of 6, the younger one could be said to represent adventure in the form of a creative calling and the older one, security in an established company or job in commerce."

Concerning The Lovers (Card 6), Cook writes: "Card Six means an opportunity to repair whatever needs to be repaired or clarified in the hope that matters will run more efficiently and harmoniously." Cook's key word for The Lovers is "Harmony."

According to Javane and Bunker: "The Lovers is an obvious reference to partnership and marriage, the union of opposite but complementary components. The keyword is discrimination. When we discriminate we set apart and separate in order to see the innate differences between two categories. In this manner, we can tell the true from the false."

In astrology, the Sixth House is known as the House of Work, Service, and Health. It is ruled by the zodiac sign Virgo, known as a discriminating, logical, analytical, and critical sign.

It is clear to me that Six does suggest peace and harmony, but often this is coming after a time of conflict and disturbance. I especially like Anna Cook's comment about Six representing "level of commitment." 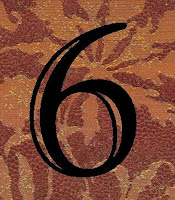 I hope you enjoy these quotations I found that include the number Six:


"Sometimes I've believed as many as six impossible things before breakfast."
~ Lewis Carroll

"The natural term of the affection of the human animal for its offspring is six years."
~ George Bernard Shaw

You can only fall in love six times in your life. Choose wisely.
~ Doug Coupland

"I keep six honest serving-men
(They taught me all I knew);
Their names are What and Why and When
And How and Where and Who."
~ Rudyard Kipling