What is your reaction when you hear the term “Mercury retrograde”?

As an astrologer, I am very familiar with Mercury turning retrograde (appearing to move backwards in the sky) several times a year. It’s retrograde even as I type this (July 7-July 31).

Mercury is the planet of the mind and communication, so it’s pretty obvious that if it “moves backwards,” all manner of thinking and communication could be jumbled, confusing, erroneous, and downright disastrous. The current Mercury retrograde started out in Leo and then sashayed backwards into Cancer, which also affects the effects one might expect to experience.

I am delighted to share a Tarot spread that I recently heard about through Bridget at _Biddy Tarot_  : The Mercury Retrograde Spread by _Liz Worth_. Her positional definitions are based on the nature of Mercury retrograde as well as the energies we associate with Leo and Cancer. 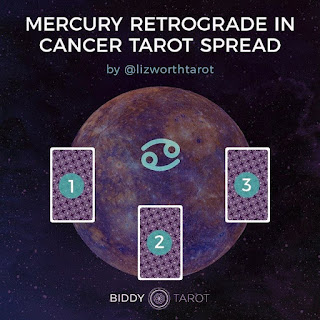 Liz has graciously allowed me to post the spread here. The Celestial Tarot by Kay Steventon and Brian Clark (U.S. Games Systems, Inc.) insisted on participating in this reading with me, and I agreed that it made a great deal of sense. 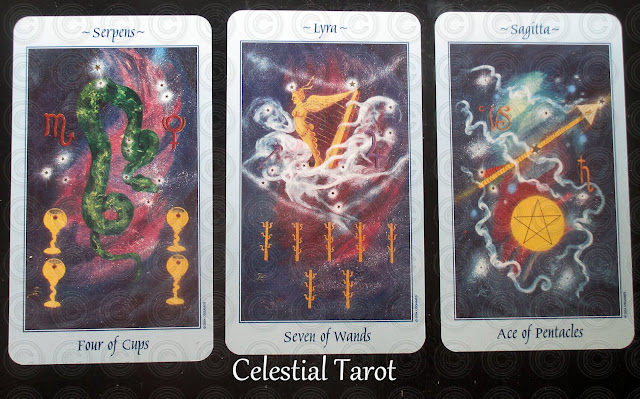 1. What is it time for me to value within myself?

FOUR OF CUPS / Serpens
The zodiac sign linked with this card is Scorpio (Water), whose modern ruler is Pluto. There is a sense of loss, disappointment, and grief in the Four of Cups, and most likely these feelings are deep and powerful. It is time for me to value those feelings – not so I can wallow in them or use them as an excuse, but so that I can honor them as real and useful to my current-day Self.

2. How can this help me shine in the world?

SEVEN OF WANDS / Lyra
With this card we enter into the first decanate of Sagittarius (my Sun sign), ruled by Jupiter. The energy is that of strong conviction and determination to defend that which is valued against all attacks. Both Jupiter and Sagittarius (Fire) carry the confidence and power to handle this sort of thing quite well. This is about reaffirming my beliefs and goals in the face of adversity, and that is how I can shine in the world.

3. Which of my needs is most important to focus on to support my path at this time?

ACE OF PENTACLES / Sagitta
Another reference to my Sun sign, Sagittarius, comes in the form of the constellation Sagitta. With Aces often representing new beginnings and the suit of Pentacles being the suit of Earth (physical, material world), it is important for me to focus on a new direction or plan on the material, physical plane. This could refer to health or to finances, for example. Ruling this card are the sign Capricorn (Earth) and its ruler, Saturn. It’s all about structure, discipline, ambition, and achievement – and how I can use that to support and enhance my spiritual and creative nature.

During this Mercury retrograde, the consecutive signs Scorpio, Sagittarius, and Capricorn form a trio of diverse energies that can be channeled in my chosen direction.

The following is a post I originally made on July 4, 2014 to coincide with Independence Day here in the U.S.

It is about America’s birth chart and the Tarot cards that one could associate with that chart. Please note that I am not ignoring the fact that there were many nations on this continent long before the arrival of European settlers and the writing of the Declaration of Independence. I am choosing in this post to deal with the formal establishment of the United States of America in 1776.

After doing a bit of research, I quickly discovered that astrologers do not agree on the date and time (mostly the time) for which the birth chart of the U.S. should be cast. I won’t go into all of that here. You can do a search on the net and find out more than you probably want to know about it!

The two main variances seem to be the “Sibly chart,” originally published in 1787 by English astrologer, physician and herbalist, Ebenezer Sibly (1751-1799). Those who use this chart note that Sibly was alive at the time of the signing and therefore could have had access to information that is no longer available. The Sibly Chart, cast for July 4, 1776, 5:10 pm LMT (Local Mean Time), Philadelphia, PA, has Sagittarius rising.

In contrast, we have the “Gemini Rising Chart” for 02:13am, attributed to Evangeline Adams in the 1920s. This chart places Uranus (planet of rebellion and upheaval) exactly on the Ascendant. Some astrologers argue that this reflects the “birth” of America quite accurately, but opponents feel the chart does not depict the true nature of American character. Anthony Louis explained his support for this chart in a blog post in 2012: http://tonylouis.wordpress.com/2012/02/25/why-i-use-a-usa-gemini-rising-chart/

So… which chart shall I use for this post? In Tarot terms, using the astrological attributions developed by the Order of the Golden Dawn, I have a choice between Temperance (Sagittarius rising) and The Lovers (Gemini rising). I think I am going to go way out on a limb and not only choose the Gemini chart but use the Aleister Crowley Thoth deck (U.S. Games Systems, Inc.) as my Tarot reference for this post.

This should be interesting… 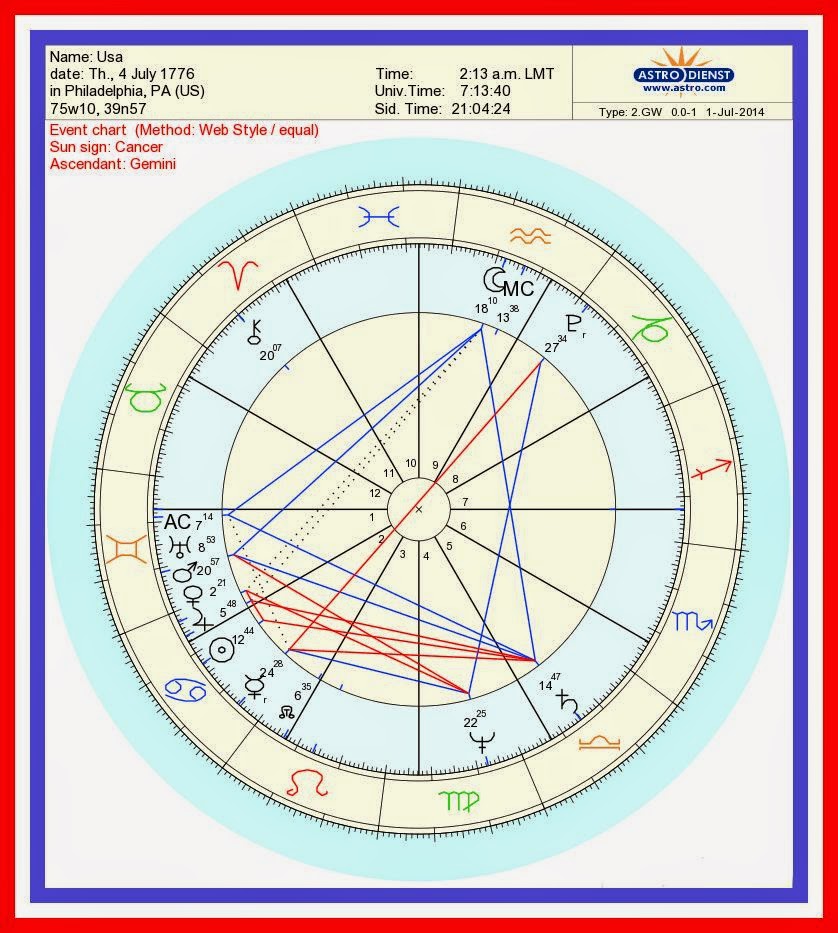 The Rising Sign, Gemini, is represented by The Lovers card. Because the planet Uranus sits on the Ascendant, I am pairing The Lovers with The Fool, which is linked with Uranus by modern occultists (Uranus had not yet been discovered when the Golden Dawn made its original astrological attributions, which attributed the element Air to The Fool). 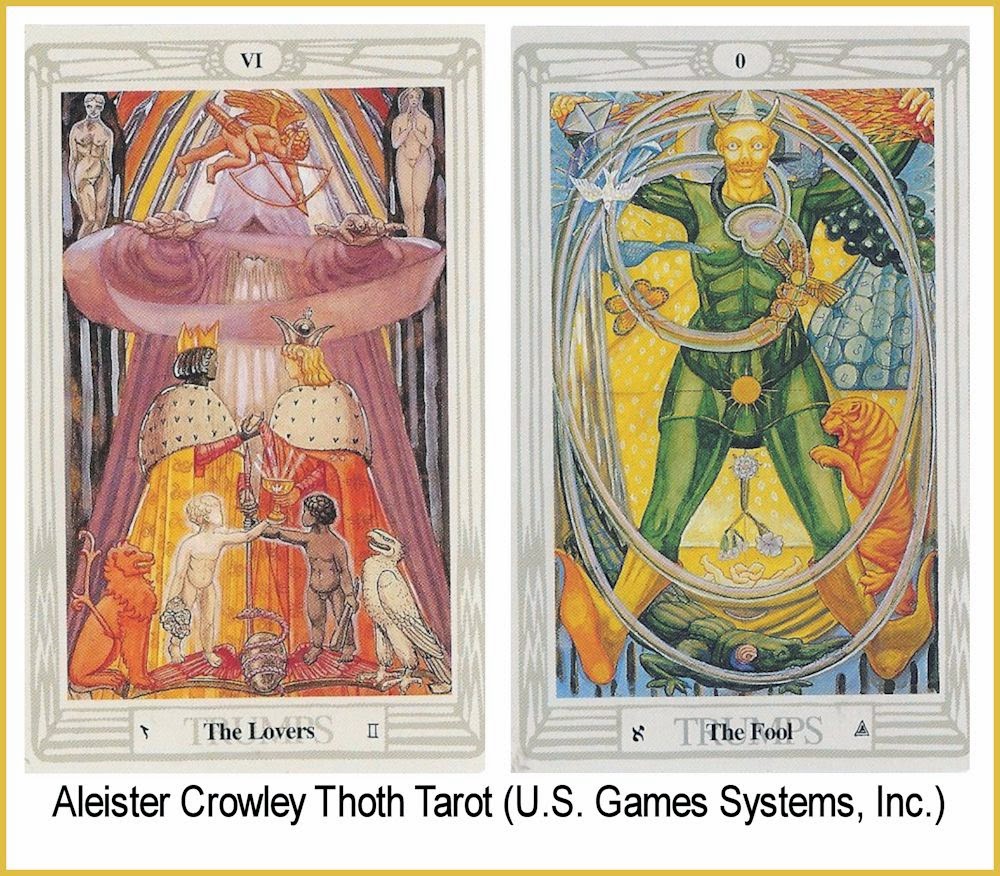 In her book The Only Astrology Book You’ll Ever Need (Taylor Trade Publishing), Joanna Martine Woolfolk writes, “Your Ascendant is the sign that reflects your outward demeanor and to a great extent determines how the outside world looks at you.” It often represents the “mask” we wear or the way we act when our defenses are up.

In the Thoth deck, we not only see “The Lovers” in Trump 6, we also see The Hermit officiating over the marriage depicted on the card between the Black King and White Queen. The Hermit (linked with the zodiac sign Virgo and the Hebrew letter Yod) contributes a creative, virile, fertile energy to this card.

Notice the white child standing with the Black King and the black child with the White Queen. These four figures together can be seen as representing the integration of opposites which, interestingly, is one of the themes of the Temperance card (Art in the Thoth deck), which is linked with Sagittarius, the rising sign in the Sibly Chart I mentioned earlier.

The Fool is commonly seen to represent birth, creation, the very beginning of something – perhaps a new idea, since the card is associated with the element Air by the Golden Dawn. On the Thoth card we don’t have The Fool gazing in the air as he steps off a cliff. However, the fact that The Fool on the Thoth card is being threatened by a tiger and a crocodile tells us that he is not in a “safe” situation, that there are risks involved, energies that may distract or block him from moving forward.

It appears that the colonies did try to reconcile the conflicting views held by the Mother Country and themselves. Indeed, before April 1775, many of the colonists hoped for reconciliation with King George III and Great Britain. But by the time the Declaration of Independence was signed, the relationship was damaged beyond repair and the colonies were ready to bring forth “a new nation conceived in Liberty, and dedicated to the proposition that all men are created equal.” ~ (- Abraham Lincoln, Gettysburg Address, 1863). That “new nation” is The Fool, independent, original, and ready to face an unknown future.

The Lovers card from the Thoth deck can be said to represent equality in that we see opposites being integrated or brought into balance. Neither the Black King nor the White Queen will rule over the other. To me, this actually foreshadows the argument of the abolitionists in the 1800s, who pointed out that the Declaration of Independence states that “all men are created equal” and that slavery was in conflict with that belief. 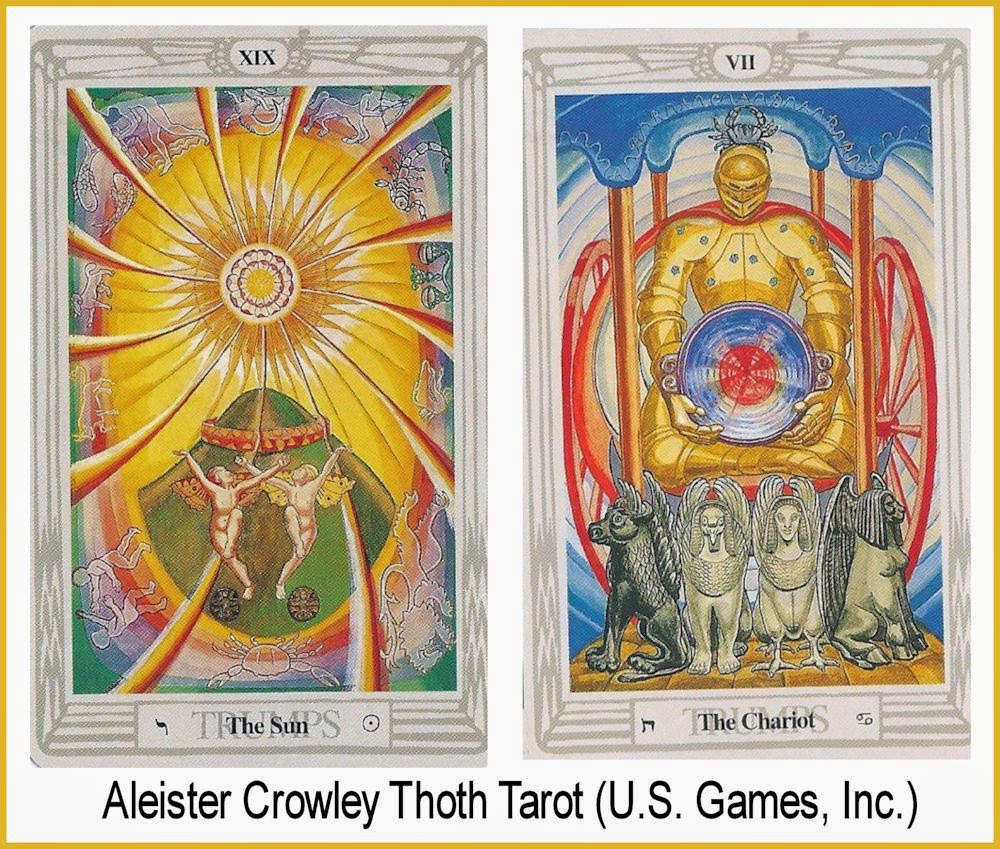 In Astrology, the Sun in a birth chart represents our general character, our ego, our identity and sense of Self. In the Tarot, The Sun is a positive, strong card associated with freedom, happiness, and good health. In The Chariot we see triumph over adversity, self-control, moving forward and taking advantage of opportunities. Cancer is a Water sign known for being sensitive, nurturing, emotional, loyal, and protective. The connection between the sign and the card can be found in comparing the protective shell on the Cancer crab with the armor, helmet, and shield used by the charioteer. Also, Cancer is a cardinal sign, which gives it the qualities of action, leadership, and outgoing activity – all of which apply to The Chariot.

In The Chariot I see a “new nation” that is fortified, armored, and steeled for whatever lies ahead, determined to direct its own path and to remove any obstacles in its way. But the armor is only necessary because the creature wearing it is vulnerable and sensitive. Cancer is the sign of home and family, concepts Americans have always held dear. America will defend its homeland and its friends with armed force if necessary.

The Moon (The Priestess) is in Aquarius (The Star). 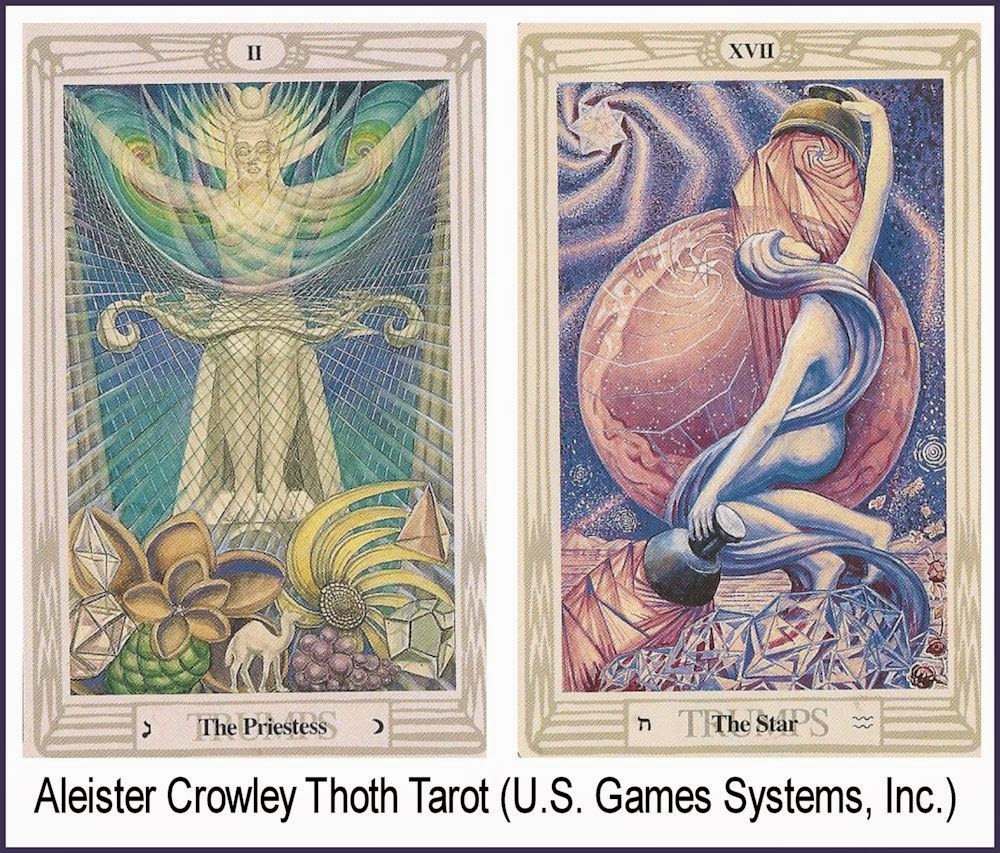 The sign Aquarius (which happens to be ruled in modern Astrology by Uranus) is known for innovation, humanitarianism, idealism, and intellect. Aquarians are often described as displaying rebellious, unusual, even shocking behavior.

The Star card in the Thoth deck features Nuith (Nuit) pouring the Water of Universal Life upon the fertile earth. Nuith is based on an Egyptian sky goddess, Nut, who was appropriated by Aleister Crowley for use in the Thelema pantheon. Crowley wrote: “Nuit is All that which exists, and the condition of that existence” and "Note that Heaven is not a place where Gods Live; Nuit is Heaven, itself."

To me, these qualities of Aquarius and The Star beautifully depict the inner spirit, emotions, and “unconscious mind” of the United States of America that was “born” on July 4, 1776 – the motivation and deepest emotional needs of the people who journeyed to and settled in the New World. What I am getting are the hope and faith and high ideals within so many of those who settled here: the sentiments that inspired the words, “We hold these truths to be self-evident, that all men are created equal, that they are endowed by their Creator with certain unalienable Rights, that among these are Life, Liberty and the pursuit of Happiness.”

The Lovers (and The Fool) rising, The Chariot sun sign, and The Star moon sign together create a picture of this country that reflects the past, mirrors the present,  and offers hope for the future.