For the Spring Equinox: A Reading with the Seasons Layout


In celebration of the Spring Equinox, I am using my Runic Tarot by Caroline Smith and John Astrop (St. Martin’s Griffin) and The Seasons Layout provided in the guidebook that accompanies that deck.

My question is, “What do I need to understand about my mother’s adjustment to her new residence?”

The positions are arranged as if on a zodiac wheel: 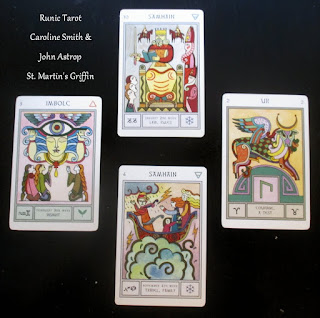 This card is linked with the third week of spring. Linked with the signs Aquarius and Gemini (3rd House), it points to shared thoughts, talking, communication, perceiving, and gathering information. Certainly all of those things have been going on in our attempt to get my 97-year-old mother moved into an assisted living facility where she will be safe and cared for. Interestingly, my husband is a Gemini and my sister is an Aquarius.

Lots of Capricorn (10th House) linked with this card, which is also linked to the second week of January, the season Winter, and the element Air. This card points to adapting to rules as well as making sure things are fair and just. Learning, understanding, and abiding by rules is an important factor in any long-term care facility. My sun is in the Sagittarius/Capricorn cusp.

(3) Autumn: appearance of fruits – the outcome
UR / COURAGE, A TEST

The rune Ur is featured on this card, which is linked to the energy of both Aries and Taurus. The card represents a time of “great energy and health,” which is an excellent outcome to look forward to.

Linked with Winter and the element Air, this card represents the 4th week of November and the zodiac signs Sagittarius and Cancer (4th House). I am pretty sure my mother will not be traveling, but there is the potential for a relationship with someone from “abroad” or perhaps a visit from relatives. These benefits are gained in part because of the “great energy and health” indicated by Card 3. Interestingly, my Sun sign is Sagittarius.

Let’s look at how THE HERMIT is portrayed in seven different animal decks. 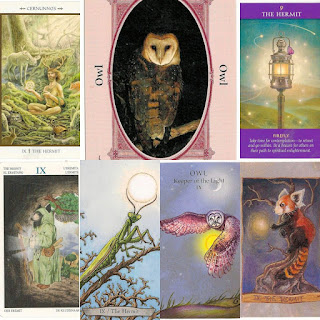 FIREFLY (“Spiritual enlightenment. The spark of inspiration. The light within. Being a light for others. Believing in the magic of life.”)

The guidebook that accompanies this deck describes the firefly as “representing the light within and flashes of great spiritual insight and inspiration,” making it an excellent candidate to play the role of The Hermit. We often focus on the idea of solitude and introspection when we discuss The Hermit, but equally important is The Hermit’s willingness and ability to “hold up his lamp” to guide others through the darkness. On the card, fireflies have gathered “in great number in order to show you just how magical life can be.”

On this card, The Hermit stands in the light, holding the sun between his antennae. Knowing that the light (sun) will always rise again, we can look forward to the light’s return after time spent alone in darkness. Leeza Robertson mentions a story told by the Bushmen of the Kalahari, in which the Mantis puts himself to sleep in order to dream a solution to a situation or problem. By the same token, we sometimes need to allow ourselves the time and space to contemplate something so we can approach it with a clear head.

OWL (Keeper of the Light): “Peer deep; find illumination within.”

Brunke’s keywords for this card are “solitude, introspection, enlightenment, wisdom.” The owl’s ability to see in the dark creates a meaningful link between this creature and The Hermit, who holds his lantern aloft to help guide others. Owls are solitary birds – no noisy flock for them! They have long served as symbols for wisdom and the inner realms of our psyche. Like The Hermit, the Owl encourages us to explore the “darkness within” as well as the outer landscape.

Ted Andrews refers to the Owl as a “creature of the night,” with night symbolizing the “darkness within – the places where great secrets and great treasures are hidden.” The fact that owls fly silently reminds us that there are times when we benefit from being silent and introspective or from being silent while listening to what is being said around us. Owls have acute hearing as well as keen vision both at night and during the day.

Cernunnos was a Celtic god also known as “the horned god.” He was typically shown with all kinds of forest animals, each of which symbolized some aspect of Celtic power. Hunt writes that when The Hermit (Cernunnos) appears, it is a reminder to “take the time to engage in quiet reflection… to learn more about yourself… to become more in tune with nature.” The goal is to “become more acquainted with a deeper aspect of your inner being.”

Of this card, Joanna Cheung writes: “He is in search of introspection, finding solace in solitude, away from society, away from culture, order, and custom as he travels on a journey of personal discovery.”

A quick internet search reveals that red pandas are solitary except during the breeding season. While it is fun to see this unusual choice for The Hermit, I have to say I don’t find much about the red panda that makes it a great choice for this card.

I think the black bear is a really great representative of aspect of The Hermit that deals with withdrawing, solitude, and turning inward, given that bears typically hibernate for several months during the winter.  Black bears tend to be solitary animals, with the exception of mothers and cubs.

In a way, I am a bit surprised that no one chose the hermit crab, but in any case, all of these are interesting and creative choices. Personally, I think I am leaning towards the Owl as the best choice.