One Card One Meaning: QUEEN OF SWORDS

For this series -- "One Card One Meaning" -- I will pull one card from a deck and offer a brief, simple *possible* interpretation -- not the ONLY interpretation, of course, but one possible interpretation of that card from that deck. I hope you will offer your thoughts on each card as well!


Today's card is from The Celtic Dragon Tarot
by D.J. Conway and Lisa Hunt (Llewellyn Publications). 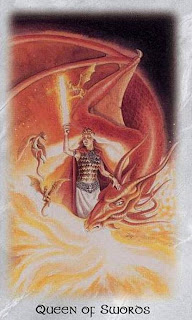 Be aware of active, powerful feminine energy in your life, whether it arises from within you or from your surroundings. 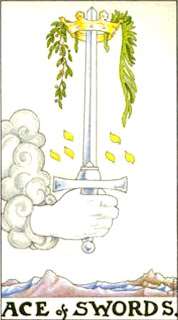 In Anna Cook's TD system, Aces represent crisis or reward. The First House in Astrology is the House of Self. It is associated with the zodiac sign Aries (a Cardinal Fire sign known for being impulsive, quick-tempered, and a natural-born leader). It's easy to see how these qualities could lead one to crisis or reward! Aries is ruled by the planet Mars (representing sexual energy, force, and aggressiveness).

Anna Cook's keyword for the suit of Swords is Challenge. She notes that "Swords indicate the effect that communications coming to you or from you will have on situations. Swords can sometimes accelerate or delay your plans. Swords make you stop and think -- they engage your intellect. Like the Air signs, Swords exemplify our communication skills as well as our ideas . . . Swords imply tension that can impel you to behave too offensively or too defensively." She adds that "self-control is the key that can transform any challenges or delays that you initiate or encounter into an opportunity to succeed."

Taking all this together, with the Ace of Swords we have crisis or reward related to Challenge. Anna Cook writes that this card means "the possibility of winning or losing even more than you expected in matters." 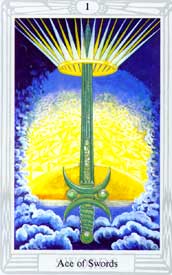 Thoth Tarot by Aleister Crowley
For Crowley and the Order of the Golden Dawn (OGD), the Ace of Swords is The Root of the Powers of Air. It is not assigned to any particular planet or sign. It can be said to incorporate the energy of the three Air signs of the zodiac: Gemini, Libra, and Aquarius. Hajo Banzhaf and Brigitte Theler (in Keywords for the Crowley Tarot) describe the energy of the card as: "Curiosity (Gemini), sociability (Libra), Intellect (Aquarius)." 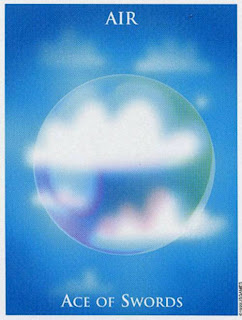 One World Tarot by Crystal Love
Crystal Love writes: "The Ace of Swords represents the element of air and expresses the powers attributable to all the air signs: Gemini, Libra, and Aquarius. . . It signifies the beginning of all new projects that require mental agility and inventive genius." Love notes that Air signs can often seem detached, cool, or aloof -- out of touch with their own feelings. They are also known for being objective and impartial.

A.E. Thierens, PhD. (Astrology & the Tarot)
Thierens throws us a curve with the Ace of Swords. He writes: "This is the first step of the element of Earth, coming on the First house or ascendant." He views this card as representing positive activity on the material plane, signifying "a decision, the end of uncertainty or twilight. . . a fresh starting point in matter. . . a strong demand, an appeal." Although this card may "cause pain and affliction" it also "annihilates doubt, the greatest torture." 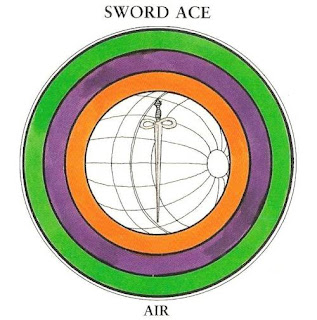 The Mandala Astrological Tarot by A.T. Mann
Like the OGD, Mann's deck associates the suit of Swords with the element Air and the zodiac signs Gemini, Libra, and Aquarius. Mann chooses the colors of the outer rings of the central image from the King Scale of Color (orange for Gemini, violet for Aquarius, and green for Libra). He titles the Sword Ace "Power in Winds of Air." Mann describes the air signs as being "unstable, wilful and self-expressive. . . expressions of pure mind manifesting as strong ideas, perception, alertness, versatility, observation, cooperation, compatibility and nervousness." Mann lists the shadow qualities of air signs as "abstraction and distance, lack of intimacy, intellectual criticism, ambiguity and lack of constancy." 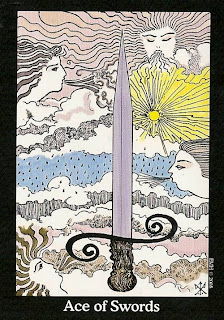 The Whispering Tarot by Liz Hazel
Liz Hazel's suit of Swords is also the suit of the Air element, embodying "rational intellect, thought processes, communication, swift changes, and movement." The Ace of Swords is not linked with any particular zodiac sign or planet in this deck. Hazel notes that this card can represent "new information or ideas. . . sharp thinking, swift changes of opinion or decision as new information arrives." She points out that this is a double-edged sword, which suggests that choices can go well or badly. Other meanings include "original thoughts that lead to preparations, projects and designs" as well as (ill-dignified) "lack of thought or consideration. . . ideas that amount to nothing. . . plans or events that are cancelled. . . bad news, upsetting situation that requires fast thinking."

From an astrological standpoint, the air signs -- Gemini, Libra, and Aquarius -- have their airy nature in common. However, they are also different from each other in many ways. For example, Gemini is a mutable sign (adaptability, versatility, openness to change, flexibility), Libra is a cardinal sign (action, initiative, leadership, outgoing activity), and Aquarius is a fixed sign (persistence, single-mindedness, determination, resourcefulness). Gemini is ruled by Mercury; Libra is ruled by Venus; and Aquarius is ruled by Saturn (and/or Uranus). These heavenly bodies have their own unique attributes and influences which can be taken into account.

Today's edition of 5W's and an H features the Dragon Tarot (created and illustrated by Peter Pracownik under the direction of Terry Donaldson / U.S. Games Systems Inc.) 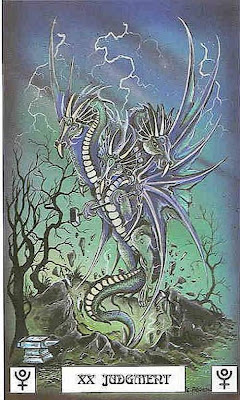 Who? Someone who needs to make an evaluation and decision about something important based on wisdom, experience, and the available facts.

What? Tremendous pressure to make the right decision about an important matter.

When? At the moment when a decision is most needed.

Where? In the realm of spirit and passion.

Why? Because the time for transformation has come.

How? With confidence, zeal, courage, and authority.

One Card One Meaning: SEVEN OF SWORDS (by Zanna)


For this series -- "One Card One Meaning" -- I will pull one card from a deck and offer a brief, simple *possible* interpretation -- not the ONLY interpretation, of course, but one possible interpretation of that card from that deck. I hope you will offer your thoughts on each card as well!

From The DruidCraft Tarot by Philip and Stephanie Carr-Gomm, Illustrated by Will Worthington (St. Martin's Press): 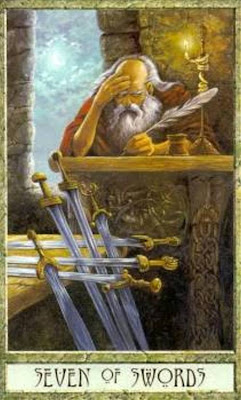 An advantage may be gained if you take the time to untangle, organize, communicate, and act on your ideas with clear intent and purpose.