Today I am using a spread I found at e-tarocchi.com called the Medicine Wheel Reading. As stated on the website: “This reading explores the energies present in your life in each area of the Medicine Wheel. Choose this spread when you need a greater understanding of the inner forces at work in your life today.” 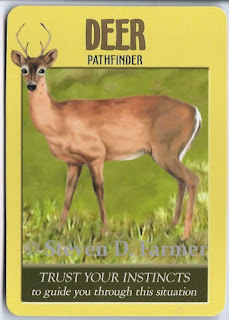 DEER (Pathfinder) – At this point in time, I am in a position or have an opportunity to find the path I need to be on, the direction or way I need to go. The key is to use all my senses to gather information, then let my instinctual self absorb that awareness without analyzing, critiquing, or studying it. Over-thinking is my enemy in this situation. There is no need to “figure it out.” Instead, I need to let my senses transmit and receive that awareness at a “gut level.”

Northern Medicine Wheel Influence
North: The animal that appears in the North shows you how to walk your talk.
Here lies your connection with your Higher Self. 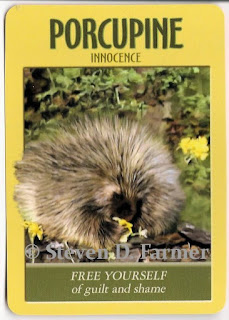 PORCUPINE (Innocence) – It appears that my connection with my Higher Self is a prickly one. The barrier may be a tendency to harbor guilt, resentment, arrogance, or feelings of being victimized. Like the quills of a porcupine, these tendencies keep me separated from my Higher Self. The key is to “see the world through the eyes of a child,” trusting my “inner mother and father” to be there whenever I need them. My Higher Self is willing and able to protect and nourish me, but first I must grant myself permission to have that protection and nourishment, no matter what I may feel guilty or resentful about.


Western Medicine Wheel Influence
West: The animal that appears in the West holds the answer
to your present challenge. 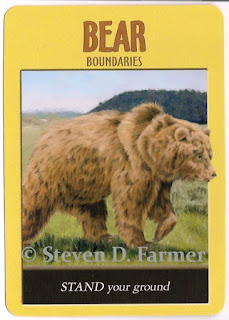 BEAR (Boundaries) – I am not consciously aware of a “present challenge” in my life, at least not anything significant. We all have many challenges from day to day and week to week. To better understand what my present challenge is and to find an answer to that challenge, I need to look to the Bear, whose motto in this deck is “Stand your ground.” This card is about defining who I am and who I am not, and letting that determine whether my response will be “yes” or “no.” Establishing limits need not alienate other people. Knowing I can say “No” doesn’t mean I have to say “No.” But in any given situation, I need to return to that initial understanding of who I am and who I am not.

Eastern Medicine Wheel Influence
East: This animal reveals the direction you need to take
in order to gain clarity about your present situation. 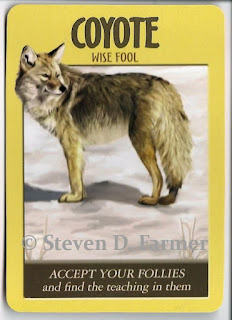 COYOTE (Wise Fool) – This card suggests that my own self-consciousness or overly serious view of myself could be interfering with my ability to gain clarity about my present situation. My tendency to attack or shame myself for foolish behavior gets in the way of discovering more important lessons and truths. Self-acceptance is not refusing to see our failings or faults; it is recognizing and acknowledging those failures and faults, and loving ourselves unconditionally. If I can allow myself to laugh at relatively minor follies, I am more likely to find the teaching in them.

Southern Medicine Wheel Influence
South: This animal explores issues dealing with your inner child,
and shows the energy needed to trust your own process. 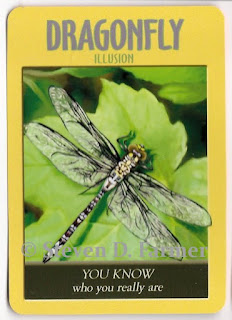 DRAGONFLY (Illusion) – My inner child knows who I really am and trusts my own process. When I am out of touch with that spirit, I may wear a mask or create an illusion about who I am, hoping that one of those personas will be more acceptable to others than my real self. The Dragonfly advises me that I need to reveal more of my true self, saving the masks or illusions for the rare occasion when they might be necessary for survival. Before I act or respond in a situation, it might benefit me to ask, “Is this who I really am?”

In summary, the messages from this group of animals are:

It has been a VERY long time since I did a “Day of the Druids” reading, which involves asking the DruidCraft Tarot and the Druid Animal Oracle what I need to be aware of today.

The positional definitions are:


Not only… KING OF WANDS 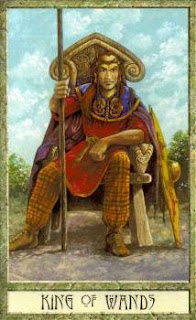 I need to be aware of areas of my life where I demonstrate wisdom, maturity, authority, and social responsibility, focusing on my accomplishments and successes. While doing this, I need to be aware of my natural optimism and enthusiasm (Sagittarius Sun), along with the importance of expressing my ideas as I make important decisions or set goals. 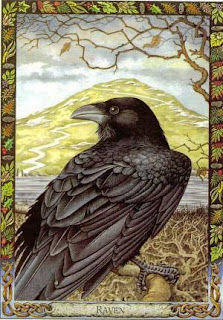 I also need to be aware that this is may be a time for initiation into the “mysteries” of something new and a death that gives way to a birth. There is an opportunity for healing and the resolution of conflicts, including some that may have long laid buried in my unconscious or my past. The Raven offers protective energy and the assurance of safety during the process of confronting that which is hidden, in other words, my “shadow side” or potentially destructive aspects of my psyche.

The DruidCraft Tarot (deck and book set) by Philip and Stephanie Carr Gomm, with illustrations by Will Worthington (Eddison Sadd Editions)

Today I’m using my newly acquired Wonderland Tarot to do a 10-card spread for a friend. To read my review of this deck, click HERE. 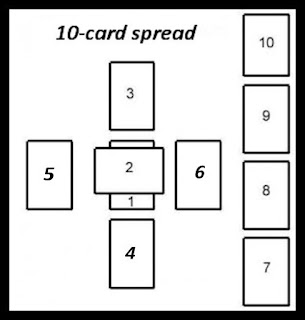 The positional definitions provided in the guidebook that comes with The Wonderland Tarot are as follows:

Are you ready? Let’s go “down the rabbit hole!”

Interesting interpretation from the LWB: “The power of life and death. The king mitigates the excesses of the queen.” I can reveal to you that the friend I’m reading for is separated from his wife, whose excessive behavior has lead to her being arrested three times and jailed once. The suit of Swords often represents attitudes, perceptions, conflict, strife, and stress. We might even see this King as representing my friend but at the very least, it most certainly represents “the atmosphere in which the questioner is presently working and living.”

Here we are being shown “the nature of the influences or the obstacles that lie just ahead.” The Six of Flamingos typically indicates a journey – hopefully a pleasant one – but in this case, I think it’s going to be a mixed bag, with some unpleasantness involved. I think my friend is looking forward to the “end” of this particular journey.

My friend’s ultimate goal or “the best that can be accomplished” is represented here by the Six of Oysters, a card linked to the physical, material realm. This card often suggests generosity and kindness “to those less fortunate.” I feel the card points directly at my friend’s goal of not “losing his shirt” to his ex in a very real, material sense. From all appearances, she does not stand much of a chance of winning anything in court (my friend took out a restraining order on her after she hit him in the head with a frying pan, requiring him to get 7 stitches). However, immediately after the physical altercation that led to the breakup, she did remove furniture and other items from the house while my friend was out.

Here we are supposedly looking at “broad and basic influences which existed in the past and upon which the present events are based.” I think this card is showing us my friend’s wishes and dreams that led to him marrying this woman in the first place and also have contributed to him staying with her in spite of her behavior, which included more than one instance of infidelity. My friend had hoped for a bright future together, fulfillment, satisfaction, and so forth. Instead, he finds himself “cutting off a bad relationship” (the reversed meaning for this card as provided in the LWB).

(5) Recent past events: TWO OF FLAMINGOS

As “the most recent sphere of influence or events that has passed or is just passing,” the Two of Flamingos points again to conflict and opposition as well as an attempt to secure a “truce.” The reversed meanings of duplicity, disloyalty, and treachery all seem to apply.

Here we expect to see “the sphere of influence that is coming into being in the near future.” As a Major Arcana card, The Moon probably represents a powerful “sphere of influence,” and it’s likely not to be an enjoyable one. At the very least, this card points to deception, trickery, deceit, false friends, and a trap. I can’t help thinking about my friend’s continued interaction with his ex-wife’s niece, who appears to sympathize with him and decry her aunt’s behavior. And yet. I feel the niece’s loyalty ultimately must lie with her aunt (family/blood), and I feel my friend might be wise to stop communicating with the niece. This could also refer to a mutual friend or friends who take sides against my friend while appearing to be on his side or at least neutral.

(7) The questioner: TEN OF FLAMINGOS

In his present position, my friend is represented by the Ten of Flamingos (Swords again – conflict, stress, strife). I often see the Ten of Swords as a sign of reaching the end of one’s wits or rope or whatever expression you care to use. Other keywords might include “a mental death, a pain that feels like a violent death, mental anguish, trouble and misfortune.” I think that applies quite well here.

In this position we are not looking at the “environment” in ecological terms but rather we are looking at “the questioner’s influence on other people and their influence on the questioner.” The Seven of Oysters (Coins, Pentacles) puts us back into the material, physical realm, where we see apparent progress toward wealth or personal gain, yet there is still anxiety or worry about possible loss. This situation most certainly does involve money and property/possessions, over which my friend and others have control or are attempting to control.

We remain in the physical, material realm to explore the questioner’s “inner hopes, emotions, desires and anxieties.” This card typically represents accomplishment and/or feelings of safety, which my friend obviously hopes to experience. Reversed, the card points to possible bad faith, villainy, danger to self or spirit… again, obviously fears my friend might harbor in this situation.

I confess, after all the Swords in this reading, I was relieved to see Temperance make an appearance to represent “the culmination and results of all the influences revealed by the other cards.” As this is a Major Arcana card, I think we are looking at a “grand finale” which implies compromise, balance, moderation, and tolerance. Unfortunately, because there is so much acrimony and conflict involved in this situation (reflected in the preceding cards), I can also see potential for a final result that includes discord, frustration, imbalance, and continued excessive behavior.

The major “players” in this reading are the suits of Flamingos (Swords) and Oysters (Coins, Pentacles) – difficulties and conflict, material and physical matters. Our triumvirate of Major Arcana cards presents a combination of hopes and dreams (The Star), deception and confusion (The Moon), and balance and moderation (Temperance). A mixed bag, to be sure, and not the easiest energy to navigate.