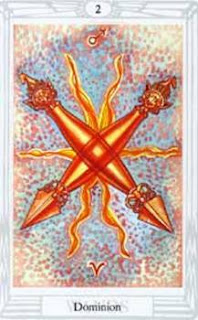 Thoth Tarot by Aleister Crowley
For Crowley (and the OGD), the Two of Wands represents the energy of the planet Mars in the sign Aries. Mars rules Aries, and is therefore very strong there. Like Book T, Crowley titles the card "Dominion." He writes that it represents "Energy initiating a Current of Force." The six flames in the center of the card symbolize the influence of the Sun, which is exalted in Aries. I like the way Hajo Banzhaf and Brigitte Theler (Keywords for the Crowley Tarot) use keywords to describe the energy of the card: "Forces of the ego, energy (Mars) spirit of departure (Aries)." I get a sense of a jumping-off point, like a rocket taking off. 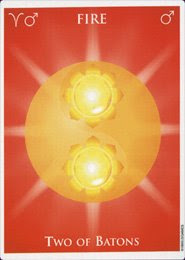 One World Tarot by Crystal Love
Crystal Love associates the Two of Batons with the first subdivision of the sign Aries, with Mars as the natural ruler and subruler. She views this energy as "great strength and determination of will. Firm rulership. Courage and initiative. Earned success."

A.E. Thierens, PhD. (Astrology & the Tarot)
Thierens described the Two of Wands as having the energy of "Air on the Second house, that of Taurus." This makes sense in that the TWO is the SECOND card in the suit of Wands. Based on this association, Thierens associates the card with "music, art, artistic ability in general; capital, riches, heavy responsibility, pressure, obsession, melancholy, fear, weakness, impossibility or material power (on one side and on the other), gloom, dullness, 'spleen,' impotence, subjection to material circumstances; attitude of 'wait and see'; the future is for those that can (afford to) wait. Country life." (Note: The system devised by Thierens is radically different from that of the OGD. I will not go into detail here, but will simply provide the astrological associations for the card under discussion. If you are interested in learning more about this system, I recommend the book referenced above.) 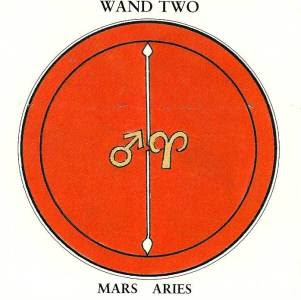 The Mandala Astrological Tarot by A.T. Mann
Like the OGD, Mann's deck associates the suit of Wands with the element Fire. Mann describes Wand Two, Three, and Four as "The Lightning of Aries." Wand Two is assigned to the First Decan of Aries -- Mars in Aries. On the King Scale of Color, the color linked with both Mars and Aries is red (in case you couldn't guess). Mann's keywords for the planet Mars are "will, desire, energy, enthusiasm, temper, arrogance, passion." For the sign Aries, his keywords are "germinating times; unfolding energy; self-assertion; initiatory energy; adventure; daring; impatience; enterprising." 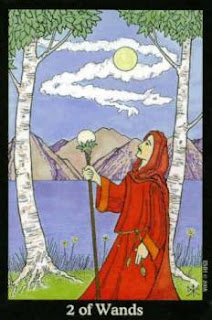 The Whispering Tarot by Liz Hazel
Liz Hazel's suit of Wands is the suit of the Fire element, embodying "ambition, vigor, creativity, travel, high spirits, and energy." She associates the Two of Wands with Mars/Aries.

In general, I find the Mars-Aries connection to be the most useful one for the Two of Wands. Mars is sometimes viewed as having destructive energy (the OGD associates it with The Tower), but Mars also carries considerable constructive energy and force. It represents sexual desire and aggression. Mars energy is enterprising and courageous, but can also be impatient and accident-prone. As the first sign of the zodiac, Aries confers leadership ability. It is also characterized as being impulsive and quick-tempered. 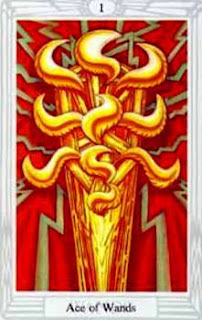 Thoth Tarot by Aleister Crowley
For Crowley (and the OGD), the Ace of Wands is The Root of the Powers of Fire. It is not assigned to any particular planet or sign. It can be said to incorporate the energy of the three Fire signs: Aries, Leo, and Sagittarius. 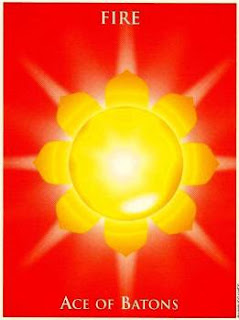 One World Tarot by Crystal Love
Crystal Love writes: "The Ace of Batons represents the element of fire and expresses the powers attributable to all the fire signs: Aries, Leo, and Sagittarius."


A.E. Thierens, PhD. (Astrology & the Tarot)
Thierens associates the element Air with the suit of Wands. The Ace of Wands represents the element of Air on the astrological First House, the house of Aries. (Note: The system devised by Thierens is radically different from that of the OGD. I will not go into detail here, but will simply provide the astrological associations for the card under discussion. If you are interested in learning more about this system, I recommend the book referenced above.) 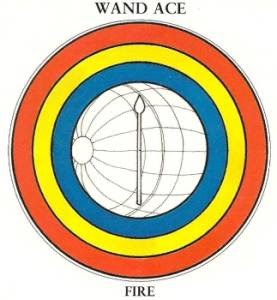 The Mandala Astrological Tarot by A.T. Mann
Like the OGD, Mann's deck associates the suit of Wands with the element Fire. Mann specifically mentions the three Fire signs of the zodiac and chooses the colors of the outer rings of the central image from the King Scale of Color (red for Aries, yellow for Leo, blue for Sagittarius). He titles the Wand Ace "Power in Flashes of Fire." 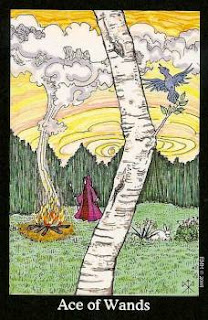 A.E. Thierens is the "odd man out" in this set, although the association of Wands with Air is not unique to him. I own several decks that make this association. It is worth noting that the astrological First House is the house of Aries, a FIRE sign. Perhaps there is no escaping the Wands-Fire connection after all! Notice all of the fiery coloring in the cards in this set. 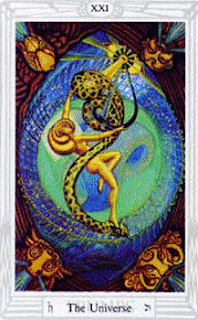 Thoth Tarot by Aleister Crowley
Crowley titles Trump 21 "The Universe," as does Book T. Crowley notes: "The first and most obvious characteristic of this card is that it comes at the end of all, and is therefore the compliment of the Fool. It is attributed to the letter Tau. . . The letter Tau is attributed to Saturn, the outermost and slowest of the seven sacred planets; because of these dull, heavy qualities, the element of earth was thrust upon the symbol." Indeed, Saturn traditionally rules the zodiac sign Capricorn, an Earth sign, as well as Aquarius (an Air sign). 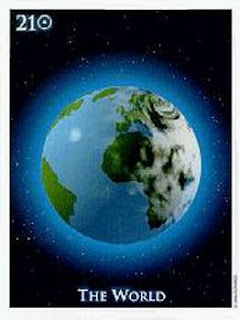 One World Tarot by Crystal Love
In this deck, Crystal Love associates The World (Trump 21) with the Sun. She writes: "Without the rays of the Sun. . . life on Earth would not exist. "

A.E. Thierens, PhD. (Astrology & the Tarot)
Thierens associates The World with the planet Neptune. In modern astrology, Neptune rules (or co-rules) Pisces, the 12th and last sign of the zodiac. Thierens writes that this card represents, among other things, "the cosmic origin of life, to which the candidate for initiation returns, and which now and then appears in dreams. . . The relations of Neptune with the Moon and the lunar body are not unknown to astrologers nowadays." 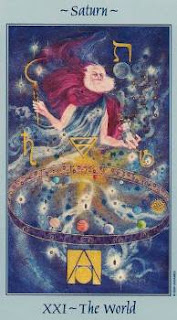 The Celestial Tarot by Brian Clark
Clark attributes The World to "Saturn, at Journey's End." He writes: "At journey's end we encounter Saturn, the Lord of Karma, acknowledging our hard-won triumphs and heroic battles. . . The planet Saturn marks the edge of the visible solar system and reminds the pilgrim of his earthly and human form, his imperfections, fears, and limitations. . . Saturn is the natural ruler of the mid-heaven, the symbolic pathway into the world and an image of the goals we strive to reach in life." 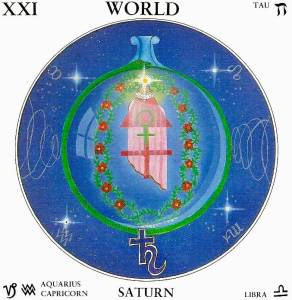 The Mandala Astrological Tarot by A.T. Mann
Mann associates Trump 21, World, with the planet Saturn. He writes: "Saturn is physical form and existence as governed by the mechanism of time. . . Capricorn is the limitation of laws made physically manifest, and Aquarius is the same laws which control and describe the divine plan to which humanity is subject." Mann points out that Saturn is exalted in the sign Libra, which commonly represents "the integration of opposites on the battleground of the self in its experience of life." 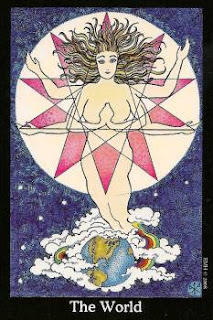 The Whispering Tarot by Liz Hazel
Liz Hazel notes that the Golden Dawn lists the attribution for Trump 21 as "Saturn." She herself associates the card with "the planet Earth, spirit or the fifth element, the quintessence." The OGD also lists "Earth" as an attribution for The World, but (as with Crowley), this is most likely a reference to the element Earth rather than the planet Earth.