Not Only, But Also with the Wisdom of Avalon

Today I’m doing a two-card spread where the positional definitions are (1) Not Only and (2) But Also. I have used this spread in my “Day of the Druids” series here on the blog, but today I’m using The Wisdom of Avalon Oracle Cards by Colette Baron-Reid (Hay House).

The question is: What do I need to keep in mind to have the best day possible tomorrow?

Not only do I need to make sure I have the highest intentions, that I take responsibility, and take pride in what I do, I also need to pay attention to my health and physical body, to appreciate the sensual world, and to avoid over-analyzing and focus on staying grounded and connected to the basics.
on Thursday, June 29, 2017 No comments:

Should I Buy a New Deck?

I have come across some awesome Lenormand decks for sale, self-published by the amazing Lynn Boyle, at www.etsy.com/shop/AquariusWellbeing . We all know that I already have enough Lenormand decks, right? (Right?) So what could be more fitting than asking one of those decks:

Should I buy one of Lynn’s Lenormand decks?

I am using a system in which cards from a red suit (hearts, diamonds) indicate a "yes” or “very likely” answer, whereas cards from a black suit (spades, clubs) indicate "no" or “not likely.”

The Celtic Lenormand by Chloë McCracken, illustrated by Will Worthington (U.S. Games Systems, Inc.) has agreed to help me answer my question with a 3-card line. (To read my review of this deck, click HERE.)

And the cards say…. 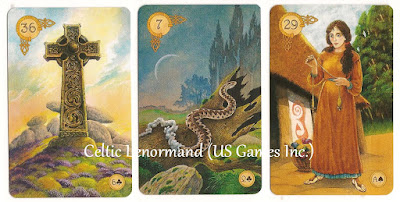 So, my first reaction to this is: “Hey, who asked you?” Then I remember… oh yeah, I did.

In Chloë McCracken’s guidebook for The Celtic Tarot, interpretation of the SNAKE card focuses on the idea of transformation or “shedding” something that is no longer useful. There is a female association to this card as well, along with the possibility that this female is either deceptive or simply making big changes in her life. If I am the female, is it possible that I am trying to “deceive myself” into thinking I need another Lenormand deck? Could the cards be saying I need to “shed” some of the decks I currently own before I think about buying a new one?

By the way, I do have several oracle decks for sale on eBay! Here are the links if you’re interested:

Back to the line of three. Looking at the first card I drew, CROSS, I personally get a strong “religious” or “religion” vibe. Secondarily, I think of the expression “a cross to bear,” suffering under a burden. CROSS can refer to the ethics of a situation or to overcoming difficulties through spirituality.

CROSS plus SNAKE: I am getting a sense of the need to transform, change, or “shed the skin” of something related to religious or spiritual beliefs.

SNAKE plus WOMAN: As I mentioned above, perhaps a deceptive female or one who is making or needs to make big changes in her life. Self-deception?

WOMAN plus CROSS: A woman who turns to or needs to turn to religion or spirituality to deal with a burden or important issue in her life.

Well, then. Please do hurry over to eBay and buy one or more of the decks I am “shedding.” Perhaps then I will get the go-ahead for one of Lynn’s decks from my cards.
on Saturday, June 17, 2017 2 comments:

In the Dream: House of Hecate

In this installment of “In the Dream” I am revisiting a spread that was created by a friend of mine many years ago (13 to be exact!) in an attempt to interpret the following dream:

In the dream, I decided to visit a witch-friend of mine to see if she ccould help me solve a problem. The only way to get into her house was to float up over the roof and call her name, which I distinctly remember was "Hecate." It was the middle of the night and very dark. I floated up over the house and called her name a few times. The roof (which was flat) opened at the middle, kind of like sliding doors, so I could descend into the house.

As you may already know, Hecate or Hekate is a goddess in Ancient Greek religion and mythology. She is the goddess of magic, witchcraft, the night, moon, ghosts and necromancy. Her name means "worker from afar" from the Greek word hekatos. In statuary Hecate was often depicted in triple form as a goddess of crossroads.

1. This represents an area of my life where I have come to a crossroad.

2. This represents a way in which I can step back and look at this situation with a new perspective (fresh eyes)

3. This represents a way in which I can forge ahead.

For this reading I am using The Book of Shadows (As Above) Tarot by Barbara Moore, with artwork by Gregorz Krisinsky, Simone Gabrielli, Franco Rivolli, Pietro Scola di Mambro, Sabrina Ariganello, and Alessia Pastorello (Lo Scarabeo). 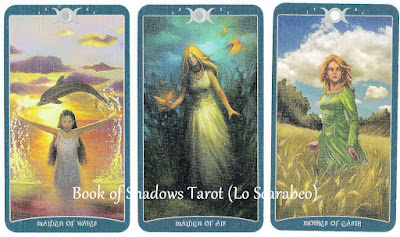 2. This represents a way in which I can step back and look at this situation with a new perspective (fresh eyes)
MAIDEN OF AIR
The Maiden of Air calls attention to my words and thoughts, world view, philosophy, and outlook on life. Like the Maiden of Water, she encourages a joyful, spontaneous approach. Certainly looking at a situation with fresh eyes can mean re-examining or analyzing the way I think about it, even the way I “talk to myself” about it. Am I sharp and divisive or uplifting and refreshing?

3. This represents a way in which I can forge ahead.
MOTHER OF EARTH
When the Mother of Earth “forges ahead,” she does so with determination, consideration, and purpose. She does not run or “leap before looking.” She manifests the feelings and thoughts referenced by the Maidens of Water and Air, seasons those feelings and thoughts, and turns them into real-world results. At the same time, she moderates and gently manages that maidenly, immature energy, nurturing and encouraging growth.

I am, quite honestly, blown away by the fact that this reading -- named after the goddess Hecate, who is often depicted in triple form -- called forth three female characters, two Maidens and a Mother. Wow. The crossroads in question seems to exist at an emotional or subconscious level that can be brought into the light by communication between my conscious mind and subconscious mind. The practical, grounded energy of the Mother of Earth can bring the result of that communication into the physical, material world, where it can thrive.
on Monday, June 12, 2017 No comments:

Sherlock Holmes Card of the Day - 5 of Observation

The Sherlock Holmes Card of the Day is:
FIVE OF OBSERVATION
(5 of Swords) 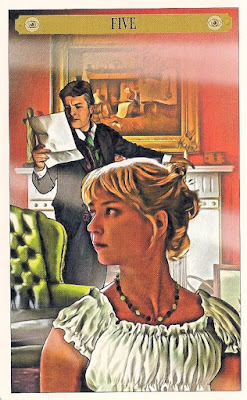 The Holmesian Wisdom for the Five of Observation is: “…the motives of women are so inscrutable” from The Second Stain. The card shows a “distressed lady” (the débutante Lady Eva Blackwell) pleading with Holmes to retrieve her indiscreet letters, a scene from the story The Adventures of Charles Augustus Milverton. Milverton, "the king of blackmailers," demands £7,000 (over £800,000 in 2015) for the letters, which would cause a scandal that would end Lady Eva's marriage engagement.

The Five of Swords has much to do with deceit, slander, and unethical activities, making this an excellent choice for the Sherlock Holmes Tarot card.

The book that accompanies this deck also provides interpretations for each card under the headings “The Game” and “The Fog.” The former elaborates on the upright keys, while the latter expands on reversed meanings. Examples from “The Game” for the Five of Observation: “theft of your identity… humiliation from treachery or cowardice… sloppy or malicious thinking may cause things to go awry.” Examples from “The Fog”: “re-establishing your hard-won reputation…being alert to the signs of treachery…an advocate or witness who supports you… getting to the bottom of a web of envy or malice.”