Let’s look at how THE CHARIOT is portrayed in seven different animal decks. 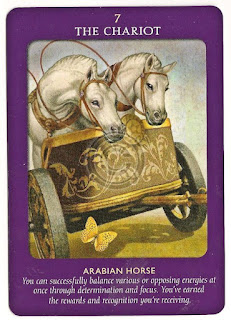 In this deck, the Arabian Horse is meant to represent “the balance of strength and intellect,” and like The Chariot in traditional decks, success depends on the ability of the driver of the chariot to guide opposing forces or energies forward together in the same direction. The image on this card does not show opposing energies pulling against each other. Rather, we are meant to consider the Arabian horses themselves as symbols of grace, intelligence, passion, and confidence.


ORCA
You have to pay just as much attention to the energy that creates
your movement, as the direction of the movement itself. 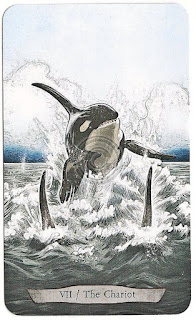 To capture the essence of The Chariot, this deck describes the manner in which Orcas (Killer Whales) hunt. The pack travels together, using speed, diving techniques, and tail movements to master their environment and capture their prey. They not only know which direction to go, but the types of movement and behavior to use to achieve their goal. With each movement, ripples are created that affect the surrounding environment and everything in it. 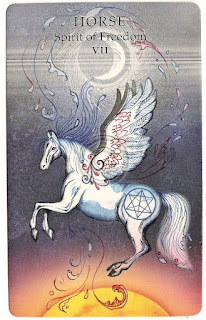 Keynotes for this card in this deck are “Power, Balance, Alignment, Control.” The equine association with the traditional Chariot card is picked up in this deck, with the addition of wings. The message is similar to the traditional Strength card in that we are encouraged to control our direction in life with calm focus rather than trying to force or fight our way along. Brunke writes: “We are the vehicle that carries our soul through life. Nurture courage, self-authority, and poise to lead yourself.” We are encouraged to “align divergent energies and direct movement through inner balance.” 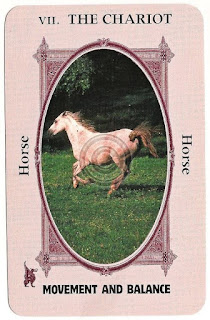 Here again we see the importance of both movement and balance in The Chariot. We may be very good at “movement” but if that movement is undisciplined, out-of-control, and fraught with inner discord, we are not likely to get where we want to go. Harnessing and guiding our raw power and passion is necessary in order to go in a specific direction. The idea of balance is further represented by the fact that horses have four legs, giving them stability and balance in their movements. 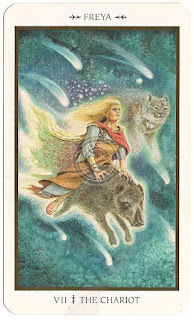 In this deck, The Chariot is represented by the Norse goddess Freya riding a golden boar, an emblem of her power. She is assisted by an emerging lynx, whose exceptional eyesight guides her. Freya’s beauty, determination, and powerful spirit are, of course, legendary. Her energy inspires us to find a purpose in our actions and to pursue that purpose as we continue on the path we have chosen. 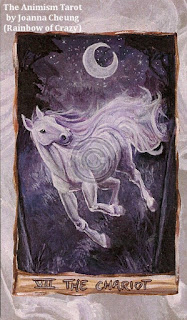 Like others, this deck chooses the Horse to represent The Chariot card. The image shows a lavender-gray horse flying in a deep purple, starry sky as a crescent moon shines above. Cheung’s keywords reinforce the message we associate with The Chariot. Rather than trying to rephrase her poetic description, I will quote part of it here: The horse “is the journey: the road travelled and the obstacles ahead. He is the will, willing himself to triumph.” 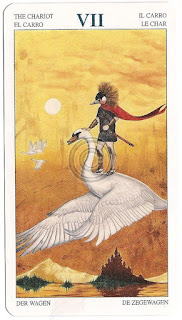 As I have come to expect, this deck gets the prize for the most interesting and unexpected imagery for The Chariot. Symbolically, swans commonly symbolize peace, tranquility, loyalty, strength, beauty, grace, and love. Cranes are viewed as symbols of vigilance, longevity, wisdom, fidelity, and honor. These are the qualities, then, that can help us reach our destination.

I’m not surprised to see the Horse take the lead in this group of animals. It is interesting to think of myself as a horse, steering myself, rather than someone driving a chariot pulled by horses. I like the image of the pack of orcas working in concert towards a goal. Freya riding her boar works pretty well for me. The swan and crane are, well, fun. Which one is your favorite?

So far, the cards have basically hedged their bets by giving me a mixed Yes-No response. As in August, I am going to use a 5-card line I saw in Sylvie Steinbach’s book The Secrets of the Lenormand Oracle.

My question, once again, is "Will an assisted living apartment become available for my mother in the next 30 days?" This time, I am using The Under the Roses Lenormand by Kendra Hurteau and Katrina Hill (U.S. Games Systems, Inc.)

For this technique, I decide which card represents the issue being explored. The HOUSE card is typically used for issues related to moving or changing residence. I choose any card, at random, from the deck and turn it upright. I keep doing that until I pull the HOUSE card. I keep the two cards I pulled immediately before I drew HOUSE. Then I turn over two cards after that to create a 5-card line with HOUSE in the middle, and the two cards drawn immediately before and after HOUSE on either side.

I use the suit associations for my initial interpretation, with Red suits (hearts, diamonds) meaning "Yes" and black suits (clubs, spades) meaning "No."

Here is the result:

This time, it appears that the answer is “probably YES” (four red cards, one black).
A crossroads will be reached, a time for personal growth and reflection that leads to a place where one is most comfortable, complete with good fortune and longevity, but not without worries or suffering.

3 Reasons Not to Get a Tarot Reading


There is a lot of advice out there to help us determine when it might be a good idea to get a Tarot reading and when the type of insight and advice that Tarot provides might be beneficial to our lives. There is less discussion out there about when a Tarot reading may not be the right decision.

This is because usually when your intuition leads you to believe that you should have a Tarot reading it is a good idea, it is an appropriate time for a reading. But there are times when our intuition is clouded, or our experience with Tarot makes us think that we need a reading, when in fact it should be avoided. Let’s have a look at three times when you should avoid having a Tarot reading.

1. You aren’t in the right state of mind

Gaining this insight relies on pulling on the intuition of the reader and your own intuition in order to better understand what is happening. If your intuition has been compromised for some reason, this can interfere with your Tarot reading, sometimes leading to further confusion rather the clarity.

If something is clouding your mind, this can be a bad time to have a Tarot reading. The most common reason you might not be in the right state of mind for a reading is that you are very emotional or depressed. For example, in the wake of a heated argument with a loved one or colleague, if you are particularly hot tempered you might be seeing red, and this will interfere with your intuition. It is best to wait until the dust has settled before having a reading. If you are suffering from serious depression, which is clearly dust that just won’t settle, it is best to seek professional help to deal with this before consulting the Tarot.

For similar reasons it is best to avoid a reading when you are drunk or otherwise intoxicated. This similarly clouds your mind, and also limits your access to your intuition. While they say that your true feelings come out when you are drunk, you also just don’t have access to all your facilities. Without clear access to your intuition you are probably just wasting your time and money, not to mention damaging your relationship with your reader.

2. When you have already made up your mind

Tarot is about getting a new, deeper understanding of a situation to develop a new perspective. If you have already decided what a situation means, a Tarot reading will be of little help. Like being overly emotional, your certainty about what is happening or what an outcome will be will influence the accuracy of the reading. According to Numerology Sign, even if you can get an accurate reading, your stubbornness will limit your benefit from the reading.

To get the most of a Tarot reading you need to approach it with an open mind, letting yourself see new possibilities and opportunities. We aren’t talking about simply desiring a certain outcome, many of us have this desire a lot of the time, it is more a refusal to believe that a current situation may be different than what we assume, and that the outcomes of particular actions may be different that you desire.

3. When Tarot has become a crutch

While Tarot is there to help us make better decisions, and while it can help us when we are stuck to make a difficult decision, if you find that you have reached the point where you can’t make any decision without the assistance of Tarot, it is time to take a break.

Tarot helps us gain clearer access to our intuition, but our intuition is with us always and we should have a level of access to it at all times, helping us in the moment as needed. When you start to second guess the decisions that you make and need to double check them with the Tarot, you have become too dependent.

The philosophy of the Tarot is that you are the master of your destiny and take control of your world with the decisions that you made. If you sacrifice your personal power to the Tarot deck, it is no longer serving you.

A sign that you have become overly dependent on Tarot is when you think that Tarot is the best first response to situations like illness or threat, when your first call should be to a doctor or the police. You may want to get a reading later to better understand the situation, but a Tarot reading should never come before dealing with the practicalities of an emergency situation.

The other time you should consider at least delaying a reading is when you don’t get a good feeling from the Tarot reader. Not getting a good vibe from a reader does not mean that they are a bad person, or a bad reader, but that your energy is not compatible, at least not at this moment, which means that your reading will be less fruitful. This can mean that perhaps you should return at another time, or that you should find a different reader whose energy is more compatible with your own.

As Tarot is all about intuition, trust your intuition when it comes to when you should or shouldn’t have a reading.