Now let’s look at how The Magician is portrayed in these seven decks. 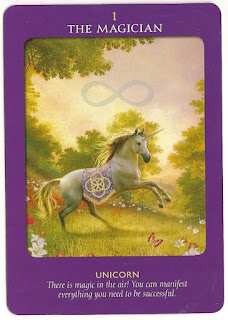 UNICORN (“There is magic in the air! You can manifest everything you need to be successful.”) -- A great choice for this card, in my opinion. The unicorn is a magical creature, held sacred by people since ancient times. As The Magician, the unicorn encourages us to see ourselves as being above what is normal and “regular,” able to direct and channel the energies we need or desire to use to accomplish whatever we wish. The art does not incorporate the “Cup, Wand, Pentacle, and Sword” symbolism used in traditional versions of The Magician, but the unicorn does have that marvelous horn that can serve as a magic wand. 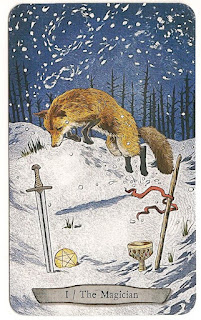 FOX – Robertson draws a comparison here between the fox, who knows how to find food, even though it cannot be seen beneath the winter snow, and The Magician, who also knows “there is more available to them from the world they live in than what the physical eye can see.” The art depicts a fox mid-air above the four elemental symbols. This fox, Robertson tells us, has sensed a food source that can’t be seen and is leaping up to pounce on it. It seems like this is a bit like using “The Force” in Star Wars. 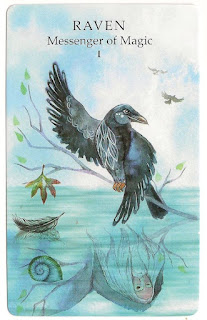 RAVEN (“Messenger of Magic”) – Brunke offers “Transformation, Creation, Illumination, Conscious Magic” as Keynotes for this card. The message she assigns to the card is “Feel, trust, and use the force within you.” (See my Star Wars comment above.) The art shows a raven with “one wing swept upward to Spirit, one lowered to Earth,” the traditional pose of The Magician. The four elements are represented by a Shell, Branch, Fossil, and Feather. Ravens are known as highly communicative birds, making them a great choice to act as a channel to divine wisdom (“As above, so below.”) 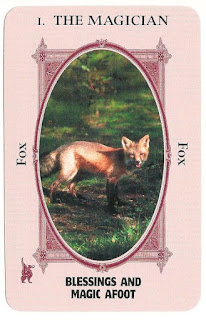 FOX (“Blessings and Magic Afoot”) – We now come to Ted Andrews, whose Animal-Wise Tarot names the Fox as The Magician. Andrews views the fox as a creature “revered at some time by every society in which it was found.” In a slight twist to the idea of a fox being aware of things that can’t be seen, the Animal-Wise fox offers “quiet invisibility,” the art of camouflage, the better to see and hear things we might otherwise miss. Heightened senses (including psychic senses) are an important part of this Magician card as well. 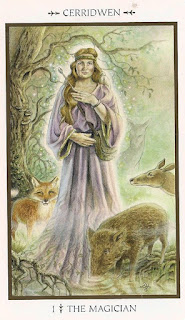 CERRIDWEN (creativity, learning magic, directing energies) – Rather than a single animal, Lisa Hunt chooses the ancient fertility goddess Cerridwen. The art shows the goddess surrounded by a fox (cunning), a deer (rejuvenation), and a boar (fertility, strength, magic). The “animal” aspect comes into play further when we read the story of Cerridwen (in the shape of a greyhound, then an otter, then a hawk) chasing Gwion Bach (in the shape of a first a hare, then a fish, then a bird). The moral of the story is about the value and dangers of gaining knowledge and the significance of how that knowledge is used. Cerridwen holds a wand on this card, but we do not see the other elements or symbols that traditionally appear on The Magician. 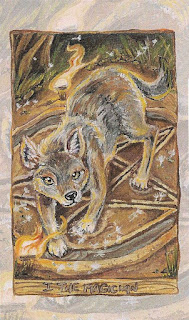 COYOTE (skill, cunning, power, instinct, transformation, action) – Although I would not recognize the creature on this card as a coyote, that is indeed what it is meant to be. The usual ‘trickster-Magician” analogy applies. Look closely and you will see the four elements represented by a huge pentacle beneath the coyote’s feet, fires flickering around him, water running alongside him, and a “powerful wind” that “flows and fills him with renewed energy.” 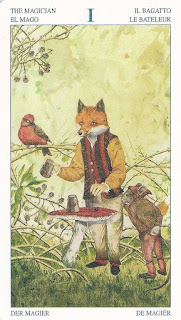 FOX – Last but not least, Tarot of the Animal Lords gives us a Fox for our Magician. Characteristics listed in the guidebook: “shrewdness, will to succeed, lack of prejudice; errors, lies.” Giannini does not give us the traditional tools (elements) of The Magician. Instead, Mr. Fox performs a familiar magic act using two cups and a marble. A bird and a mouse observe.

The tally shows The Magician represented by:


While I do lean towards the Fox as my favorite, I also like the Raven and Unicorn quite a lot. Which one works best for you?