Loved One on the Other Side - Tarot Reading

Today I’m doing a reading that I came across on Jeanne Mayell’s website at https://www.jeannemayell.com/

This spread is designed to explore a possible connection with a loved one who has passed on. It's called _LOVED ONE ON THE OTHER SIDE_.

It seems appropriate to use David Corsi’s Ghost Tarot (Lo Scarabeo) for this reading.

Jeanne Mayell does not provide a layout, so I decided to use a simple “diamond” shape, as follows: 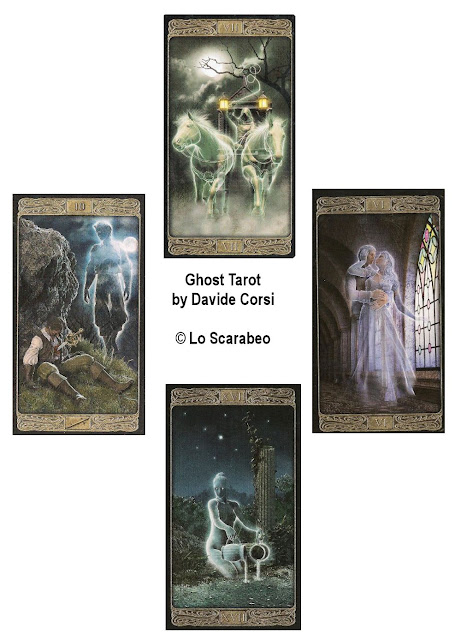 THE CHARIOT: I get the sense here that my loved one is moving forward towards a destination. I am not certain if he is the driver of the chariot or a passenger, though. The driver guides the horses along the road, sure and steady. This is such an interesting image. The “death coach” is part of the folklore of north western Europe. It is particularly strong in Ireland but is also found in British and American culture. It is said to warn of imminent death or, in some cases, to collect the souls of the dead.

(2) Anything my loved one wants to say to me.

TEN OF SWORDS: There are thoughts, conflicts, and perceptions that I need to release, to let go. I may need to even “let myself go” in the sense of focusing less on my own anxieties and insecurities. My loved one has let go of his earthly form and existence, and perhaps I need to release some of the things that tie me down or limit what I can do and what I can be.

THE LOVERS: On the other side there is union and harmony. I get the sense here that those who have passed make choices or decisions about where they will go and what they will be on the other side.

(4) How can I best support my loved one?

THE STARS: I can look towards the sky and keep hope always in my heart. I can seek the world of the spirit, of “the heavens,” to maintain a link to my loved one and to all who have gone before me.  In a way, it is strange to think about “supporting” someone who has passed, but that is what we need to do in order to smooth the way for them – as opposed to refusing to let them go or causing them unrest with our attitudes and actions.

This is a compelling group of cards, with three from the Major Arcana – appropriate when dealing with such a substantial subject. The Ten of Swords also has a lot of meaning and weight here.

First of all, I need to make the usual disclaimer about Tarot readings and legal matters. I NEVER recommend using a Tarot reading for legal advice. There are experts in that field called lawyers or attorneys, and they are the ones who need to advise you on legal matters.

The reading I am doing today here on the blog relates to an upcoming court hearing that involves members of my family (not me directly). Lawyers are already involved. What I want to do is ask the cards: What can you tell me about this court case?

To do this, I am going to create positional definitions that will hopefully shed some light on the energies and “possibilities” or “potential” for this hearing. Before pulling cards, I decided, in my own mind, who is “Petitioner #1” and who is “Petitioner #2.”

For this reading I am using Tarot of the Mystic Spiral by Giovanni Pelosini, with artwork by Giuseppe Palumbo (Lo Scarabeo). 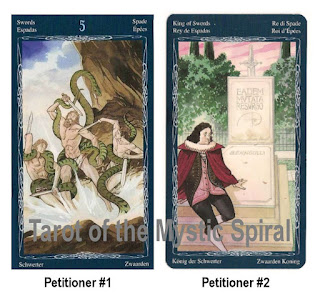 This is a card of conflict and self-defense, a clash that results in victory for one side and defeat for the other. I can tell you that Petitioner #1 in this case sees herself clearly as being in a position of self-defense, fighting to get what rightfully belongs to her (in her mind). She must prove not only her point, but herself during this process.

A card of patience and endurance, the King of Swords is known for being fair, logical, analytical, just, and honest, capable of clear thinking and clear expression. Petitioner #2 comes from a position of strength and power, justice and fairness. The key is to remain alert and to stay the course.

(3) True nature of the conflict: ACE OF SWORDS 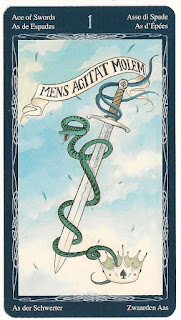 With Swords being the suit of the mind, we can see that the true nature (or root cause) of this conflict lies in the perception and point of view of each party – the way each party thinks about this situation. The outcome of this court case will determine a “new beginning” for both parties at many levels. They are fighting over their different ways of perceiving and interpreting that which is basic and fundamental. 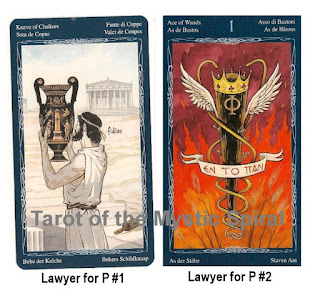 (4) Lawyer(s) for Petitioner #1: KNAVE OF CHALICES

The Knave of Chalices represents Petitioner #1 (Five of Swords). The Knave ( also known as Page) suggests the possibility of youth, inexperience, or immaturity. There is a focus on emotions (Chalices) that may not be helpful in this court case. From an elemental standpoint, we have Air (Petitioner #1 / Swords) and Water (Lawyer for Petitioner #1, Chalices). These two elements are considered “somewhat friendly” or “neutral” – suggesting that the relationship may not be productive or have the desired effect. On the other hand, the Knave of Chalices could be the “cooler head” that prevails over the client’s aggressive, fiery nature.

In general, I would say having an “Ace” as one’s lawyer is a positive sign. From an elemental standpoint, as the lawyer for Petitioner #2 (Swords/Air), the Ace of Wands (Fire) offers moderate mutual support – not the greatest or most powerful (which would be if they were the same element), but the next best thing. Fire and Air are powerful allies, both active and action-oriented. The Ace of Wands is often viewed as a card of opportunity.

(6) Judge scheduled to hear the case: THE HIGH PRIESTESS 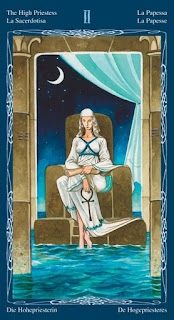 How appropriate is this? The only Major Arcana card in the reading and The High Priestess, no less. This is a highly intuitive judge, one who can be trusted to make wise, knowledgeable, illuminated decisions. This is someone who can find the middle path between extremes, someone who looks beyond the obvious. 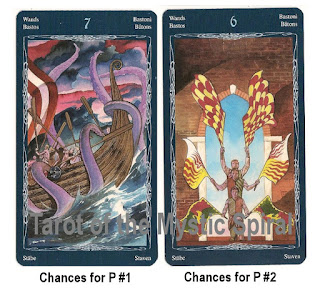 (7) Chances that Petitioner #1 will win: SEVEN OF WANDS

Once again we have a card of self-defense for Petitioner #1. This card is about defending one’s position, protecting one’s turf, and holding one’s own against adversaries. To me, this card suggests that Petitioner #1 will be left feeling that they did not win, that they did not get what they want, deserve, or need from this case. Backed into a corner, they are left continuing to defend themselves, whether by appealing the decision or some other approach.

(8) Chances that Petitioner #2 will win: SIX OF WANDS

It’s hard to find a more “victorious” card than the Six of Wands. Triumph, victory, and a joyful conclusion to a situation are all standard interpretations of this card. Good news, success, achievement. I am going to say the chances are very strong that Petitioner #2 will win this case. 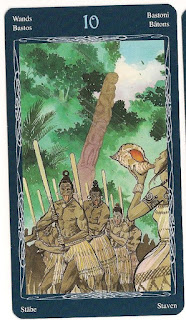 I usually interpret this card as being about burdens, being overburdened, stretched too far. There is no question that both petitioners in this case must be feeling this way. The energy for both is a continuation of stress, heavy spirits, and exhaustion. Both parties have many other responsibilities in their lives, and the added burden of this court case is wearing them down. This situation is heading swiftly towards a climax or turning point.

(10) Possible Final Outcome based on current conditions: KNAVE OF WANDS 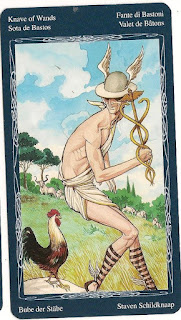 The Knave (Page) of Wands is often about official communications: news of a decision or conclusion to a matter. I think we can see this as the judge’s verdict being communicated fairly quickly (Wands/Fire). As an outcome, I am not getting a clear sense of this card being favorable more towards one petitioner than the other. Both petitioners are represented by Swords cards, which are mutually supportive with Wands. We might say that a Wands card favors the lawyer for Petitioner #2 (Ace of Wands) more than the lawyer for Petitioner #1 (Knave of Chalices / Water). Not only that, the caduceus symbol is a central image on both the Ace of Wands and Knave of Wands in this deck. Perhaps the outcome will favor Petitioner #2, thanks to their lawyer?

Lots of Wands in this reading – certainly appropriate given the type of energy dominating this situation. We have boldness, ambition, drive, competitiveness, and initiative. Actions are being taken or suggested; change is in the works.

The judge (High Priestess) is a Water card, which could suggest sympathy or support for Petitioner #1’s lawyer (Knave of Chalices), but perhaps not enough to affect the ultimate outcome.

I do think that, overall, things look more positive for Petitioner #2. Time will tell.
on Wednesday, November 08, 2017 4 comments:

Listen to the Animals: KIWI

If you are interested in finding out who your own Animal Guides are, you can get an Animal Guides Reading through my _Etsy shop_ or my _Web Site_.
https://www.etsy.com/listing/83334186/animal-guides-reading
http://zannastarr.weebly.com/animal-guides.html 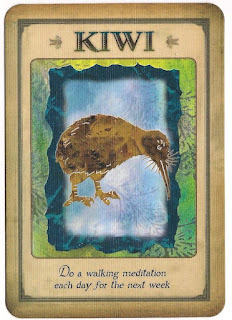 Our animal today is the KIWI, a flightless birds native to New Zealand. For those of us on the other side of the world, who may never have seen or heard of this creature, the kiwi is approximately the size of a domestic chicken. Fun fact: Kiwis are by far the smallest living ratites (which also consist of ostriches, emus, rheas, and cassowaries).

For this card, Steven D. Farmer has chosen the message, “Do a walking meditation each day for the next week.” Farmer describes “walking meditation” as a slow, thoughtful walk for ten minutes or more, preferably in Nature, with your goal being to stay present and aware of your steps and contact with the ground while also being aware of the sights, sounds, and smells as you walk.