Review: Art Through The Starstream Oracle 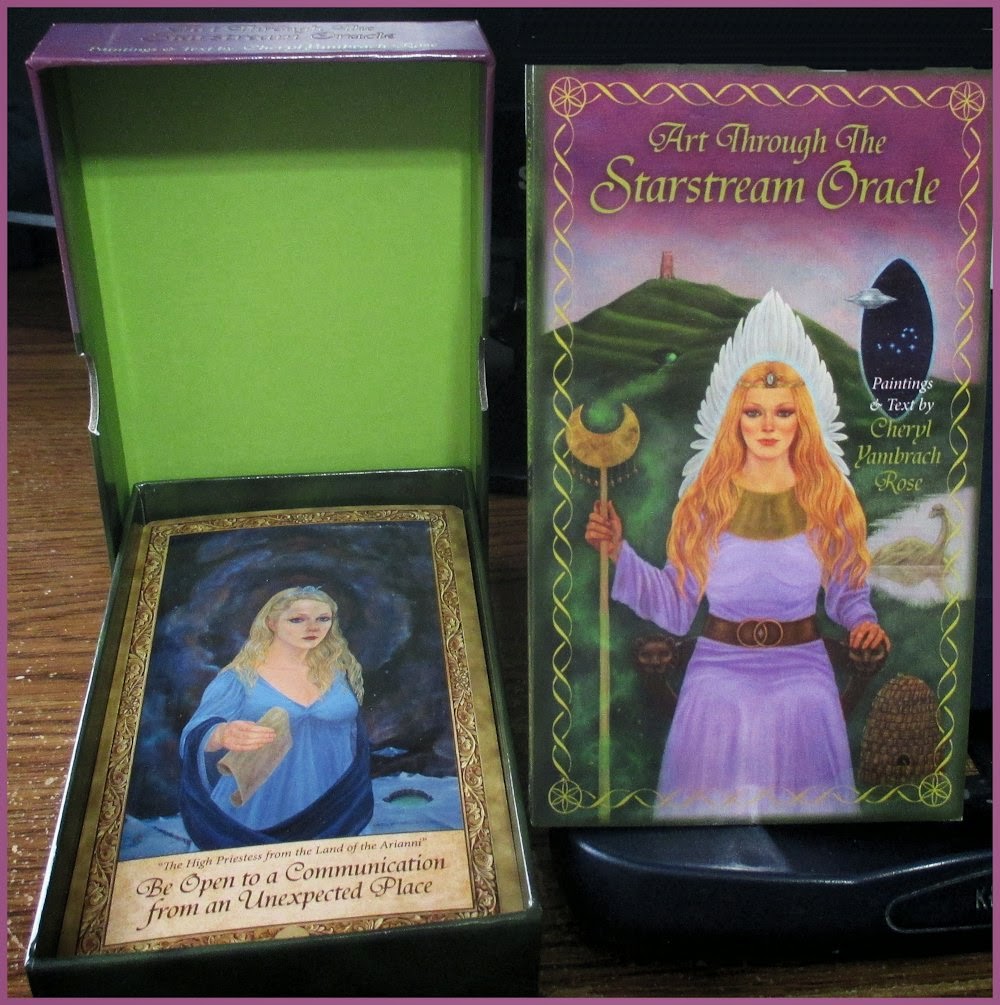 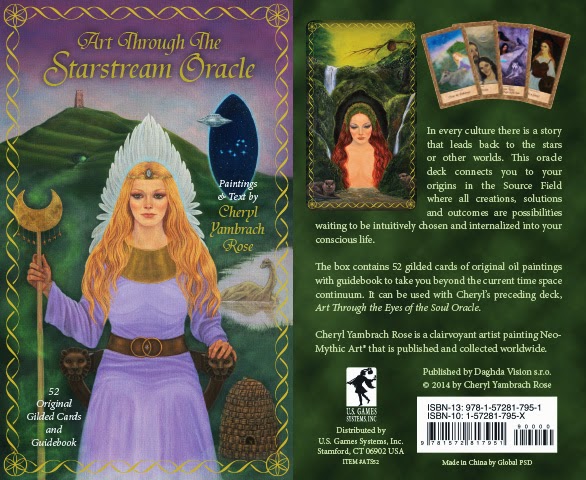 The things I love about this deck and book set include the art, which is stunning, and the accompanying booklet, which contains information about a huge variety of mythological, spiritual, and mystical people and entities. I enjoyed reading the booklet from cover to cover, and I am now enjoying studying the cards individually and in the spreads provided by the booklet.

Among my favorite cards (along with their Expanded Meanings and a few lines from the booklet) are: 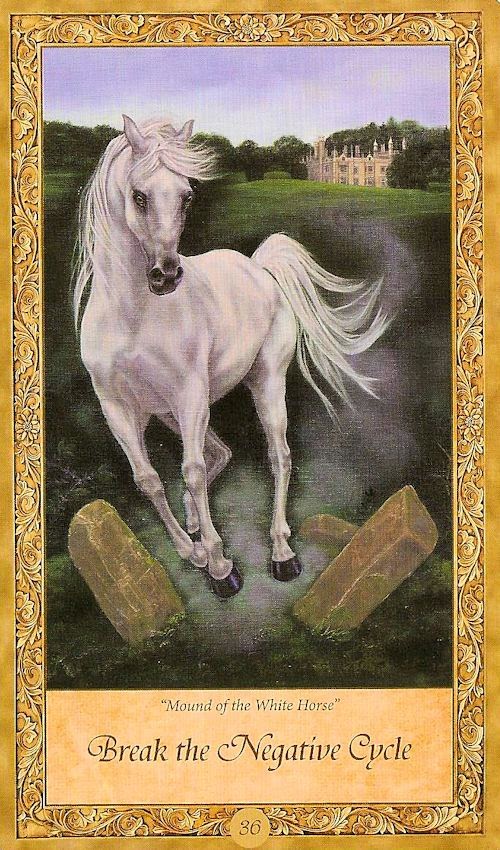 “Mound of the White Horse” Expanded Meaning: “Enough is enough. Have the courage to break free and create a new paradigm in your life. Leave the invalidators and abusive situations behind. No more sacrifices.”

“In County Down, Northern Ireland there is a large mound on the grounds of Narrow Water Castle near Carlingford Lough. It is called the Mound of the White Horse. In very ancient days, it is said the area was visited by Egyptians, Africans, Phoenicians, and Vikings…” 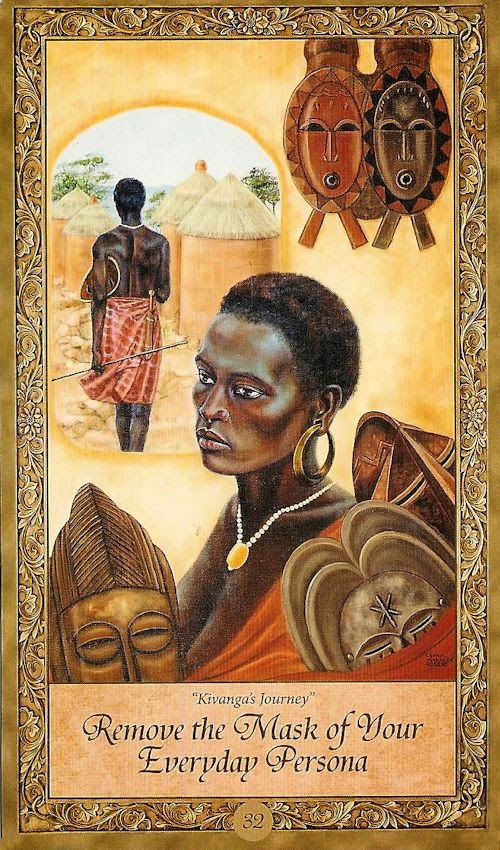 “Kivanga’s Journey” Expanded Meaning: “Magic and ritual can sometimes help to be able to act out a different scenario in another realm of existence. The use of mythic symbols and costumes allow you the freedom to recreate or ‘try it out’.”

“According to myth, a race of giants lived in the Congo. One of them was called Kivanga. He used sound, frequency and magic to pass through the veil to the underworld to rescue his twin sister who had been taken in marriage by a different tribe or race of beings…” 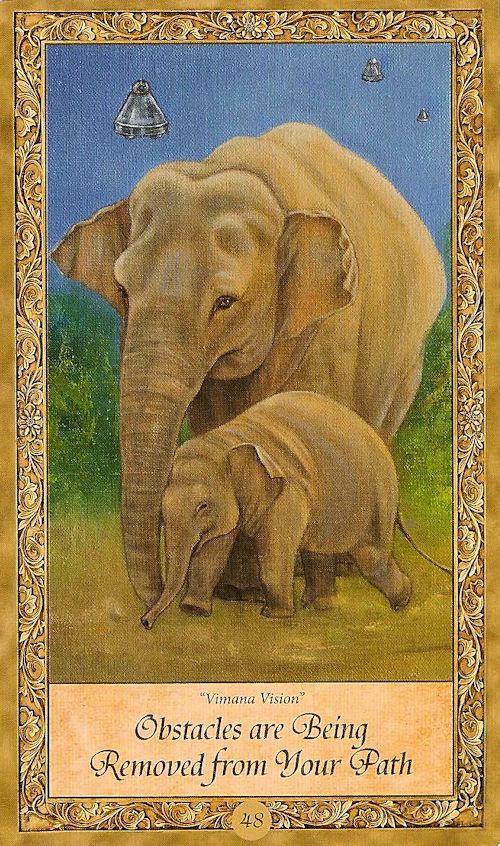 “Vimana Vision” Expanded Meaning: “Be happy. Unseen forces are at work. Stay on the positive timeline for best results. Many levels are involved and they are working in tandem for the most beneficial outcome.”

“Elephants are sacred animals. To the Hindus, they are the living incarnation of their God Ganesh. Each part of the deity has a symbolic function. . .” 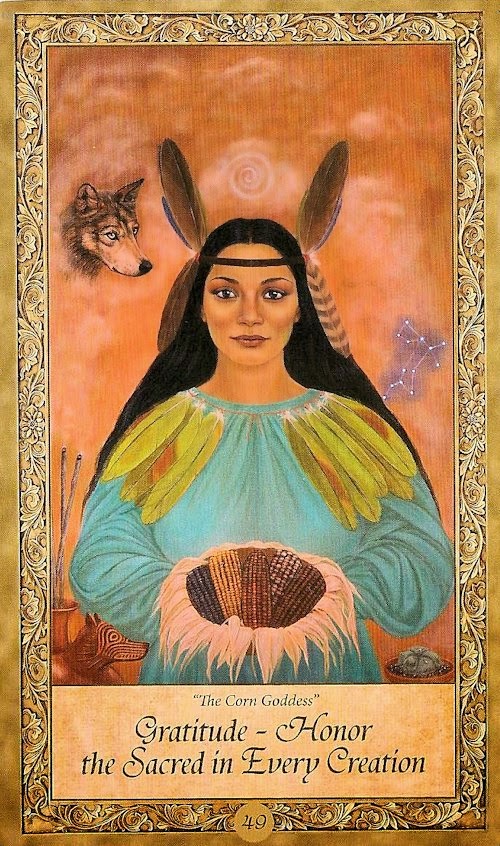 “The Corn Goddess” Expanded Meaning: “Identify with and personify the Corn Goddess. She represents the balance of nature as the young girl, the life giver, and the wise woman.”

“I met the wolf people in Mexico. Called the Huichol or Wixaritari, they believe they come from wolf shamans originating from the dog star Sirius. . .”

In every culture there is a story that leads back to the realm of the stars. This stunning 52-card oracle deck helps you reconnect with your origins in the stars, the source of all creativity. Through her artwork, inspired by mythology and history, Cheryl taps into insightful cosmic connections. Working with the Starstream Oracle can heighten your intuitive skills to discover positive solutions and outcomes. The deluxe boxed set contains 52 gilded cards and a 114-page illustrated guidebook.

“My highest aspiration as an artist is the infusion of Spirit into matter.”
— Cheryl Yambrach Rose, 1989

Cheryl Yambrach Rose-Hall is a portrait painter, visionary artist and researcher. Using historical data along with her psychic impressions she creates empowered works of art based on sacred sites and their mythology.

Excelling in spiritual portraiture, Cheryl is collected by many discerning luminaries, including Gary Zukav, Neale Donald Walsch and Jean Houston. Her artwork has shown world-wide, including the Nelson Rockefeller Collection, the Rosicrucian Egyptian Museum and the Palace of Fine Arts in San Francisco.

Her work has been extensively published in a wide variety of forms — books, articles, magazines, CDs, Doreen Virtue's oracle decks — and has been featured on the Wisdom and Travel Channels. 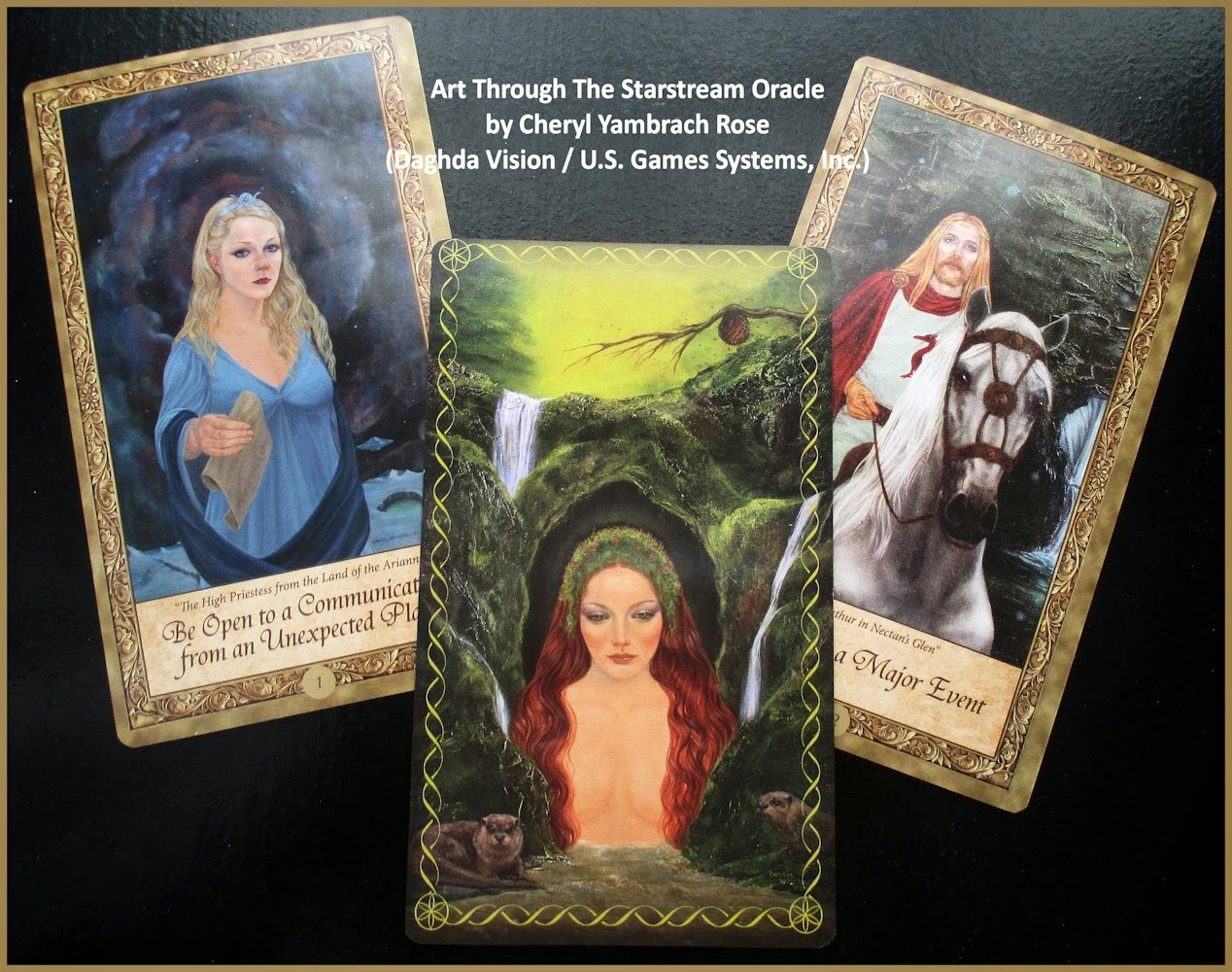 In Prague, she is co-founder with her husband, of Daghda Vision s.r.o., a company dedicated to global cultural exchange, art, film and publishing.

She divides her time between studios in Mount Shasta, CA, England, and Prague. Having returned to her European roots, she is excited by the reawakening of ancestral resonances, which she weaves through her fine oil compositions.

Toby R. Hall of Daghda Vision s.r.o. writes: “Through intuition, history, myth and personal experience, coupled with a finely tuned psychic compass she journeys into each of the mysteries embodied in the work and weaves them into this interactive Oracle.”

In addition to a truly stunning collection of paintings, the Art Through the Starstream Oracle includes a booklet containing information about a huge variety of mythological, spiritual, and mystical people and entities. Many of these are from the British Isles. 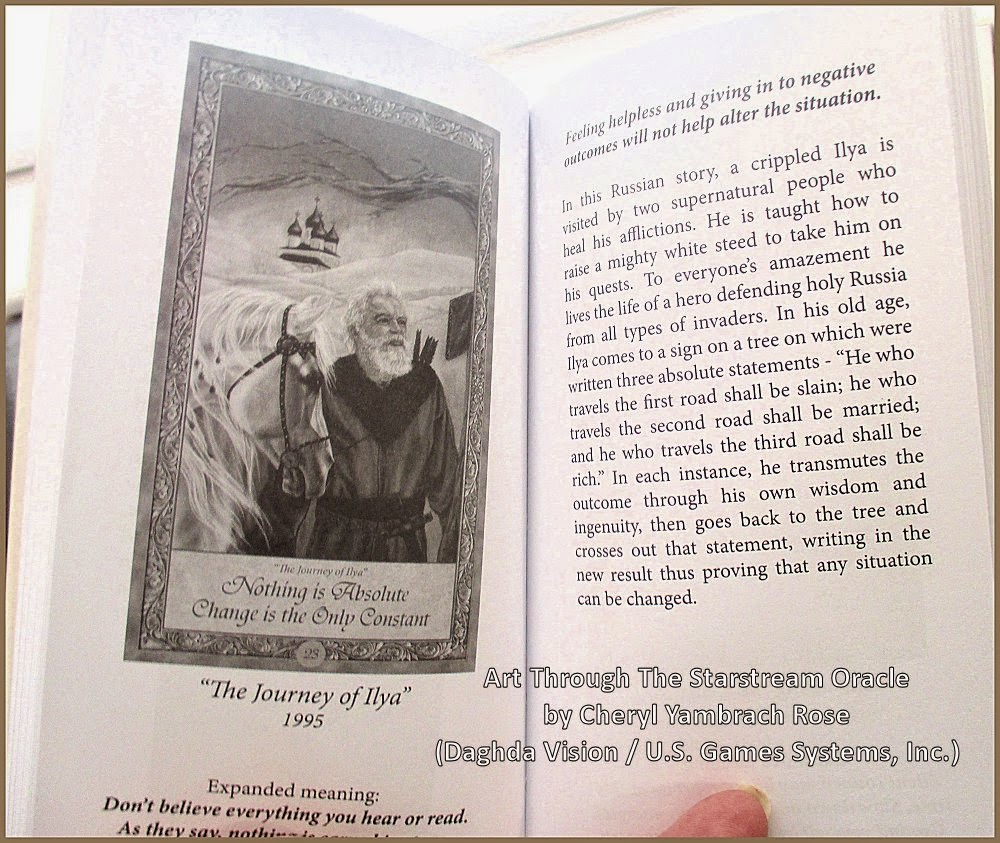 Each of the 52 cards in this oracle deck is designed to provide a message from a painting created by Cheryl Yambrach Rose. The publisher tells us that these images “are birthed from visions and experiences in both the inner and outer realms.” Combined with the text, they are intended to “serve as guides and stepping-stones” for our own research and reflection.

The 114-page guidebook has black and white images of each card, the card name, extended description and a story, plus a small photograph of a location or artifact related to the card. There are five spreads illustrated as well as instructions of how to use the deck. The spreads include a 13-card Starstream Portal Spread, a 4-card Prahna Spread, a 5-card Lemurian Dreaming Spread, a 5-card Through the Veils of Avalon Spread, and a 5-card Telos Spread. 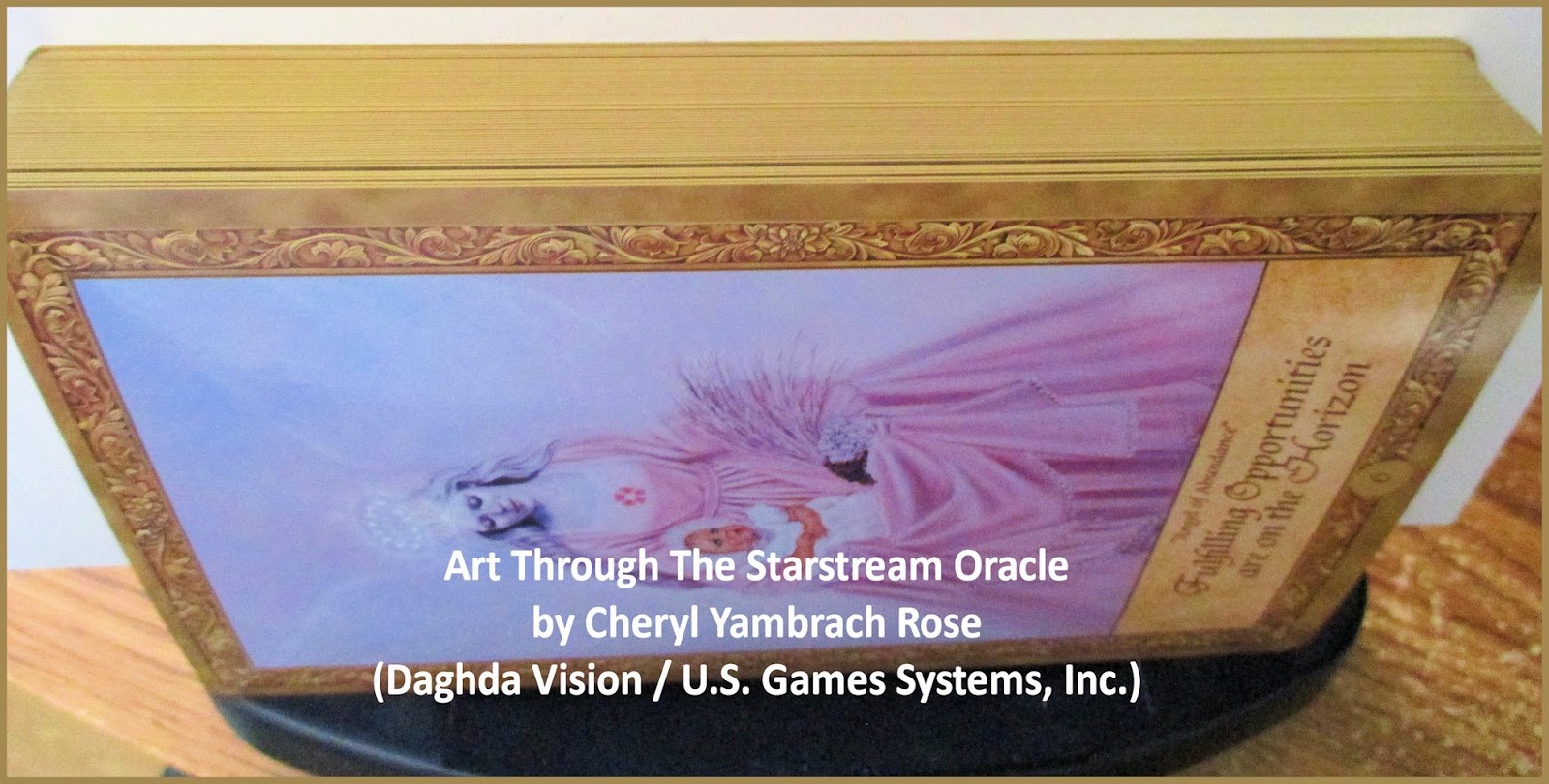 The set comes in a hard cover box with a lift-off top. The cover image for the box and the guidebook is that of “You are The Oracle”, from the “Avalon Starstream Oracle”.

Cards are made of sturdy card stock, with gilded edges. Card backs show a red-haired woman in a nature setting, with a stream and a forest animal that resembles a mink (correction: It's a river otter!) . Behind her we see waterfalls. Above her a branch with a hornet or wasp nest (correction: It's bees!) extends into the center-top of the card. Colors on the back of the card are earth toned – gray, brown, and green. There is a ribbony gold border surrounding the image. The backs are not reversible. 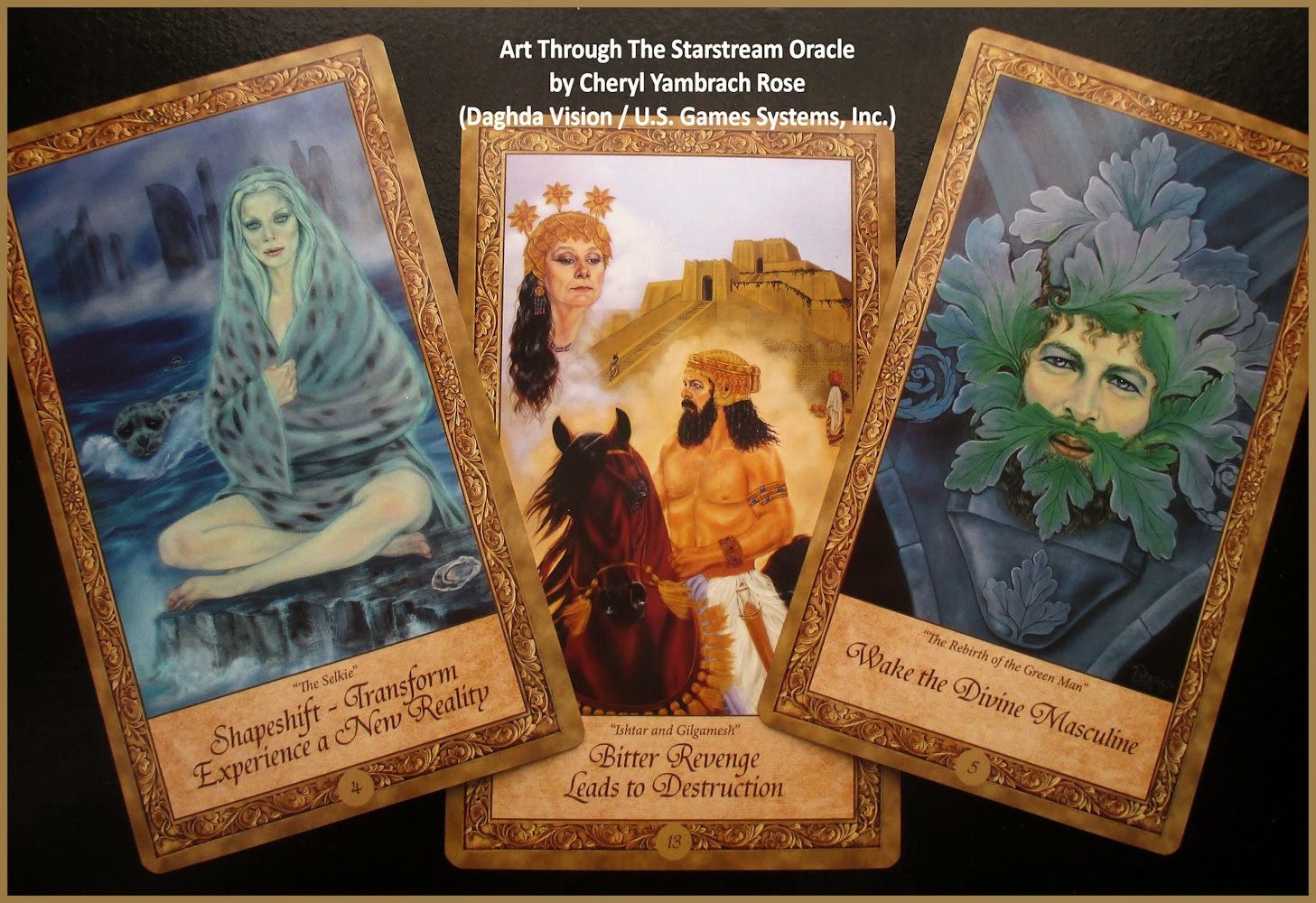 The card faces show a gold border framing a central image. For the most part, the deck is done in darker colors, with each card having a dominant color or color scheme. Card titles, key thoughts, and card numbers appear at the bottom.

Cheryl Yambrach Rose tells us: “My work is done in oil on linen, but not in the traditional manner. I begin each painting with the eyes and spiral out from that focal point. . . Beginning with the eyes gives me a direct portal and connection to the person or entity I am painting.”