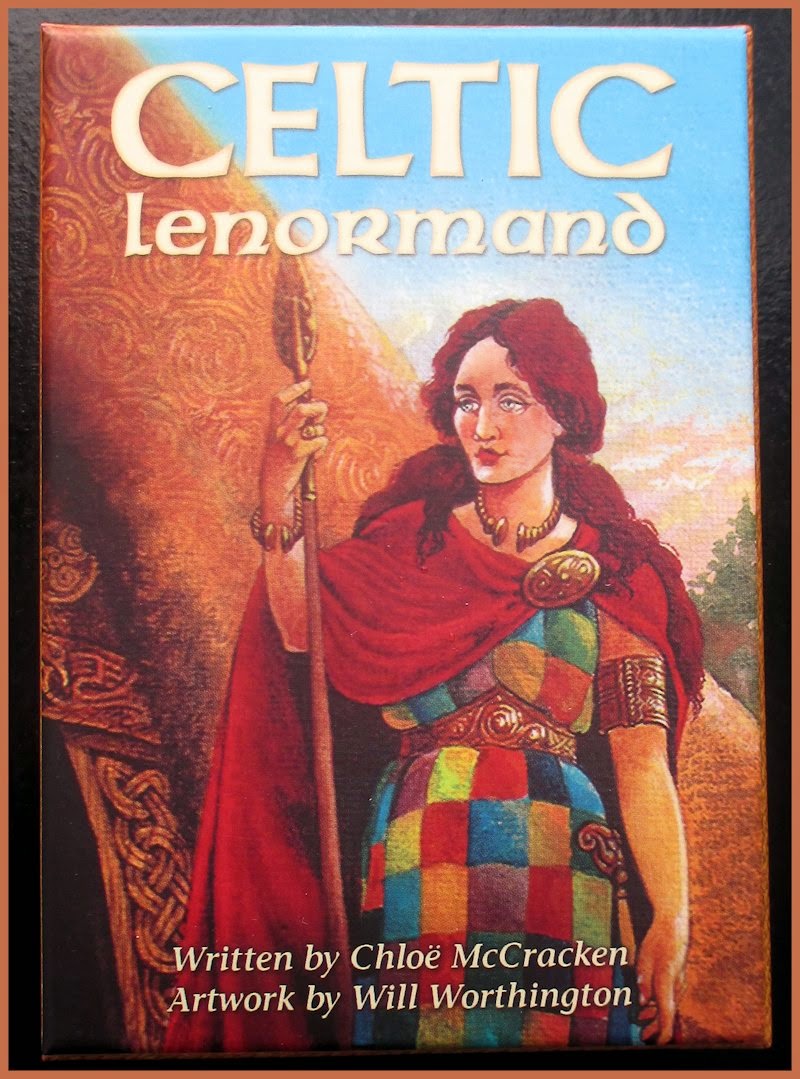 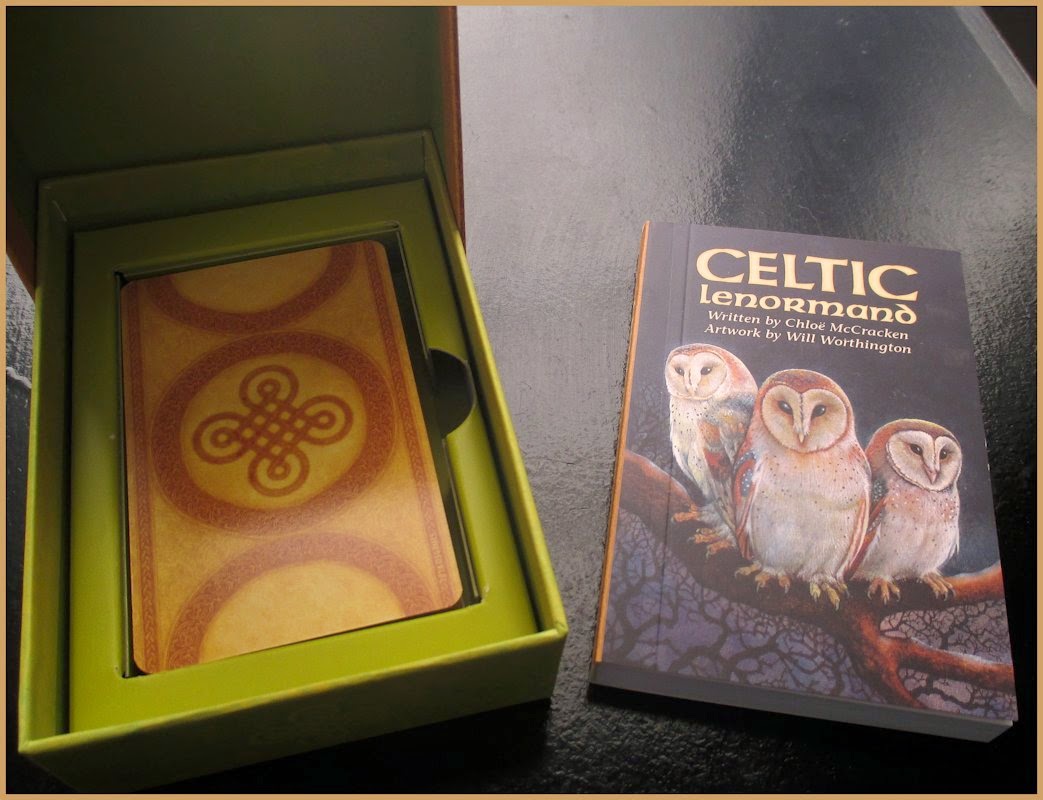 As a follower of Chloë McCracken’s blog _Inner Whispers_, a fan of Will Worthington’s art, and a lover of all things Celtic, I was pretty sure I was going to like the Celtic Lenormand. As it turns out, I don’t just like it, I love it. The art is exquisite, as expected, and Chloë delivers much more in the accompanying book than I could have imagined. I am looking forward to trying some of the spreads provided in the book and sharing them here on Tarot Notes. 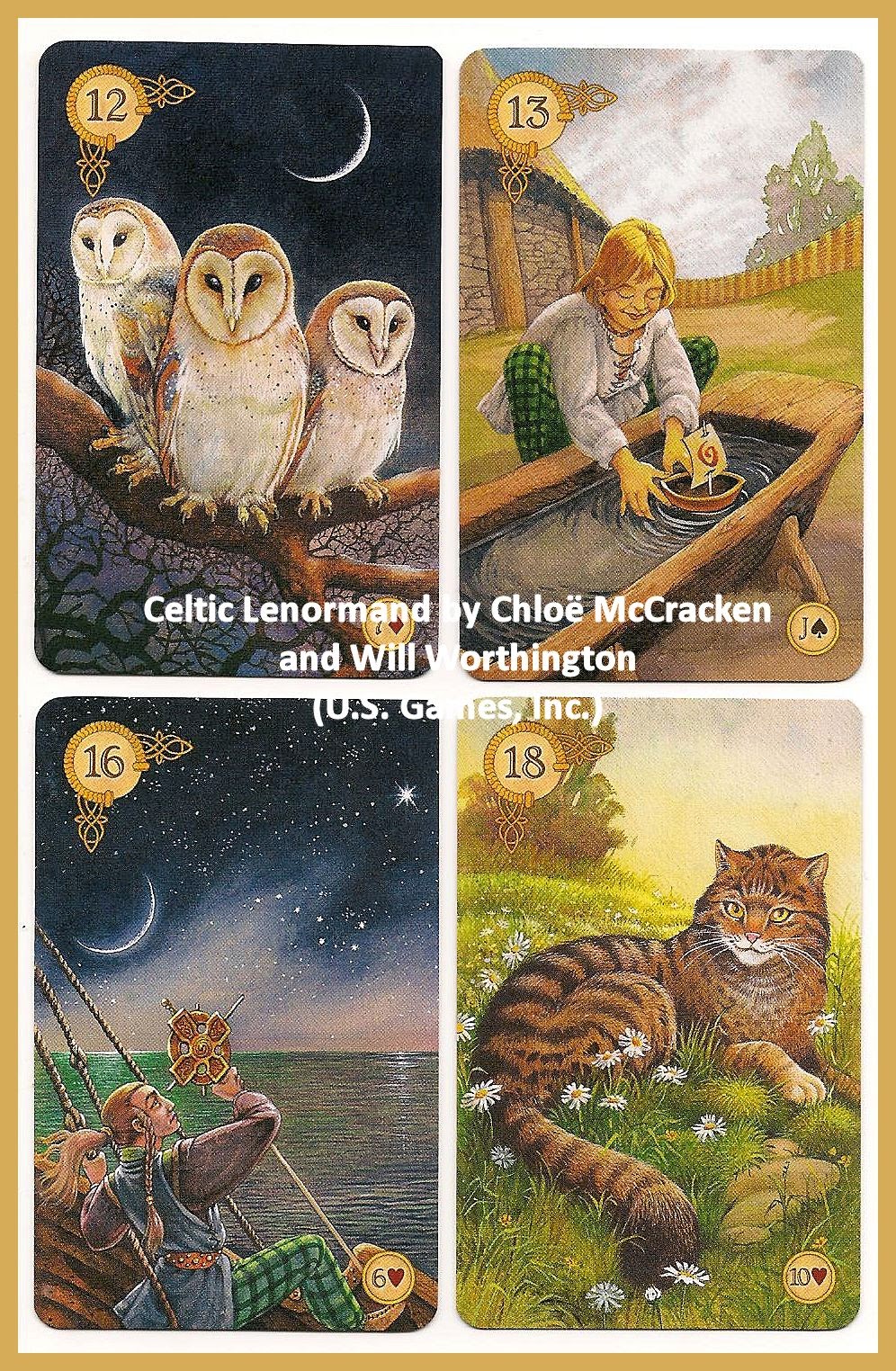 “Celtic Lenormand brings elements of nature-based paganism to the Lenormand divination system. This 45-card deck, with beautiful artwork by Will Worthington, provides additional tree, animal and people cards. In-depth descriptions for each card include spiritual messages, affirmations and suggestions for use in spells. The illustrated book also presents interpretations based on the phases of the moon and the Wheel of the Year.”

In the Celtic Lenormand, the images are Celtic versions of the traditional Lenormand deck images. In addition, symbolism shown in the images is designed to represent important aspects of the pagan path and perception of the world. The eight sabbats are represented, as are the phases of the moon. Specific cards are included for the god and goddess, as well as suggestions for deities appropriate to the other cards. The deck contains two tree cards for the God (the Oak and the Holly), three different Birds cards that reflect the three aspects of the Goddess (Maiden/Mother/Crone), an additional snake card that reflects the more positive aspects of the snake; a cat card (cats are traditional familiars); and four additional “people” cards. 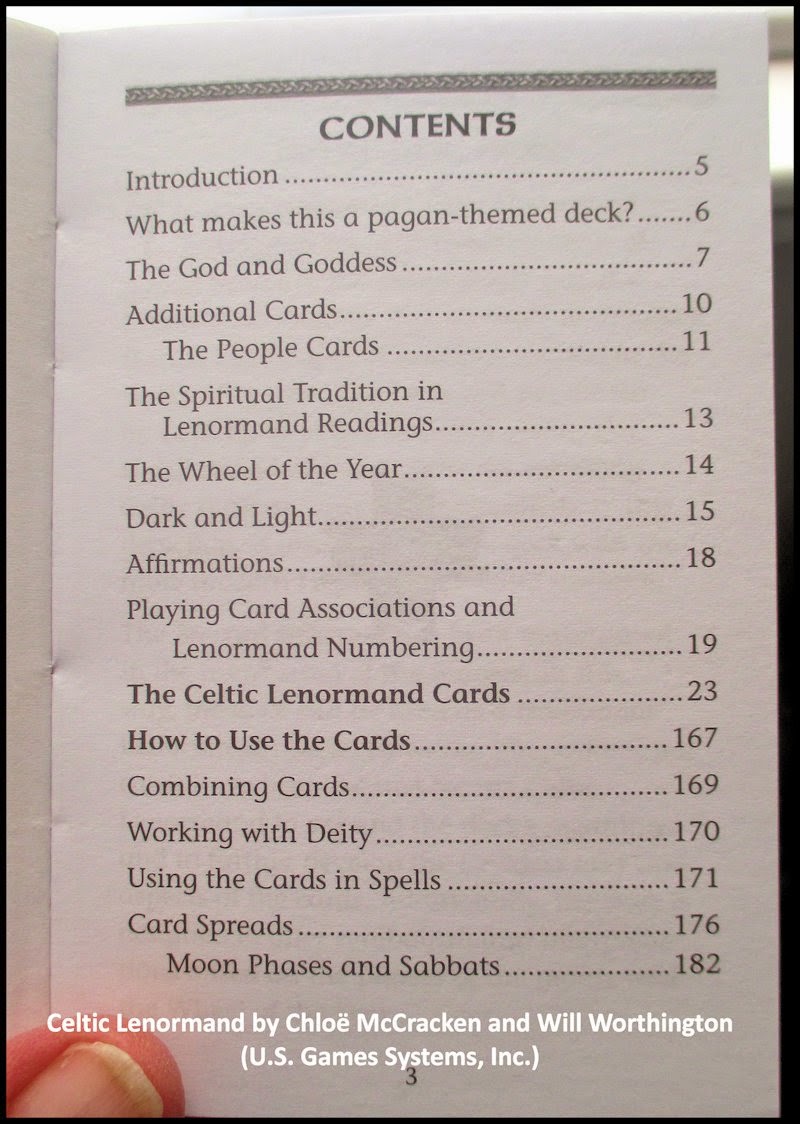 The 3 by 4-1/2 inch book that accompanies the Celtic Lenormand offers information about the structure and intentions of the deck, the spiritual tradition in Lenormand readings, The Wheel of the Year, Dark and Light, and Affirmations. For each card, the book presents the card number, card title, a small black and white scan, Keywords, Timing, Person, Playing Card Association, Description, Meanings, Spiritual Readings, Dark and Light, Spell Use, Affirmation, and Deity. A section at the back of the book provides information on combining cards, working with deity, using the cards in spells, and several card spreads, including a five card Lines spread, a five card Inner Cross spread, a nine card Mini Tableau, an eight or twelve card Paths spread, Dual and Triple Goddess spreads, a Moon Cycle spread, and a Year Ahead spread.

The deck and book are packaged in a sturdy cardboard box with a lift-off top. The inside has an inset for the cards. 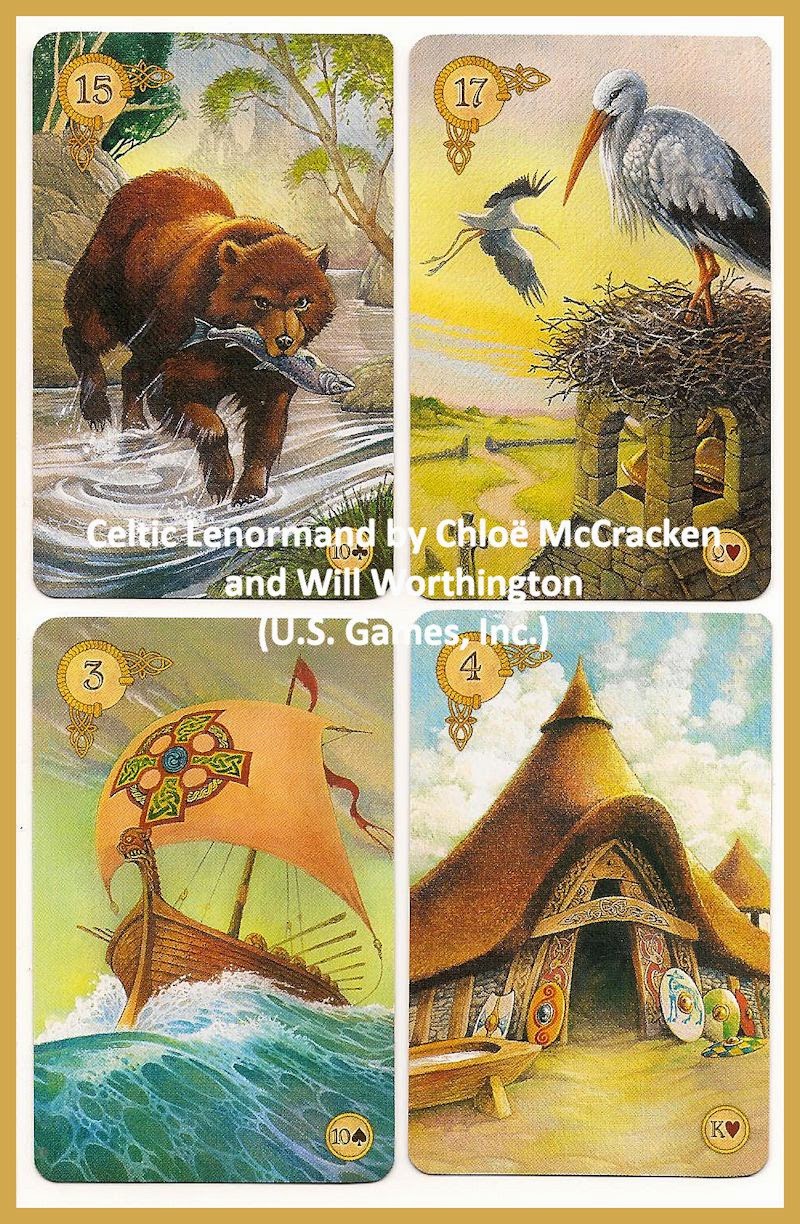 The cards are 2-1/4 by 3-1/2 inches and made of sturdy card stock. The backs are a medium yellow-gold, with a darker yellow-gold border on the two long sides. There is a dark yellow-gold circle in the middle. The result is a soft, glowing effect. Card backs are reversible.

The card faces are borderless. The card number, enclosed in a golden torc, is placed in the upper left hand corner. The playing card association appears in the lower right hand corner inside a solid gold circle. 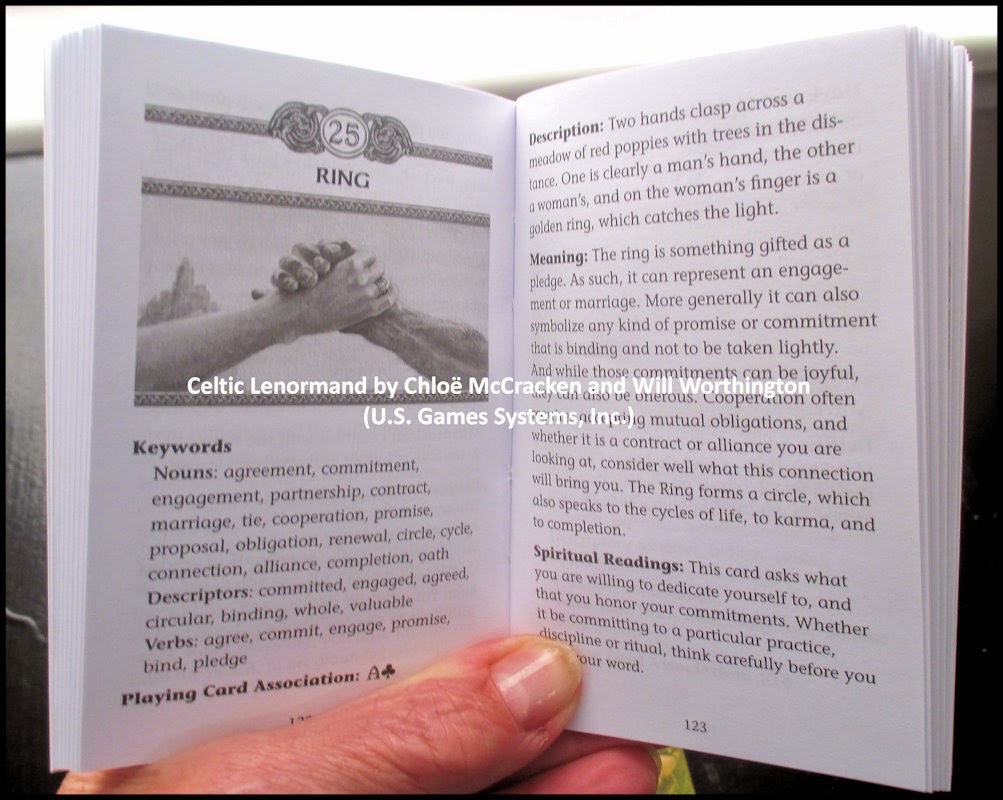 The backdrop for the cards in the Celtic Lenormand is the landscape of Brittany, in the north of France. Chloë McCracken explains that “this area was populated by Celts for over five hundred years, and is still considered one of the six surviving Celtic nations.”

The colors are intense, expressing a variety of tones or moods. The images are sharp, clear, and realistic. 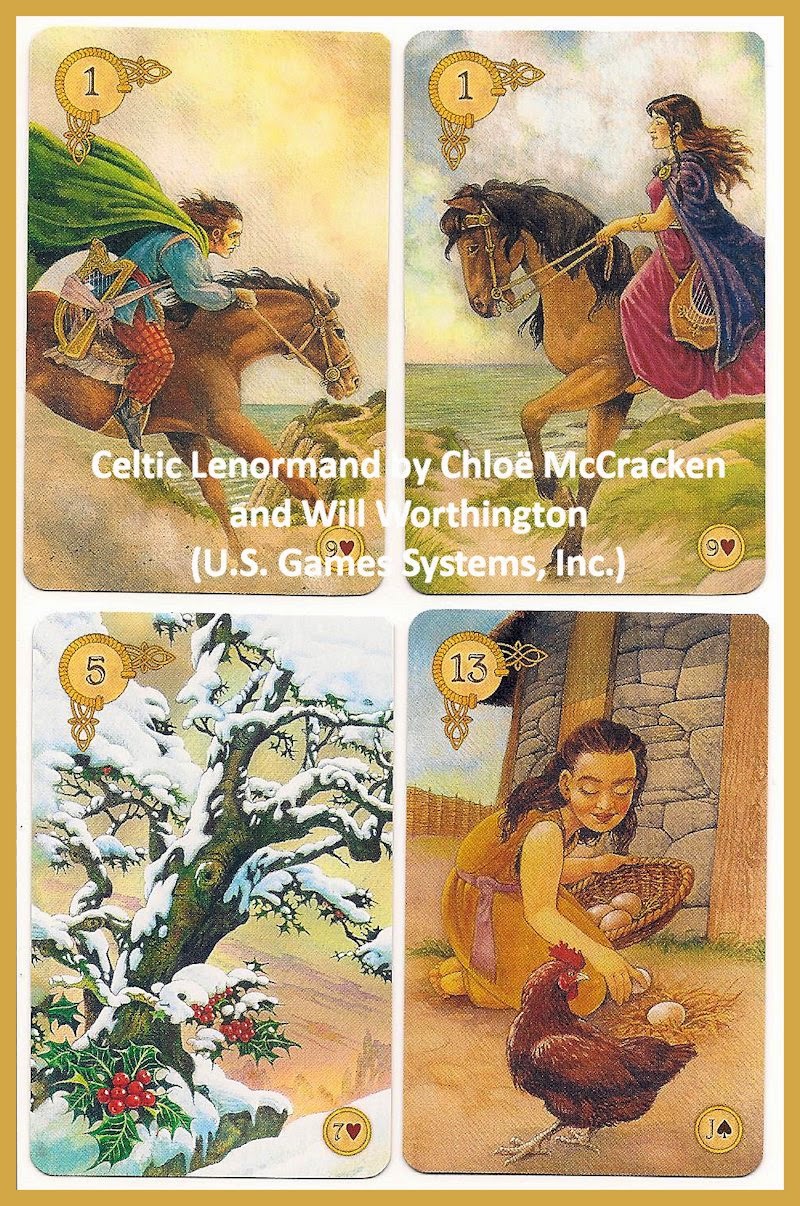