Let’s look at how THE HIEROPHANT is portrayed in these seven decks. 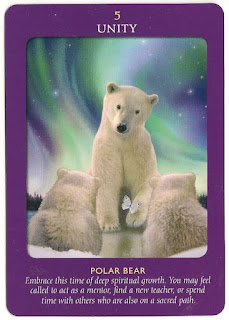 As someone who (childishly, perhaps) dislikes The Hierophant card in many decks, I am mollified somewhat by this use of the polar bear. Powerful, beautiful, and potentially deadly, polar bears rule the ice kingdom where they live, a kingdom of snow and freezing temperatures and – oh yes – the astonishing and breathtaking aurora borealis (“northern lights”). The tiny butterfly shown on the card hints at transformation and “eternal life,” while the polar bear facing us appears quite friendly and wise. I like the “Unity” title, which manages to expand the traditional “Christians-only” message of many Hierophant cards to include other spiritual paths. 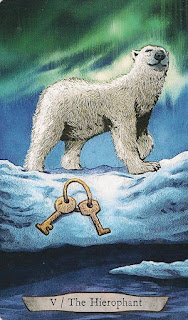 POLAR BEAR (“I have faith that I am being who I was always meant to be, doing what I was destined to do, in the right place, in the right time. And so too should you.”)

On this version of the Polar Bear/Hierophant, we see this majestic creature with a “northern lights” backdrop, along with two keys, said to symbolize a balance between the conscious and subconscious minds (the inner and outer worlds), the keys to heaven (Keys of the Kingdom), heaven and earth, and so forth. 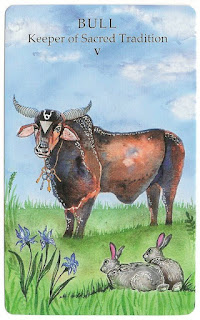 BULL / KEEPER OF SACRED TRADITION: “Honor the wisdom of experience.”

I like this choice for The Hierophant, which reflects its astrological association with the zodiac sign Taurus, the bull (according to the Order of the Golden Dawn system). Even though spirituality is above, beyond, or “outside” earthly matters, there is perhaps still a need to be grounded in some ways. In this deck, the Bull is seen to mediate between heaven and earth, serving as “oracle and guardian of temple entryways.” Here we see value in finding truth and inspiration through tradition and the guidance of elders, while avoiding the traps of rote patterns or fixed dogma. 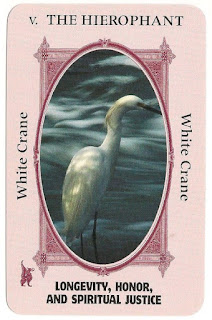 Ted Andrews points out that the crane, being a wading bird, “moves between water and the land, earth and sky. . . between worlds, between realms, between times…” What we have here is not just “longevity” but ancient knowledge and teaching that dates back to the beginnings of spiritual experience. 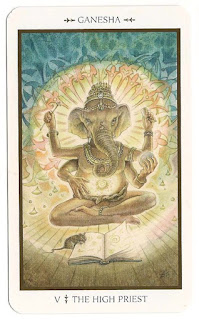 In the Hindu faith, Ganesha is the god of wisdom, knowledge, and the arts. He typically represents good fortune. His presence at the threshold of houses and sanctuaries is said to impede potential obstacles. 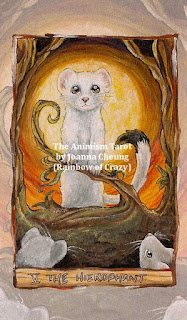 Although Cheung does not explain her choice of the stoat to represent The Hierophant, it is interesting to note that stoats – similar to weasels, ermines, minks, and ferrets – are known for their stealth, cunning, cleverness, and keen observation skills. I confess I am struggling to sync this up with traditional meanings for The Hierophant, but Cheung writes that the Stoat/Hierophant “is the link between realms, able to bring worlds together in harmony… the vessel of knowledge and the keeper of order and peace.” 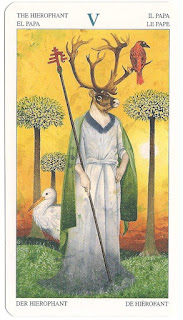 This deck does not explain the choices made for each card or other symbolism on the cards. Deer in general are well-known symbols of spirituality, regeneration, and creativity. The Penguin Dictionary of Symbols tells us: “The role of the reindeer is nocturnal and funerary and that of conductor of souls.” In the physical world, reindeer survive in a brutal environment, which speaks to their hardiness and strength.