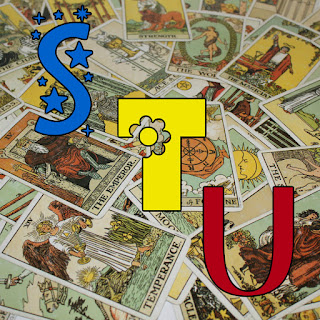 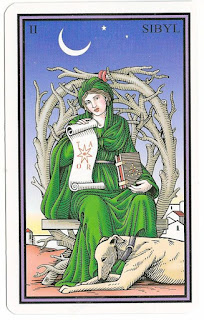 S is for SIBYL.

Well, why not? In Tarot of the Sevenfold Mystery, The High Priestess is portrayed as the ancient pagan prophetess Sybil. Her open scroll “displays the symbol for consciousness in the center of the seven-pointed star and the circular anagram relating the words TAROT, ROTA, and ATOR.” In this case, “S” can also stand for Symbolism,  and the number Seven: for the Seven Virtues of Temperance, Strength, Justice, Prudence, Faith, Hope, and Charity. 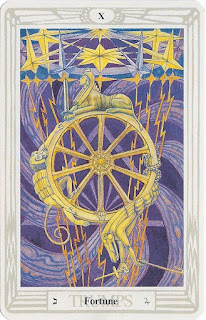 T is for TYPHON.

Typhon is the character descending the wheel in the Thoth Tarot representation of the Wheel of Fortune card. According to Greek mythology, Typhon was a Titan (another “T”!), a terrifying, huge monster who had nothing but serpents below the waist. When the card is reversed, Typhon ascends to the top of the wheel, a representation of dark times and bad luck. We might also say “T” is for TEN, as seen in the ten-spoked wheel on this card. “T” might also represent “TIME,” as the position of the wheel changes, and Typhon rises and falls, with time. 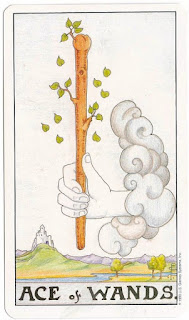 U is for UNDERTAKING.

The Ace of Wands is often seen as representing creation, a beginning, or the start of an undertaking. This card has appeared before in the ABC series, representing the letter P for “Potential.” This time we are using the Universal Waite Tarot. Synonyms for “undertaking” include enterprise, venture, project, campaign, scheme, plan, operation, endeavor, effort, task, assignment, charge, activity, pursuit, exploit, job, business, affair, procedure, proceeding, process, and transaction.

Does my partner of 15 years still love me?

QUESTION
“Does my partner of 15 years still love me?”

I don't want to disappoint you, but I cannot read your partner’s mind or tell you what they are feeling or thinking. What I can do is ask the cards for insight into the energy currently surrounding this relationship. Using Tarot of the Old Path, I drew three cards to represent the Situation, Challenge, and Opportunity. Below are the cards I drew into those positions and my interpretations. 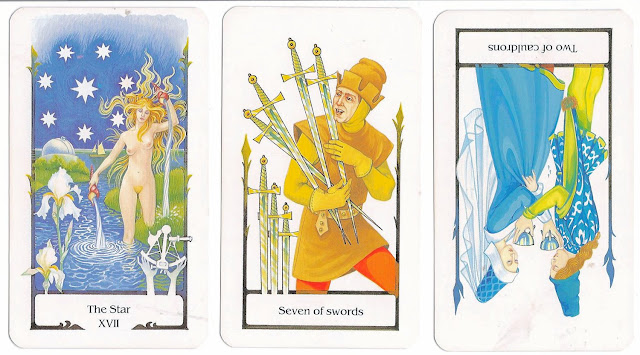 On this card, a woman pours nourishing ambrosia onto the land (conscious awareness) and into an estuary flowing forth to the sea (intuitive unconscious). In the foreground we see an iris, symbol of hope and power. This is a very encouraging card to draw in this position. It conveys a sense of harmony, balance, success, inspiration, satisfaction, and a bright future.

On this card, a man dressed in protective leather clothing and gloves clutches four swords and glances back over his shoulder with a grin. He appears to have stolen these weapons. As he darts quickly away, he leaves three swords standing in the background. The challenge that faces this relationship appears to involve someone not telling another person everything he or she needs to know. The "theft" shown on the card is in the area of the mind and communication. Concealed information is likely to cause conflict and insecurity.

On this card, a man and woman stand facing each other. They hold small cauldrons towards the other's lips in a gesture of love and union. Cauldrons is the suit of Water, representing emotions. Reversed, this card warns of separation, disillusion, and a troubled romance. However, in this position (Opportunity), I see this as an indication that you have an opportunity to avoid these things by heeding the messages of the other cards. Open communication and frankness is needed to restore emotional balance and allow all the positive potential indicated by The Star to shine forth.

My goal in providing this reading is to help you feel empowered to make practical, life-affirming decisions or changes. Always remember that your future lies in your hands.