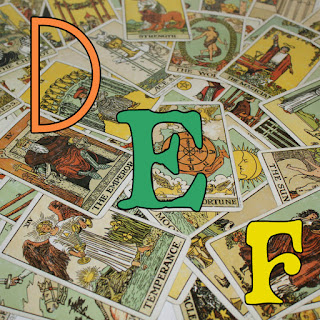 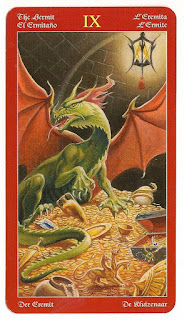 D is for DISCOVERY.

Whether THE HERMIT is a dragon keeping watch over a treasure or an old man with a lantern, the card is about discovery – seeking and finding, searching and uncovering, enlightenment and gaining knowledge you didn’t have before. The treasure is “that which the journey offers to the hero who undertakes an esoteric trip.” (Toraldo) 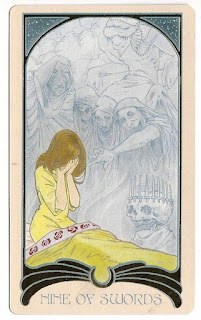 E is for EDGY.

The suit of Swords gives new meaning to the expression “to be on edge.” The NINE OF SWORDS is often about the kind of fear or anxiety that keeps us awake at night. Whether the crisis is real or imagined, our nervous system remains in fight or flight mode. 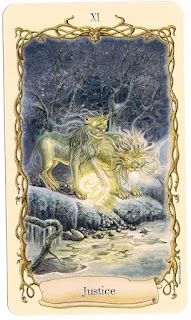 F is for FAIRNESS.

The association of “fairness” with JUSTICE was pretty much a no-brainer for me. On this version of the card, we have statues of ancient Chinese Lion-Dogs or Fu-Dogs, placed by temple doors as guardians. They protect the space they guard, hunting down and driving away evil spirits.