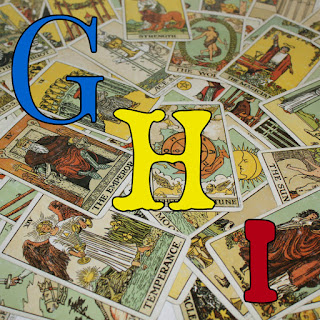 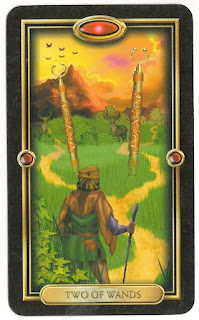 G is for GATEWAY.

In The Gilded Tarot, the Two of Wands shows a traveler facing a fork in the road. He is at a crossroads, and needs to make a choice or decision, even though it may not be clear to him which choice is the “correct” one. No matter which path he chooses, he is going to go through a (figurative) gateway beyond which lies the unknown.

H is for Heart. 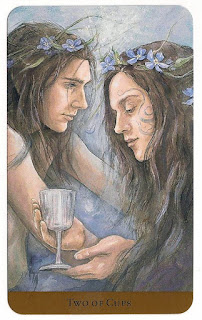 The suit of Cups is usually linked with the suit of Hearts, and both typically represent relationships, emotions, and the subconscious. The Two of Cups often indicates a heart-to-heart connection based on chemistry, magnetism, or recognition of “like meeting like.” This heartfelt connection can be romantic in nature but could also apply to a connection between a person and a group, idea, or project. With the number Two, we can be looking at opposites that are attracted to each other because each offers something the other lacks and needs or wants.

I is for IDENTITY.

I don’t have a deck whose name begins with I, so I did an internet search and found Ibis Tarot. You can see the cards from this deck HERE. I then went to one of hundreds of sites on line where you can randomly click and choose a Tarot card. The card that turned up was THE SUN. In astrology, the Sun represents our Self – hence my choice of the word “Identity.” The Sun card in Tarot is also often seen to be a representation of our personality and character. We are encouraged to be our authentic, shining Self.