This "reprint" from my "Journey Through My Tarot Decks" series seems like a good one for today, which is, of course, Valentine's Day. 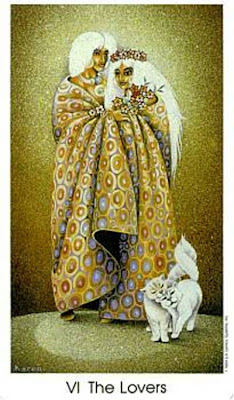 I love cats, and I was always drawn to this deck when I saw it in shops or on line. Even so, I didn't pick it up right away. To me, there was just something "creepy" about some of the images. However, over time, the deck convinced me that we really should be together.

Tarot of the Cat People is based on a fictional world called the Outer Regions, created by artist Karen Kuykendall (1928-1998). Renowned science-fiction writer Andre Norton wrote a two-part fantasy novel based on Kuykendall‛s world – Mark of the Cat / Year of the Rat -- which I highly recommend.

In Kuykendall‛s tarot deck, the five kingdoms of the Outer Regions correspond with the Major Arcana and the four suits of the Minor Arcana. Throughout the Outer Regions, cats are loved, honored and even obeyed (just like at my house!).

In Tarot of the Cat People the Major Arcana cards belong to Vapala (Va-PAH-la), The Diamond Kingdom. This is the kingdom of the Sky People. Associated colors are sparkling whites and pastels. Earth equivalents are the Grand Canyon, Arizona, and Kenya. The people of Vapala are "formal, proud, regal ceremonious, snobbish, reserved, subtle, conservative, conformist, class-conscious, austere." Prosperous, stable, and technologically advanced, The Diamond Kingdom produces the most renowned philosophers and scholars of the Outer Regions.

Kuykendall views the Major Arcana as "the synthesis of all the cards in the deck." On Trump Six, we see lovers "enveloped in a single, all-embracing drape, symbolic of a union and harmony that is both physical and mental. The drape is loose and carefree. . . It has a circle pattern, symbolic of eternity." (Kuykendall) At the feet of the human lovers, their companion cats "echo their feelings."

The DMs (divinatory meanings) provided by Kuykendall include "Love. Beauty. Perfection. Harmony. Confidence. Trust. Honor. Beginning of a possible romance. . . The necessity of testing or of subjecting to trial." Reversed, the card can suggest "Failure to meet the test. Unreliability. Separation. Frustration in love and marriage. Interference by others. Fickleness. Untrustworthiness. Unwise plans."

Today I'm revisiting a long-ago "Card of the Day" from The Sherlock Holmes Tarot by John Matthews and Wil Kinghan (Sterling Ethos).


I am a huge fan of the Sherlock Holmes stories by A. Conan Doyle, but in  this deck, The Hierophant is linked with The Seven-Per-Cent Solution, a novel written by American writer Nicholas Meyer in 1974. Published as a "lost manuscript" of the late Dr. John H. Watson, the novel focuses on Sherlock Holmes’ recovery from his addiction to cocaine. The title of the novel (and the card) is a reference to Holmes’ use of the drug in a seven-per-cent solution.

Keys for this card, upright, are: “revelation, inspiration, insight, tradition, preservation of heritage, initiation, advice or counsel, transformation of the mundane into the spiritual.” Reversed meanings: “rigidity, giving away too much, depending on institutional ways.”

The book that accompanies this deck also provides interpretations for each card under the headings “The Game” and “The Fog.” The former elaborates on the upright keys, while the latter expands on reversed meanings. An example from “The Game” for The Hierophant: “By transforming the mundane into the mystical, you suggest new ways to live.” An example from “The Fog”: “Be careful of seeming too self-important.”

In the book accompanying The Sherlock Holmes Tarot, the creators of the deck write: “While we in no way condone the use of such stimulants, the effect of the drug upon Holmes is a perfect metaphor for the opening of the consciousness to deeper and inner levels offered by the Hierophant.”

As the Card of the Day, The Hierophant may be alerting me to an opportunity to use my insights to inspire others, to transform the mundane into the mystical, or to mentor someone who is young or inexperienced. I am cautioned to be careful that I don’t attach too much importance to myself, that I avoid getting bogged down in rigid procedures, and that I refrain from projecting my ideas onto others. I need to find a way to preserve and honor tradition or heritage without being a slave to them.