One interesting way to use Tarot cards is to calculate which Major Arcana card represents a particular year. As you might guess, this involves adding the individual numbers of the year to arrive at a total that matches the number of a Major Arcana card.

To see versions of The Emperor from other decks,
along with astrological associations, click HERE.

As an American, my first thought upon seeing this card was that it represents Donald Trump and the authoritarian type of government he seems to want for this country (with him as “the authority,” of course). He wants to be “The Emperor.” And that influence in both a personal sense and larger sense is going to continue to affect, infect, and infuse not only American life but life around the world.

Another way to look at this card for 2020 is to think of it as representing a struggle for control, which we are certainly seeing not only here but elsewhere in the world. Who will be “The Emperor”? Who will be in charge? Who will rule? An individual? A select group of people? The masses?

To see versions of The Hierophant from other decks,
along with astrological associations, click HERE.

I typically see this card as representing organized religion and/or established entities, methods, and traditions. On one hand, as an American, I might see this as encouraging because it suggests that the “traditional” operation of government is going to prevail, in spite of efforts to create a government in which the Executive Branch has more power than any other.

At the same time, I can see The Hierophant as an indication that organized religion -- particularly the “conservative Christian right” – will continue to increase pressure and build power in order to try to bring society at large in line with their beliefs.

As for the number FIVE, I presented a detailed discussion HERE. 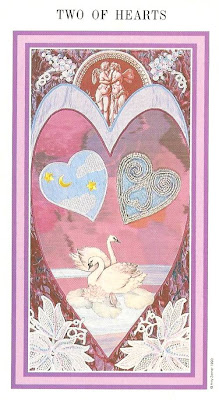 In this series of posts, I plan to discuss all of the Tarot cards in order, using a different deck for each card. In celebration of Valentine's Day, it seemed appropriate to explore the Two of Hearts (Cups) from The Enchanted Tarot by Amy Zerner and Monte Farber (published by St. Martin's Press).

I am fond of saying that all of the Hearts cards in this deck resemble Valentines, with their lace and bric-a-brac, pinks, purples, and reds.

The suit of Hearts corresponds to the element of Water, which Monte Farber tells us is associated with "emotions, moods, dreams, fantasy, romance, the season of Summer and the direction, West.

On the Two of Hearts we see two white swans circling in a calm stream among drifting water lilies. Swans, which are said to mate for life, often symbolize the power of love. In his Dictionary of Symbols (Duncan Baird Publishers), Jack Tresidder describes the swan as "a romantic and ambiguous symbol of light, death, transformation, poetry, beauty and melancholy passion." A swan can also represent the ebbing or loss of love.

At the top of the largest heart shape on the Two of Hearts, we see cupids and white flowers. A floating heart decorated with a moon and stars tells us that love is written in the stars. Another heart displays elegant, graceful curves that suggest joyful play and sociability. Monte Farber writes: "These two hearts beat as one."

A card of mutual affinity, union, and partnership, the Two of Hearts encourages us to cherish the loving relationships and partnerships in our life. The beautiful place depicted on the card is a place we create within us, where our thoughts, hopes, and memories of love abide forever.

February 2020 is here, and I think I'll do a little "cross promotion" with my handmade jewelry shop (Jewelry by Scotti on Etsy: www.jewelrybyscotti.com)

The birthstone for the month of February is amethyst, a violet or cool purple quartz gemstone that is said to promote humility, peace, and piety. Related to the third-eye chakra, amethyst is believed to strengthen intuition and help heal past hurts. 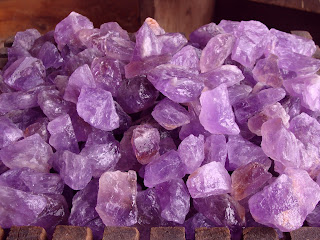 The word amethyst is from the Greek amethus(t)os, meaning "not intoxicated" and therefore it is considered to be a stone of temperance. Amethyst is also said to promote wholesome dreams.

For the Tarot of Gemstones and Crystals (AGM AGMuller), Helmut G. Hofmann chose amethyst for the Death card. In his words, "[Amethyst] brings light into problems and so helps us in the transformation from the mental to the spiritual level. It both soothes hardened souls and supports people with gentle natures." 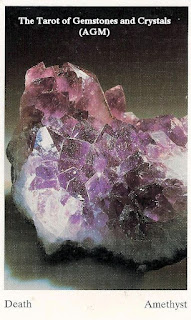 And now for the jewelry! The video below shows two pieces of amethyst jewelry. One is a multistrand coil bracelet with two sizes of faceted amethyst beads. In the same video you will also see a gorgeous pendant necklace that features not only amethyst and quartz gemstones but a beautiful purple carved tagua nut crescent moon.


For more information or to purchase, use the following links: