One of my current projects is rewriting the Lenormand class at The Magickal Circle School. In connection with that, I hope to do more Lenormand readings here at Tarot Notes.

Below is an example of a Lenormand 5-card line. The cards were drawn at random, letting the deck decide what the focus card would be. The deck was shuffled between card draws. I am using the French Cartomancy deck by Lo Scarabeo.

The question being asked is: What does Mary need to know about her next relationship?

Focus Card: DOG (18) - This card tells us that Mary needs to recognize how important friendship and loyalty are to her in a relationship. She needs and wants someone who is helpful, protective, and loyal to her.

Past: ANCHOR (35) and HEARTS (24) -  In the past, Mary wanted or had (or perhaps thought she had) a stable, safe relationship in which she and her partner were building a legacy together. From her perspective, this relationship was loving, romantic, and passionate. She was (or saw herself as) deeply emotionally involved, with her whole heart devoted to the relationship. (In the book The Secrets of the Lenormand Oracle, Sylvie Steinbach describes the Anchor/Hearts pair as "faithfulness, loyalty, unconditional love."

Future: COFFIN (8) and CHILD (13) - Looking towards the future, we see the strong possibility of important life alterations, a completion of a life cycle or period in Mary's life, the "end" of something. She may need to acknowledge that it's time to let go of the past and be hopeful. She may feel fragile and perhaps not certain she can handle a new relationship. Although she feels vulnerable, she may have to become more "like a child," to set fears aside, trust, and open herself up to emotional involvement. Another interpretation might be to look at the Coffin-Child pair as representing the end (death) of childlike innocence and naiveté. What Mary wanted or had (or thought she had) in the past, was simply not realistic and she needs to "bury" those unreasonable ideals in her next relationship. (Sylvie Steinbach describes this pair as "destructive youngster, depressed teen." It is possible that this is something she will have to deal with in her next relationship.)

Looking at the middle three cards (Heart, Dog, Coffin), we might suspect that a previous relationship ended because of a partner's actual physical death. In any case, looking only at those three cards, the lovely sentiments expressed by the Heart and Dog seem to come to a halt with the Coffin.

Now let’s look at how THE EMPRESS is portrayed in these seven decks.

ANGORA RABBIT (“Time to take action. Abundance and prosperity. Pregnancy. Creativity. Starting something new.”) We can understand the choice of a rabbit for this card when we read in the guidebook that The Empress, in contrast to The High Priestess, says, “Okay, that’s enough thinking! Time to hop to it!” Rapid movement and jumping in with both feet are actually not phrases I normally associate with The Empress card. She always seems somewhat sedentary to me and is often depicted as pregnant, sitting in a garden in the midst of Nature, looking benevolent. However, the association of rabbits with fertility and creativity cannot be overlooked. 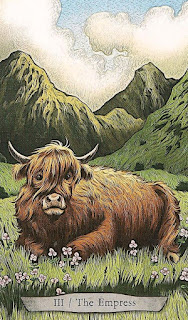 COW: The Cow is most certainly an iconic symbol of feminine energy, a creature whose milk nourishes not only her own children, but the children of many other species, human beings included. Here we have a lovely Scottish Highland Cow resting in open fields among the flowers, the mountains behind her. I like the way Leeza Robertson describes the energy of this card as “bountiful possibilities poised on the stage of expectancy.” The words “possibilities” and “expectancy” are keys to understanding the nature of The Empress card. This is not about a “finished product” but about that which is “on its way.” 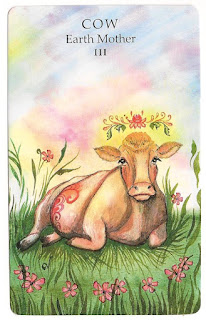 COW (Earth Mother): Instead of the Scottish Highland Cow, this time we have what I’m going to guess could be a _Jersey_. Keynotes for this card in this deck are “Nourishment, Protection, Goodness, Love.” This serene, gentle cow rests in a lush, grassy field surrounded by flowers. She represents creative growth and the need to nourish and support all of our creations. The author’s MESSAGE: “Trust life; share, nurture, and participate with delight.” 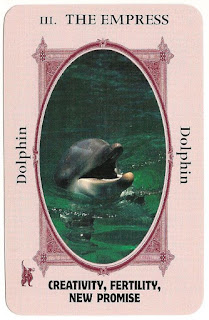 For Ted Andrews, the dolphin represents the energy of The Empress. He notes that dolphins embody three of the most ancient and powerful creative forces: water, sound, and breath. In Greek tradition, the dolphin was sacred to Aphrodite, goddess of love, passion, sensuality, and fertility. Known for its ability to communicate, the dolphin encourages us to ask what our words and thoughts are creating for us. 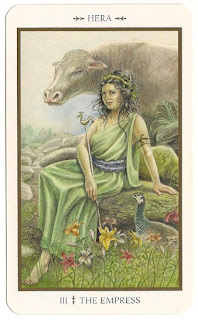 For this deck The Empress is represented by the Greek mother goddess Hera, who presided over women, marriage, and childbirth. Notably (considering the appearance of the Cow in two other Empress cards so far), Hera is accompanied by a cow – “a lunar animal, associated with the fertile powers of the earth.” Another animal included on this card is the peacock, sacred to Hera, symbolizing beauty and dignity. 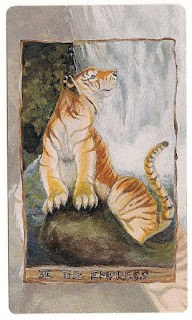 THE GOLDEN TIGER: “She is life: the ground that supports us, the fire that warms us, the trees that shade us, the food that nourishes us and the very air we breathe.” (Cheung) Representing passion, delight, beauty, patience, loyalty, and protection, a Golden Tiger was chosen for The Empress in this deck. Gentle with her young and ferocious with anyone or anything that tries to harm them, the tiger breaks the pattern set so far by the other animal decks, featuring a fierce predator rather than a more docile, benign creature. 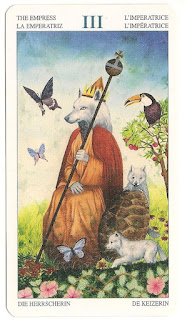 SHE-WOLF: Another top predator who, like the tiger, is known for showing great gentleness and protection to her offspring, while showing no mercy to her natural prey or to enemies that seek to harm the cubs. Keywords from the guidebook: “Mother. Intelligence, practicality.” Reversed: “lack of offspring, indecision.” This beautiful arctic wolf is shown in the company of not only two cubs but butterflies and a toucan. I checked (because that’s how I roll), and found that toucans are native to the Neotropics, from Southern Mexico, through Central America, into South America south to northern Argentina. Not many arctic wolves in those areas. But that’s part of the fun of this deck. These images are not meant to be illustrations in a natural history textbook.


The tally for animals portraying The High Priestess in these seven decks:

I have to say the cow is a very logical, meaningful choice for this card. I don’t deny that. But part of me loves the idea of a tiger or wolf as the Mother of All Mothers (so to speak). The dolphin and rabbit are also appealing choices. Which do you prefer?

Interview with the Ethereal Visions Illuminated Tarot Deck by Matt Hughes. I am the proud owner of deck #852 in a limited edition run of 1100. To learn more about this gorgeous deck, click _HERE_.

Interview questions and answers below.

(1) What would you like me to understand about you?

NINE OF PENTACLES: I bring you rewards and feelings of accomplishment and success on your earthly journey, a richness of physical and material gifts along with an appreciation of your own values and sense of security.

(2) What would you like me to understand about myself?

FIVE OF CUPS: You need to stop thinking so much about what you have lost, where you have failed, and what “might have been.” Look up. Turn around. Seize the goblets that are waiting to be filled.

(3) What strengths and/or weaknesses do we have as a team?

THE HANGED MAN: Together we can end old ways and release the restrictions that are holding you back in life. First, there is a need to reflection and “inaction,” contemplation that can help develop a new perspective, a different way of looking at things. Sacrifice may be needed, but the results will be worth it.