Music and the Tarot: The Mary-El Tarot

This is the first in what I hope will be a series of posts offering a literal interpretation of the blog title: Tarot Notes.

In his book The Tarot, Paul Foster Case assigns a musical note to each of the Major Arcana cards. I have been fascinated by this for a long time, but only just now decided to make something of it!

My background in music is quite basic: I learned to play the piano in elementary school and taught myself to play the guitar in high school. In the 1960s, I wrote and performed my own songs in coffee houses.

The other day I drew three Major Arcana cards from The Mary El Tarot by Marie White (Schiffer Publishing).  I composed a piece based on Paul Foster Case's associations, with one significant departure: Instead of assigning each card a note, I assigned each card a chord (based on the notes provided by Case).

Here are the cards I drew and the chords I assigned to them, based on Case. 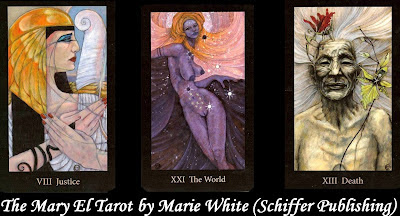 My purpose was to create something that seemed to reflect or express the "mood" or "nature" of the Mary El deck in general and these three cards in particular. The video also includes a blank verse poem I wrote that was inspired by these cards from this deck.


Within the Hall of Two Truths
Ma'at weighs the heart of the dead:
Heavy or light?
The part of our heart
that belongs to the World
is heavy
The part that is in the World
but not of it
is light.
A cycle ends.
Marta the Crone liberates our souls
And we are reborn.
I composed the music using a web site called Jam Studio. I don't consider my composition to be a public-performance-worthy piece by any means. I just hope you enjoy it.

To read my review of The Mary El Tarot, click HERE.