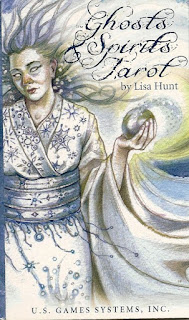 I am a big fan of Lisa Hunt's art and her Tarot decks. I love the theme of the deck and the choices that Lisa made for the cards. She clearly did an impressive amount of research and put considerable thought into the associations.

The illustrations for Ghosts and Spirits are, in many cases, creepy or disturbing. Some, however, are quite beautiful. My favorites include the Ace of Sword (Poltergeist), Temperance (Swan Maiden), and The Hermit (Dryads). 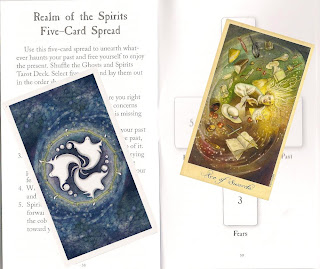 The most common question people have about a deck is: How does it read? That may seem like a simple question, but it really isn't. A deck that reads well for me may not read well for you. All I can do is describe my personal experience.

I will post a reading I did with this deck soon. I think I will want to use this deck for readings where I have time to study and meditate on how each card relates to the question or situation. I don't feel it would work as well for me in on-the-spot readings where the client expects an immediate interpretation.

"Ghosts and Spirits Tarot explores the fascinating subject of ghosts, surveying supernatural lore and legend from around the world. This luminous presents 79 ethereal beings, some frightening, and some friendly. Through the symbolism of tarot, they deliver their messages from beyond, shedding light on human experiences." 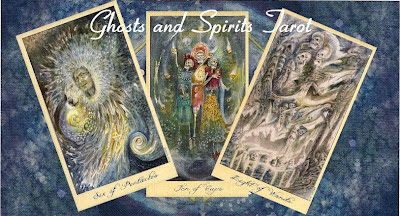 Lisa Hunt is an internationally known, award-winning tarot artist whose work includes Llewellyn's The Shapeshifter Tarot, Celtic Dragon Tarot, Animals Divine Tarot and Fairy Tale Tarot, as well as the Fantastical Creatures Tarot (U.S. Games). Lisa is also the author of the fully illustrated meditation book Celestial Goddesses (Llewellyn). Lisa loves to read and has an impressive collection of books. She has spent her life studying and sketching fairy tales, myths, legends and other fascinating subjects that have driven her muse. She also holds a M.A. in Interdisciplinary Studies with an emphasis on Jungian Psychology/Art & Drawing. 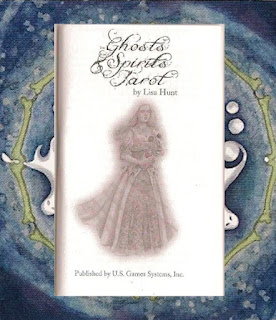 Ghosts and Spirits Tarot has the standard 22 Major Arcana cards and 56 Minor Arcana cards. Also included is a special bonus card "for questions that require deeper reflection." For each card, the Little White Book that accompanies the deck contains a brief synopsis about the ghost or spirit shown on the card, along with divinatory meaning and symbols. Lisa Hunt tells us in her Introduction to the LWB that the descriptions are based on research and her own particular input. Divinatory meanings do not include reversals.

In this deck we meet a wide variety of ghosts and spirits from all over the world. Some are familiar, some not. Examples include the Dragon Ghost-Gods of ancient Hawaii, the Ghost of Banquo (from Shakespeare's Macbeth), Eldorado (from the poem by Edgar Allen Poe), and the Cloud People/Shiwana of Pueblo Indian legend. 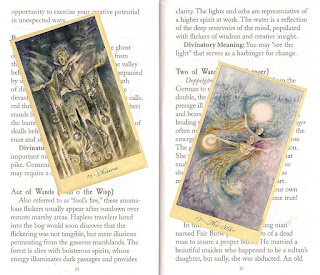 The 2.75" x 4.75" cards are printed on sturdy, glossy stock. They shuffle easily. The cards and LWB are housed in a flip top cardboard box.

On the card fronts the images are surrounded by a thin border the color of parchment. Card numbers and titles are at the bottom of each card in an attractive, old fashioned script that looks like it could have been written with a quill pen. This gives a feeling of times gone by or ancient mysteries, the perfect environment for ghosts. The backs of the cards are dark blue with a white border. In the center of the back, three ghosts float within a circle of what, to my eye, appear to be olive-green bones.

Lisa Hunt's art never disappoints. The colors she uses in this deck are mostly subdued, soft colors, with the exception of a few cards on which the colors are stronger or more vivid (for example, the 10 of Cups). The ghosts and spirits vary in form, some being skeletons and others having the appearance of fully fleshed human beings. They all have distinct personalities. Some are depicted with living human beings or animals in the scene. Each card contains much that is worthy of contemplation.

In accordance with the FTC Guidelines for blogging and endorsements, I hereby disclose that this product was provided by the publisher for free. Other than the occasional review copy, I receive no monetary or in-kind compensation for my reviews.  The substance of my reviews is not influenced by whether I do or do not receive a review copy.
on Thursday, June 21, 2012