Ramblings from Helen and The Sun

Today I am * egg-stra * pleased to welcome Helen Howell as a Guest Blogger! Join Helen as she rambles through Wonderland with Alice, Humpty Dumpty, and The Sun. 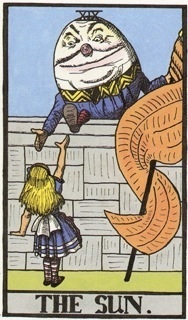 The Sun
by Emile M Tubiana
Let the sun rise high in the sky
Let's savor the honey from its supply
Let it cover us with its warm ray
To accomplish a productive day.

When I first looked at this image of the Sun, I wondered what Humpty Dumpty and Alice's connection to the usual meaning could be. After all, Humpty's an Egg, not Sun like at all, unless of course you soft boiled him and cracked him open to reveal that sunny yolk inside, but I don't think he'd like that, do you?

The Sun card is in most decks, depicted as a feel good card, something that relates to the poem above. It's considered the best card in the deck and in general means happiness and joy. It usually suggests energy, good health, optimism and a positive attitude towards life. Its more mundane meanings represent holidays, good news, birth of a baby, etc. In more traditional decks the Sun card is illustrated by a beaming sun radiating its warmth and energy outwards.

The Wonderland, with its depiction of Humpty Dumpty sitting on his wall and Alice about to shake his hand, does give you the impression that perhaps it's a cute and more frivolous deck than its more traditional counterparts. After all, how deep can an Egg be? Let's crack this card open. You'll see that what at first appears to be a superficial image does in fact touch upon the more psychological and self growth elements of this card.

Now indeed this card is about feeling good, but the Humpty Dumpty element does tend to border on the arrogant side. According to the LWB, the Egg is very pleased with himself, so much so, that he congratulates himself and allows Alice to shake his hand. He tells her that the King has promised to send all his horses and all his men, if he should fall from that high wall. Well, I've got news for you Humpty—you're scrambled egg if you do!

Humpty is so over-confident, that he has allowed his ego to place him in a position that could be a danger to himself, and maybe to others if they are standing under him when he topples – and topple he will - those with big egos fall the hardest, so they say.

Here in just that Humpty Dumpty symbolism, we have a positive and a negative aspect of the Sun card.

1: There is that sense of well-being, confidence in who he is and the simple enjoyment of his situation. (Positive aspect)

2: There is the arrogance, the element of showing off – confidence taken to the next step resulting in an inflated vision of himself. (Negative aspect)

Humpty offers his hand, not so much in friendship, but rather in acknowledgement of his own perceived achievement. So he thinks only he shines brightest, and in doing so, fails to see the light that others shine. This holds him back and stops him from reaching his real potential – it stunts his spiritual growth. I think Humpty teaches us a good lesson here, don't you?

Alice, on the other hand, is a different kettle of fish! She holds out her hand in true friendship. She, has a quiet confidence, one that doesn't need to prove to Humpty or anyone else, who she is. Alice is happy to be Alice. It is in this acceptance of the self that she is comfortable with who she is and what she knows, and can in turn allow others to be who they are.

This aspect of being comfortable with the self, so that one has no need to prove anything, which results in a flexible attitude towards others and life in general, is a fundamental part of the meaning of the Sun Card. When you experience the energy of the Sun, you can reach a clarity that enables you to gain an understanding about the self and others, that brings illumination, hope and optimism along with a renewed positive attitude.

This dear Wonderland's Sun card, shows us that we need to accept ourselves as we are and allow others to be who they are. It is this self confidence and understanding, that creates a positive future for us. It says it's okay to celebrate our success, but it also shows us that if we take self confidence too far, so that it turns into arrogance, we can make bad choices that delay our progress in self growth.

Humpty needs to remember that even if all the King's horses and all the King's men are called, they won't be able to put Humpty together again! Now that's no egg-zaggeration!

Lewis Carroll's Through the Looking-Glass (1872)

“I don't know what you mean by 'glory,'” said Alice
Humpty Dumpty smiled contemptuously. “Of course you don't—till I tell you. I mean there's a nice knock-down argument for you!”
“But 'glory' doesn't mean 'a nice knock-down argument',” Alice objected.
“When I use a word,” Humpty Dumpty said, in rather a scornful tone, “it means just what I choose it to mean—neither more nor less.”