The Old English Tarot’s 4 of Swords has a little more energy to it than the traditional image of the Rider Waite. The Rider Waite shows us a statue of a knight lying still on a stone tomb within a church, three swords hang over his head while a fourth is sideways along the coffin. It’s message is a clear one of rest. But the Old English image is different in that it does indicate rest, but not necessarily inactivity as the Rider Waite one does.

Let’s take a closer look at this card. 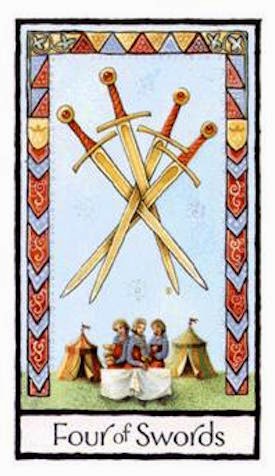 The image: We have four swords interlocked above the figures in this card. To each side of them is a colourful tent. Three knights sit at a table, holding what I assume is a wine goblet. They may be resting but they are definitely not sleeping!

The image of the interlocked swords could indicate here for us, that sometimes one gets locked into a thought pattern that will not necessarily help solve the issue or problem we may have to solve. The different coloured tents could well signify opposite sides. Those knights represent different houses that joust against each other. So that in turn could also represent conflicting thoughts perhaps. This lends weight to the idea that the interlocking swords (this being the suit of thought, mental activity and logic) show that the thought pattern we have is not serving us well.

The three knights sitting together, drinking and chatting, may be a symbol of resolving those conflicting thoughts by bringing them out and opening up to new ideas. The Old English 4 Swords shows us that it is in a relaxed state that we often find resolutions or a new way forward.

The card, like its more traditional brother the Rider Waite, does indicate that one needs to take time out to contemplate the alternatives - the need to call a truce with our thoughts in order to get them into working order or we will find we become trapped in that thought pattern. Also both cards indicate that it is a time to recuperate in order to renew ourselves both physically and mentally. But the one difference I see between the Rider Waite and the Old English symbolism is that although resting, one does not need to be inactive, but rather actively seeking a resolution in a relaxed way as opposed to total withdrawal.