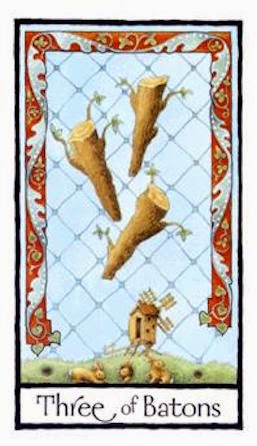 Now you may take a look at the Old English 3 of Batons and wonder what on earth does a windmill and rabbits mean? But if we take a closer look and compare it to a more traditional card like the Rider-Waite, then it all becomes clear.

In the Rider-Waite card we see a man gazing out across the water towards some hills/mountains (these could represent his goals). Two wands are firmly planted behind him (representing the actions already taken) and one wand he holds steady with his hand (the future action to be taken.) The card is about future action, making the next decision, realising that although the first stage has been completed there is still more to accomplish.

But this message is not so clear in the Old English and that is because its image is not so much about thinking about the next step, but rather showing more about being enterprising -- symbolised here for us by those rabbits who seem to be taking over the foreground. Also it’s about being productive, which is maybe what the windmill stands for -- you know the blades turn and the grain is ground type of thing. The green grass as a colour indicates balance, but also adaptability, potential and expansion, which is the key to the next step.

So although it may not be as obvious in its message as the Rider-Waite card, it still indicates that in order to grow and expand one needs to keep focused on what it is they want to achieve.

This is a number 3 card and in the tarot sequence it often shows us the first stage of completion. As this is a Batons card (Wands in traditional decks) it indicates how the creative energy is used in combining different elements to achieve an outcome.

So when you look at the Old English 3 of Batons, and you see that windmill’s blades turning and those rabbits multiplying, remember the message in its simplest form is keep at it!