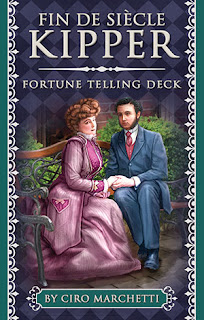 I dipped my toe in the Kipper pond awhile back with the Mystical Kipper deck by Regula Elizabeth Fiechter, with images painted by Urban Trösch (AGM Urania). Since I love Ciro Marchetti’s art, I was delighted when I heard that he was doing a Kipper. I enjoyed following along on Facebook as he shared the process, and I have no problem testifying that the end result is stunning! 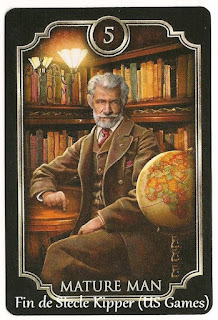 I love how the image on 5-Mature Man immediately reminded me of “The Most Interesting Man in the World” (Dos Equis commercials), and how, as I looked more closely, I saw that the man’s gaze is directed at the globe, his eyes seeming to express many different things at once. 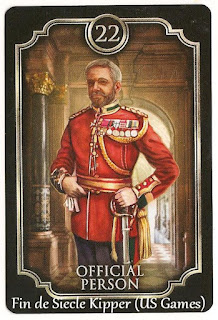 How intriguing that the man on 22-Official Person immediately reminded me of Tsar Nicholas II of Russia (1868-1918), even though he does not have the Tsar’s distinctive hair line. Number 37-Poverty makes me think of Oliver Twist, the main character in the novel of the same name by Charles Dickens (1812-1870), while 24-Thief brings to mind the Artful Dodger from that same book.

Marchetti tells us that he wanted to provide a “more realistic perspective” of the era instead of an idealization or “social propaganda.” The cards do indeed offer that realism, but they also evoke the charm of that more romantic perspective we have developed over time.

My favorite cards include 36-Distant Horizons, with that glorious wooden ship sailing over the clouds, its multi-colored sails billowing; 35-Pathway, with a setting that draws me in to the point where I can feel the ground beneath my feet; and 10-Journey (in my mind, I hurry to join the man standing by the train – surely one of those bags belongs to me!)

And it’s not just a bunch of beautiful cards. The guidebook is a true treasure, containing an impressive amount of information and insight -- historical, personal, and divinatory.

I completely agree with Fortune Buchholtz, who writes, “Overall, I see Ciro’s Kipper as a fun, complex 19th century novel. Like a Dickens work, it’s replete with adventure, travel and personalities, a work touched with nostalgia, romance, social life and a sense of drama.” With all that gorgeous art. Win!

“Ciro Marchetti has situated the traditional German fortune telling deck at the turn of the 19th century in Victorian England. In this expanded gilt deck with three additional cards, rich images tell the stories of the workers as well as the wealthy during the Industrial Revolution. Using augmented reality, via the Aurasma application, Ciro has brought the Fin de Siècle cards to life in stunning, new ways. Guidebook with interpretations by three expert contributors. Includes 39 cards.” 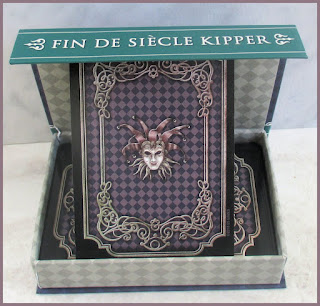 The Kipper cards (Kipperkarten) may seem like a “new idea” to many of us, but they have been known and loved in Germany for generations. It is believed they came into being around 1900, but their precise origin remains obscure. One hypothesis involves a woman named Susanne Kipper from Berlin. The second theory connects the cards with the Kipper (Wipper) people, who traveled across the country much like the gypsies.

The title of this particular Kipper deck is “Fin de Siècle,” which in French means “end of century.” The term can be used to refer to the end of any century, but is most commonly used in reference to the 19th century, also referred to as a Victorian/Edwardian setting.

Like the Lenormand, the Kipper deck has 36 numbered cards depicting scenes from 19th century daily life. Points of difference between the Lenormand and Kipper include the Kipper having what Fortune Buchholtz calls “profound human and interior cards not found in Lenormand.” The Kipper cards do not contain references to playing cards. 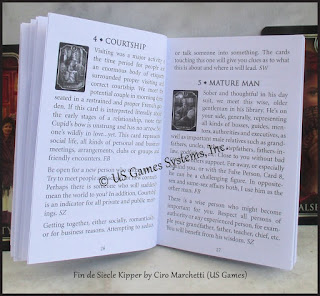 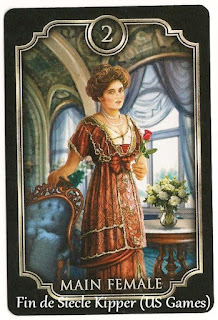 Following a lengthy and detailed Introduction by Marchetti, the Fin de Siècle Kipper guidebook offers commentary by Fortune Buchholtz and Stella Waldvogel. Descriptions of the cards are written by Buchholtz, Waldvogel, Susanne Zitzi, and Ciro Marchetti (the writer’s initials are indicated at the end of each interpretation, so readers know who is providing the information).

Each card description has several paragraphs of information, explanation of symbols, and possible interactions with other cards. A black-and-white thumbnail version of the card appears next to its entry. 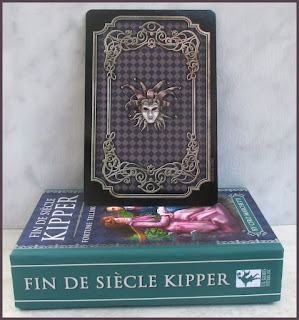 The cards are printed on high quality stock with a glossy laminate finish and silver-gilt edges. At 4-1/8 inches by 2-3/4 inches (my measurements), they fit nicely in my hands. I am able to poker-shuffle them, but I don’t recommend it with this deck. I want to keep these cards in their current, beautiful condition.

Card fronts feature a black background with a silver frame enclosing an image. The card numbers are silver and centered in a circle at the top. The titles, also silver, are centered at the bottom in capital letters. The nonreversible card backs have an ornate frame within a frame against a black background. Centered against a purple diamond-pattern is a jester’s mask (I have seen this diamond-pattern referred to as black and gray, but in my deck, it is most certainly a dark and light purple).

The sturdy, attractive box measures 4-1/2 inches by 3 inches and fastens with a magnetic closure on one side – top-notch quality. The cards and guidebook fit perfectly. 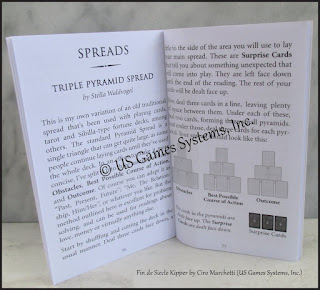 The 83-page guidebook (2-3/4 x 4 inches) is a high-quality version of the standard “little white book” often available with Tarot and Oracle cards, bound in a stiff cover that features the 4 - Courtship card in color.

Printing inside the booklet is black and white, with tiny greyscale images representing the cards. In addition to the card descriptions, the guidebook includes a Triple Pyramid Spread by Stella Waldvogel and Susanne’s SOS Spread by Susanne Zitzi.

An added bonus with this deck is the interactive system developed by Marchetti – a set of augmented reality videos referred to as “Auras,” created to work with a free application called Aurasma. Using this app, you can point your device’s camera at any card. The app will recognize the card and play the associated video, providing information about the meaning of the card. 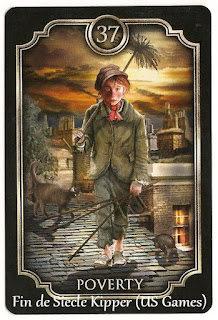 The Fin de Siècle Kipper presents Ciro Marchetti’s scenes from the Victorian/Edwardian time period in rich, glossy color. His goal was to incorporate “the good, the bad and the ugly aspects of human social interaction” in contrast to the original Kipper style, which depicted “cozy, domestic scenes” – “an idealization also projected in much of the art of that period.” The images are realistic and detailed, with that special glow we have come to expect from a Marchetti deck. People’s faces and eyes are expressive, and the colors and lighting speak volumes.