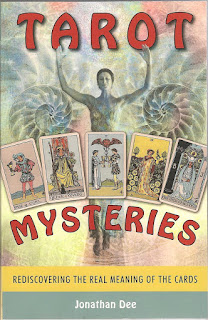 This is one of those books that makes for interesting reading and can also serve as a handy reference, especially for a reader like me who loves to use astrological associations with the cards. A reader who likes to use Qabalah and Tree of Life associations will also appreciate the tables provided in the book.

I think the book is best suited to people who have a basic foundation in Tarot, astrology, and Qabalah – or at least two of the three. Otherwise, the material could be overwhelming. 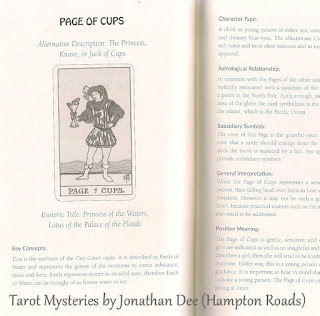 I especially like the Court Card descriptions, for which Jonathan Dee provides “Subsidiary Symbols” and a “General Interpretation” aimed at understanding a Court Card when it does NOT represent a person. The sections on “Symbolism” for each Major Arcana card contain a wealth of information, much of which I had not read before. The insights Dee provides for Minor Arcana astrological relationships are extremely useful.

Even if you are a Tarot reader who has no wish to use astrology or Qabalah, you still can gain from Dee’s historical information and card descriptions, as well as his thoughts on the positive, negative, upright, and reversed meanings for each card.

Stay tuned for a reading here on Tarot Notes using The Planetary Spread from this book.

This is a practical and accessible guide to one of the most popular divination systems. What makes this book different from the others is that it:

• Provides instruction on reading both the Major and Minor Arcana
• Explains why the cards are the cards, why each picture forms part of a sequence, and why they occupy a mystical place in our consciousness
• Gives a balanced and informative perspective on each of the cards, as well as an overview of the entire deck
• Provides a history of the tarot
• Connects the tarot to the Qabalah

This wide-ranging primer provides readers with everything they need to know about the tarot and provides fresh insights into the cards. 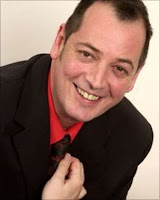 Born in Wales in 1957, Jonathan Dee became an astrologer, Tarot card reader, and psychic in the 1970s, working all over the UK and also the USA. His was a familiar name on radio, television, and in magazines. He was also known as an historian and folklorist.

Dee partnered with Sasha Fenton to produce an annual Astro-guides series between 1995 and 2002, in addition to coauthoring the Moon Sign Kit and The Star*Date*Oracle. Dee’s other works include illustrated guides to Tarot, Runes, Feng Shui, Color Therapy, Chinese Face Reading, Astrology, historical works on Ancient Egypt, and the history of Prophecies. Jonathan Dee passed away in 2010.

SOME OF MY FAVORITE QUOTES FROM THE BOOK


“The true origins of the Tarot remain a mystery, but it is a mystery with clues, these being found in the images of the cards themselves, and the occult themes that underlie them. Most notably, these are the signs and planets of astrology, and the complexities of the Holy Qabalah.”

“We should remember that the cards, like many other divination tools, will tend to focus on drama and large events that make an emotional impact. This drama may have already happened, be occurring now, or it may still be a way off in the future.” 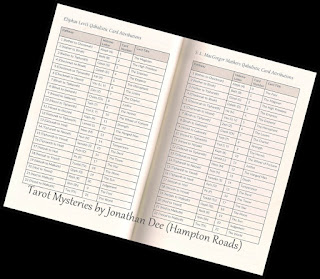 This book is published in paperback with a wonderful, creative cover showcasing several cards from the Rider-Waite-Smith Tarot arrayed in front of a High Priestess sort of woman with her arms upraised. On either side we see a nautilus shell, which can be seen as a symbol of growth and evolution. The book measures 8-1/2 by 5-1/2 inches and is about an inch thick (323 pages). The paper is a nice weight, cream colored printed with easy-to-read black type in a serif font.

Illustrations are black and white versions of cards from the Rider-Waite-Smith deck.

Part One – The Mystery of the Tarot Cards – covers five topics:

Dee then proceeds to give us “The Known Facts” about the true origin of the cards. This section is quite thorough and interesting. I am not a Tarot historian, so I will have to leave it to others to discuss the accuracy of this account.

We also learn about The Game of the Governance of the World (1459) and the game of Trionfi, which ranks the Trumps in five categories: The Earthly World, The Estates of Man, The Virtues, Hell, and Heaven. Gertrude Moakley’s way of presenting the cards, published in 1966, is fascinating, and not something I knew about before reading this book.

Part One continues with astrological associations for the Major Arcana cards, as devised by Levi, Mathers, Joseph Maxwell, Brian Innes, and the Golden Dawn (with a table incorporating both Hebrew/Qabalah and Astrology). 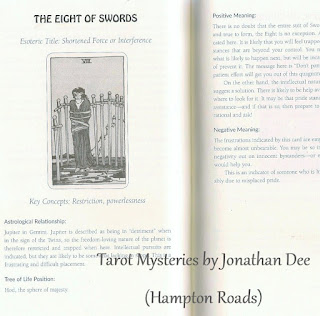 Finally, we have a long section detailing parallels between the Tarot suits and the four “Hallows” (sacred and magical objects in the legends of the Quest for the Holy Grail). This material may not be of great interest to everyone, but might be of special interest to anyone who uses The Arthurian Tarot by Caitlin and John Matthews (illustrated by Miranda Gray; Eddison-Sadd Editions).

From here, we move into Part Two: The Minor Arcana of the Tarot. Dee points out that the symbolism we have come to know and love for these cards is thanks to A.E. Waite and, most of all, Pamela Coleman-Smith, who produced the first set of fully illustrated cards. In this section of the book, we learn about the Golden Dawn’s astrological associations for the four suits, expanded to include the individual cards from Ace to King.

Those who wonder how specific associations for example, “Saturn in Leo” for the 5 of Wands) came into being will find Dee’s discussion informative and engaging. Much of the information is consolidated into table form, which again makes a great reference for the Tarot reader who likes to incorporate astrology into card meanings. Dee also offers a table outlining number symbolism in the Minor Arcana.

Next, beginning with the suit of Wands, Dee discusses the nature of each suit in general, followed by information on each card, including Esoteric Title, Key Concepts, Astrological Relationship, Tree of Life Position, Positive Meaning, and Negative Meaning. 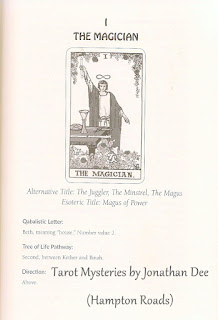 Last (but certainly not least!!!) we move into Part Three: The Major Arcana. Dee describes his interpretations of these cards as follows: “The interpretations in this book are as close to the early ideas a possible, but without harking so far back into history as to make their meanings difficult for a modern card reader to interpret or to explain to his Querent.”

For each Major, we are given its Number, Title, Alternative Title, Qabalistic Letter, Tree of Life Pathway, Direction, Astrological Correspondence, Description, Symbolism, Upright Meaning, and Reversed Meaning. (Dee notes that he only uses reversed cards “when one gets turned around by accident.”)

In Part Four – The Art of Reading the Tarot – we have sections on The Significator, Beginning the Reading, and Layout Out the Cards. Basic Tarot Spreads included in the book are The Horoscope Spread, The Planetary Spread, two Tree of Life spreads, and The Pyramid Spread. Dee follows these larger spreads with a few smaller ones: The Past, Present, and Future Spread (6 cards); When You Need a Quick Answer (4 cards); and The Pathways Spread (6 cards).