Death and Grief Reading for Helen and Mr. White

Today I am sharing a spread I adapted from one that was posted by Barbaras Ahajusts on Aeclectic Tarot Forum back in 2006. I am doing the reading for my dear friend Helen, whose cat Mr. White recently crossed the Rainbow Bridge. I had the pleasure of meeting Mr. White when I traveled to Helen’s home in Australia a couple of years ago.

Here is the layout, with positional definitions.

1. Mr. White
2. Helen
3. What united them?
4. Under which sign did their union stand?
5. What is now gone?
6. What remains for Helen as the gift of their union?
7. Which force is protecting and accompanying her during this period?
8. Which force accompanies Mr. White?
9. Which force helps Helen to let go and to keep going, gives her new courage, and benefits her? 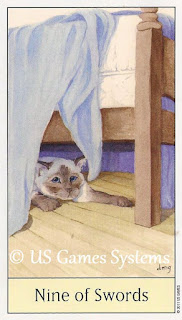 This card does seem to relate to Mr. White’s life for some time before he crossed the Rainbow Bridge, as he was in poor health and it had been decided that there was nothing else that could be done for him. We can’t know what he experienced for certain, but it is not hard to imagine a state of worry or anxiety might have accompanied his illness and approaching death. An animal knows when things are not right in his physical body. Cats are quite stoic. Their instinct is to maintain a strong appearance to keep a possible predator from seeing any weakness. We would not necessarily see any obvious indication of worry or anguish. 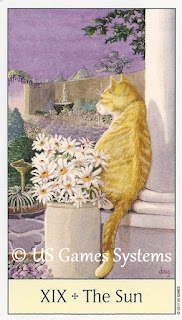 Even though she mourns the loss of Mr. White, Helen embraces and expresses the Sun’s positive qualities. She feels sorrow and loss, but is not devastated beyond repair. The core of her bright personality and warm nature are still strong. She knows that the sun will shine again even after the darkest, stormiest night. 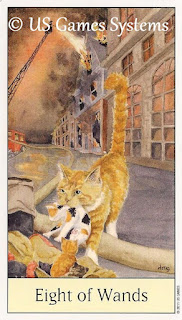 What we see in this card is not simply “quick action” but a mother cat saving her kittens from a fire. It is Helen’s nurturing, “mothering” quality towards Mr. White that united them, along with her desire and willingness to help him with his health issues as much as she could, for as long as she could. 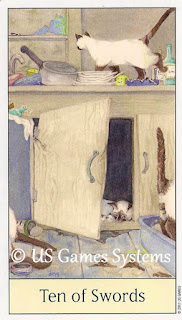 I wonder if perhaps this points to a situation or circumstances that Mr. White was in before coming to live with Helen? Perhaps he was a stray or neglected in some way. Another possibility is that the card refers to ways in which Helen lifted Mr. White out of a bad state or what would have been a hard life had she not been involved. 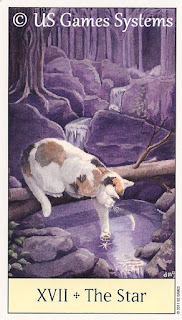 It is true that with Mr. White’s passing, we do see an end to hopes and wishes for his recovery. This would have been especially keen as his passing drew nearer and became unavoidable. It is also true that whatever inspiration or serenity that Mr. White brought to Helen while he was alive is now gone or, at the very least, changed to a different form. 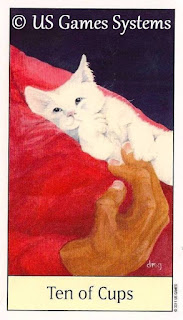 6. What remains for Helen as the gift of their union?

This is where we see that the loss of “The Star” is temporary, as Helen retains a beautiful gift of her union with Mr. White – fond memories of experiences and perhaps even an otherwordly connection that transcends physical existence. 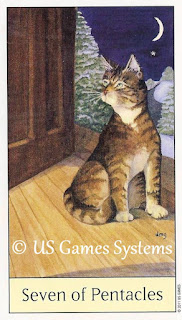 7. Which force is protecting and accompanying her during this period?

This card conveys a sense of security, stability, and well-being, the fact that Helen continues to live her life much as she did before Mr. White departed. She still has much in her life that brings her joy and contentment. 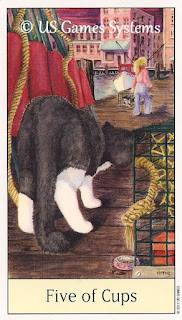 I think this is about the separation of Mr. White from Helen, a loss that they both felt (and still feel) keenly. We cannot know what Mr. White feels or experiences on the other side, but I don’t find it impossible to believe that there is a remnant of sorrow or regret that remains with the spirit of one who passes on. I have no trouble believing that Mr. White misses Helen, just as she misses him. 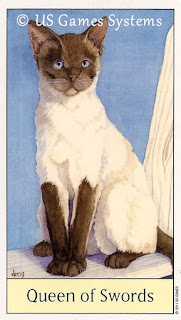 9. Which force helps Helen to let go and to keep going, gives her new courage, and benefits her?

Well, it is very interesting to me that the Queen of Swords is often interpreted as a woman who has experienced loss and grief but remains strong, allowing her experience to further strengthen her. If we pair this with The Sun (position 2, above), we get a picture of someone who can weather loss and disappointment and emerge with dignity and grace intact, and wisdom gained.

HELEN'S RESPONSE TO THE READING

Thank you for this reading Zanna, all the cards express my relationship with my lovely boy. The Ten of Swords is spot on, Mr. White was abandoned and not in a very good state when I took him in. Of his 16 years he has spent 10 of those with me. The pain of losing him is great as he spent a lot of time by my side, but I know that as your cards express, in time the pain will dull and the memories will make me smile again.
~ Helen