Sherlock Holmes Card of the Day: 5 of Deduction

The Sherlock Holmes Card of the Day is:
FIVE OF DEDUCTION
5 of Pentacles 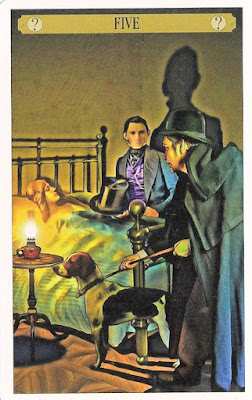 In The Sherlock Holmes Tarot by John Matthews and Wil Kinghan (Sterling Ethos), the suit of Deduction (represented by a question mark) is comparable to the suit of Pentacles. The quotation chosen to represent the entire suit of Deduction is from The Sign of Four: “So much is observation. The rest is deduction.”

The Holmesian Wisdom for this card is a quote from The Empty House: “Ah! …there we come into those realms of conjecture, where the most logical mind may be at fault.”

The Five of Deduction relates to The Adventure of the Missing Three-Quarter, in which Holmes is called in to discover the whereabouts of a star rugby player who was last seen leaving rapidly with a mysterious bearded man after sending a telegram to an unknown source. On the card we see Holmes and Pompey, a talented hound sometimes employed by the detective, as they discover the rugby player at the bedside of his deceased wife.

The association with the Five of Pentacles comes from the story’s tragic outcome, along with its connection to money and inheritance.

Examples from “The Game” for the 5 of Deduction: “things take a turn for the worse… feeling inadequate or impotent… a prevailing sense of misfortune or destitution.”

Examples from “The Fog”: “persisting through difficulties, you win out… blaming your misfortunes upon others… charitable support relieves the need for better resources.”