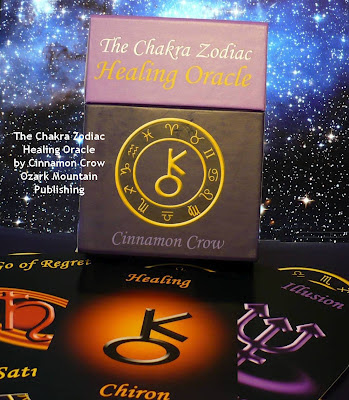 Working with this oracle will help harness the energy of the planets for all matters of healing—individual and communal, physical and metaphysical." 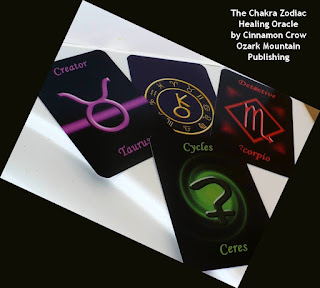 Author Cinnamon Crow is a psychic, medium, teacher, and healer, and is a certified Reiki Master Teacher (RMT). According to the publisher, her divination system (which combines the Zodiac and the Chakra systems) is the only one of its kind.

As an astrologer, the first thing I noticed about this deck is that Crow does not limit herself to the Tropical (Western) Zodiac (12 signs based on the seasons). She incorporates the Sidereal (Eastern) Zodiac (13 signs, including the 12 Western astrology signs plus Ophiuchus).

Those who use the Sidereal Zodiac typically believe that those born after 2009 may have a different sign than that assigned to them under the "old" system. Not only are the beginning and ending dates for each sign different in Sidereal astrology, but the Sun sign for those born between November 30 and December 17 is not Scorpio or Sagittarius, but Ophiuchus. Crow thoughtfully provides theTropical and Sidereal Zodiac dates in her booklet. My Sun sign is Sagittarius in both systems.

Following the discussion of the two zodiac systems, Crow gives us several spreads to use with this Oracle deck (or any deck, really). These spreads are: 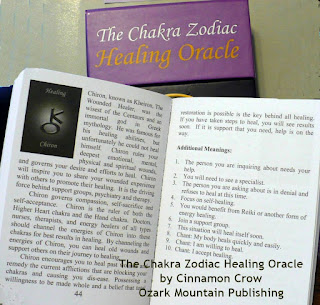 For each card, the booklet provides a black-and-white illustration of the card, several paragraphs describing the divinatory meanings, and a list of Additional Meanings, which include a Chant, or positive affirmation. The Index at the end of the booklet makes it easy to find each entry.

The cards cover 11 chakras, 10 planets and luminaries, 5 asteroids, 13 signs, and 4 elements.  There is also a card titled Resistance / Energy Block. Each card has a title (keyword or phrase) at the top, a symbol or symbols in the center, and the name of the sign, planet, asteroid, chakra, or element at the bottom. Crow tells us that you can use any of these cards as a focal point for meditation.

Chiron: Originally classified as an asteroid, Chiron (the Wounded Healer) is now considered by some to be an asteroid and by others, a comet. Some astrologers believe Chiron should be recognized as the ruler of the sign Virgo.

The Other Asteroids: Ceres, Pallas Athene, Juno and Vesta were counted as planets between 1808–1845, when the smaller asteroids began to be discovered. Originally classified as an asteroid, Chiron is now considered by some to be an asteroid and by other, a comet. Some astrologers believe Chiron should be recognized as the ruler of the sign Virgo.

This deck and booklet set is packaged in a very sturdy, very attractive cardboard box with a lid that lifts off easily (so don't turn the box upside down in the air!). Both the box and the backs of the cards feature a zodiac wheel with the signs around the wheel and the symbol for Chiron in the center. The cards measure 3-1/2 by 5 inches. They are not heavy card stock, but reasonably sturdy -- fairly typical for Tarot and Oracle decks. I have no trouble shuffling them. 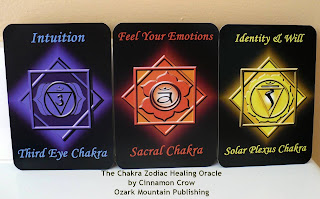 The elements cards have the traditional symbol for each element set against an appropriate background for that element. For example, the symbol for Water is pictured on a rippling pool of water.

The Resistance / Energy Block card has a diamond crossed by a square. In the middle is what I would call a rosette, with concentric circles in its center.

The Chakra cards also have the square-upon-diamond design in the middle. Several of them also include the rosette. Each Chakra card has a different symbol or symbols in the very center of the card.

All of the cards have a black background, with lettering and art in various colors.

The colors used on the Chakra cards correspond to the colors traditionally associated with each Chakra (for example, red for the Base or Root Chakra, orange for the Sacral Chakra, yellow for the Solar Plexus Chakra, etc.) The deck also includes cards for the Ear Chakra, Earthstar Chakra, Hand Chakra, and Higher Heart Chakra.

The cards representing the four elements have a color scheme that is different from what I expected: Fire is red and Water is blue -- that makes sense. But Earth is a deep blue or purple and Air is what I would call red-violet.

With the Zodiac signs, some of the colors are "obvious" choices (Aries-red, Gemini-blue, Virgo-green), but others are not what I usually see (for example, Scorpio - a Water sign - is red, perhaps because of the Mars rulership? and Taurus - an Earth sign - is purple). In similar fashion, the colors on the cards represents planets and asteroids are what I would in expect in some cases, but not in others. 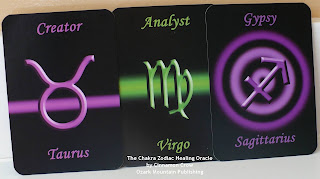 I had a feeling I was going to love this deck, and I was right.

Upon opening it, I immediately pulled the three cards representing my Sun sign, Moon sign, and Rising sign and was delighted to discover that they are purple and green (my two favorite colors!) I love the titles, too: Gypsy (Sagittarius sun), Creator (Taurus moon), and Analyst (Virgo rising). That's me in a nutshell, for sure!

The keywords used on each card are excellent, in my opinion. For example:

I have not worked with Chakras much at all, and this deck is the perfect way for me to delve into that a bit more.

The spreads contained in the booklet cover a lot of territory. I especially like the 4-card Problem and Solution spread, which I will try and share on this blog in the future.

I think people who are already familiar with astrology and chakras are going to have the most fun with this deck, but I can also see it as a learning tool for people who are studying these subjects. Crow's descriptions and meanings for each card are detailed and informative.

As a side note, I love the name "Cinnamon Crow." It reminds me of the character called "Cinnamon" on the old Mission: Impossible TV show. And the crow is one of my favorite creatures.

--------------------------
In accordance with the FTC Guidelines for blogging and endorsements, I hereby disclose that this product was provided by the publisher for free. Other than the occasional review copy, I receive no monetary or in-kind compensation for my reviews.  The substance of my reviews is not influenced by whether I do or do not receive a review copy.
on Wednesday, April 11, 2012