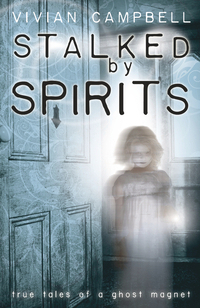 
"Shadowed by the supernatural since childhood, Vivian Campbell has encountered angry wraiths, mischievous child spirits, terrorizing demons, and all sorts of bizarre, unearthly beings. In Stalked by Spirits, Vivian relives these thrilling experiences."

To see a videotaped interview with Vivian Campbell, click HERE.

The 288-page book is a standard trade paperback measuring 5 x 8 inches, with text separated  into an Introduction, seven Chapters, and an Epilogue. The author is a paranormal investigator and sensitive whose life in several different haunted houses has been chronicled in several books and a television documentary.

The text of Stalked by Spirits is arranged in rough chronological order, one story after another, with flashbacks along the way. Each chapter is divided by subtitles. Chapter titles and many of the subtitles are provocative and encourage the reader to continue. Beneath each Chapter title Campbell provides a place and range of time covered by the chapter. Examples of Chapter titles: "Spook Central (Lookout Mountain, Tennessee: 1970-1979)," "Honeymoon with the Shadow Man (Atlanta, Georgia: 1991-1993)," and "Unexpected Guests (Orlando, Florida: 1993-1995)." Subtitles include teasers such as "The Cat with Nine Lives" and "Mr. Creepy" as well as those that simply identify the date that an incident took place.

I love a good ghost story -- whether it is fictional (like Stephen King's The Shining) or just might be true. For example, I thoroughly enjoyed the Weird & Haunted Tour I took a couple of years ago in Chicago (conducted by Weird Chicagogave her former stepson a pack of Tarot for his 18th birthday to help guide him as he began his adult life.

In accordance with the FTC Guidelines for blogging and endorsements, I hereby disclose that this product was provided by the publisher for free. Other than the occasional review copy, I receive no monetary or in-kind compensation for my reviews.  The substance of my reviews is not influenced by whether I do or do not receive a review copy.
on Tuesday, April 03, 2012