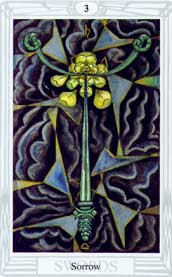 For Crowley and the Order of the Golden Dawn (OGD), the Three of Swords is linked with the placement of Saturn (lessons, limitations, karma) in Libra (a Cardinal Air sign known for being peaceable, artistic, and socially adept). Saturn is exalted in Libra, but there's precious little "exaltation" displayed in this card.

Crowley titles the card "Sorrow" and notes "but this is not any vulgar sorrow dependent upon any individual disappointment or discontent. It is Weltschmerz, the universal sorrow; it is the quality of melancholy." Food for thought. Crowley also writes: "This card is dark and heavy; it is, so to speak, the womb of Chaos."

Hajo Banzhaf and Brigitte Theler (in Keywords for the Crowley Tarot) describe the energy of the card as: "Blockage/end (Saturn) of peace and harmony (Libra)." 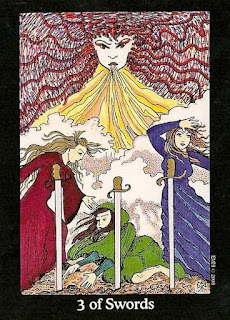 Liz Hazel's astrological associations for the Three of Swords align with those of Crowley and the OGD: Saturn/Libra. Hazel's DMs for this card include: "Conflicts and sorrows. Disappointment in others, a fear of loneliness or abandonment. . .Jumping to negative conclusions." Well-dignified, the Three of Swords may suggest "working in harmony with others." Ill-dignified: "News of a severe loss. . . Danger. Illness. . . Painful doubts. Blame and fault-finding."

Crystal Love associates the Three of Swords with the second subdivision of Gemini, along with its natural ruler, Mercury, and subruler, Mars. She writes: "Mars adds much aggression and force to the nervous and skittish Gemini, thus making for a quarrelsome and aggressive personality . . . Put to positive use, this energy makes for ambition and dedication in all areas governed by Gemini." 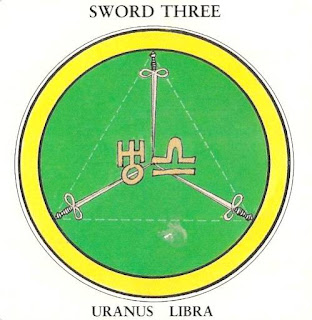 Mann's divinatory meanings for the Three of Swords: "A focus on creative interests of great originality lead to compromised relationships. Unexpected material success through contracts or legal action." Reversed: "Ignoring creative possibilities leads to dissatisfaction with routine and a desire to break away in rebellion." 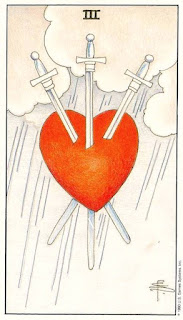 David Thornton's description of the energy of the Three of Swords is: "Unconventional or progressive views on relationships, crisis in a relationship due to resistance to change or to irritability."

In Anna Cook's TD system, Subject Card Three signifies Thinking and Networking. The key word for the suit of Swords in this system is Challenging, which gives us Challenging/Thinking, Networking for the Three of Swords. In astrology the Third House, ruled by Mercury, is commonly known as the House of Communication (among other things). Mercury is the planet of the mind and communication. See how nicely that works? The sign associated with the Third House is Gemini. However, Cook uses the second decan of Libra for the 3 of Swords.

Just when we think we are safe with an "Air" association for the Three of Swords, we read that Thierens associates the Three of Swords with "The element Earth on the Third house." He writes: "The element of Earth on the Third house acts in the way of the mind and mental processes, and must appear as 'troubles,' etc., because it gives the feeling of the mind being burdened, which might easily go as far as oppression. . . In general: affliction. Scheming, but not in a good sense."

(Note: If you are interested in learning more about this system put forth by Thierens, I recommend the book referenced above.)

All righty then! For the Three of Swords we have:
The common factor in all of these is the element Air, whether represented by Gemini or Libra. Planet-wise we have our choice of Saturn, Mercury, Mars, or Uranus.
It's easy to see why some Tarot readers throw up their hands and refuse to try to work with astrological associations. My advice is: If you want to use astrological associations, choose the system that makes the most sense to you and stick with it -- UNLESS the deck you are working with uses a different set of associations. Then, I feel, you really must consider using the system the creator of the deck describes. Otherwise, you could easily end up with conflicting or senseless interpretations that don't take into account the symbols and images on the cards.