Order of the Golden Dawn (OGD)
The attribution for The Emperor is Aries, the first sign of the zodiac, a cardinal Fire sign known for having strong leadership ability as well as for being impulsive, energetic, and quick-tempered. Aries is ruled by the planet Mars, planet of energy, force, sexual desire, and aggression.


One World Tarot by Crystal Love

The Emperor is associated with the zodiac sign Scorpio (a Water sign associated with sensuality, secretiveness, intense emotion, imagination, and psychic ability). Interestingly, Scorpio is traditionally ruled by the planet Mars, just like Aries (above). Crystal Love writes that The Emperor "represents hidden knowledge, the arcane, the profound and the mysteries."

A.E. Thierens, PhD. (Astrology & the Tarot)
The Emperor, Trump 4, is associated with the zodiac sign Cancer (Water), the fourth sign of the zodiac. Thierens writes that the people are ruled by the sign Cancer, and emperors traditionally got their power from the people: "This chosen dignitary was nothing of a tyrant, originally, nor did he have anything to do with rulership or warfare; he was simply the highest and most pure expression of the soul of the people or nation."

The Celestial Tarot by Brian Clark
The Emperor is linked to the zodiac sign Aries. Clark explains that Aries was not always the leading sign of the zodiac. He writes "When Hipparchus systematized the tropical zodiac in the 2nd Century B.C.E., he began the zodiacal year at the vernal equinox. . . The Vernal Equinox in the stars of Aries paralleled the gradual triumph of masculine values, which culminated during the Roman Empire." 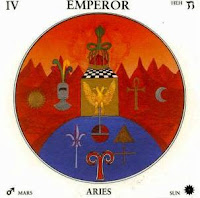 The Mandala Astrological Tarot by A.T. Mann
The Emperor is associated with the zodiac sign Aries, manifesting "self-assertion, authority, and power over the instincts."

The Whispering Tarot by Liz Hazel
This deck links The Emperor with Aries (ruled by Mars). Hazel points out that the Sun -- commonly representing the ego, individuality, the power of self, and the conscious will -- is exalted in Aries.


As we can see, while The Emperor is often associated with the sign Aries, this is not true for every Tarot deck. Both Thierens and Love offer a Watery attribution -- interesting, given that the elements Fire and Water are viewed as unfriendly, weakening, incompatible, and antagonistic toward each other. Note the dominance of the color red in most of these cards, representing the association with the element Fire and with Mars, whose nickname is "The Red Planet."