Journey through My Decks: 4 of Cups (by Zanna)

In this series of posts, I plan to discuss all of the Tarot cards in order, using a different deck for each card. Today I'm exploring the FOUR OF CUPS from the Tarot of Color by Leisa ReFalo, published by The Tarot Connection. 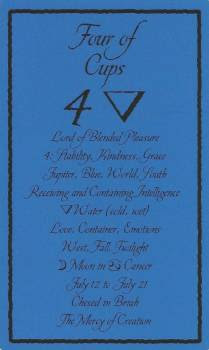 "Mere colour, unspoiled by meaning,
and unallied with definite form,
can speak to the soul
in a thousand different ways."
~ Oscar Wilde ~
The cards in the Tarot of Color are not "mere colour." They include written attributions and associations based on the Golden Dawn system. However, color is a key element of each card's interpretation.

The deck uses the King Scale of Color. On the web site devoted to Tarot of Color, Leisa ReFalo discusses each color in detail, including the Qabalistic World, Meanings, Christian Iconography, Alchemy, Chakra, and Tarot Cards with which the color is linked. In addition, she provides keywords that describe characteristics associated with "too much" and "too little" of the color.

I am hoping that you can read the words on the above image of the Four of Cups, to get an idea of how much information and what kind of information is given. The downward-pointing, equilateral triangle shown on the Four is the astrological symbol for Water, which reinforces the connection between the suit of Cups and that element.

The designation "Lord of Blended Pleasure" comes from Book T*, which offers the interpretation: "Success or pleasure approaching their end. A stationary period in happiness, which may, or may not, continue. . . It is too passive a symbol to represent perfectly complete happiness." ReFalo includes the keywords "Love, Container, Emotions" on the Four of Cups.

The number Four, as noted on the card, suggests "Stability, Kindness, Grace."

The Four of Cups represents the energy of the Moon in Cancer. In astrology, the Moon, which rules Cancer, represents our emotions, instincts, sensitivity, and the unconscious – the hidden part of the personality. Cancer is a cardinal Water sign known for being imaginative, emotional, sensitive, loyal, and with a tendency to be moody. People with the Moon in Cancer in their natal chart tend to exhibit some of the Moon's most positive qualities: devotion, patience, and sensitivity.

The Tree of Life association on the Four of Cups is Chesed (mercy) in Briah." Chesed‛s virtue is obedience; its vices are bigotry, hypocrisy, gluttony, and tyranny. Briah (one of four levels of reality described in Qabalah) is The Creative World, associated with the element Water. One way of expressing the meaning of Chesed in Briah is "The Mercy of Creation."

Other associations shown on the Four of Cups include the planet Jupiter (exalted in Cancer), the color Blue, "World" (this appears on many pip cards of various suits), the directions South and West, Fall, and Twilight.

As someone who uses several Golden Dawn-based decks, I use the Tarot of Color mostly as an adjunct to other decks in readings, where it provides a handy reference guide and opportunity for enrichment.

About the deck: Tarot of Color is an esoteric attribution deck. Its correspondences are based on those of the Golden Dawn system. The colors come from the King Scale. Tarot of Color can be used on its own for readings, as flash cards for learning the correspondences, or to clarify a reading from another deck.

-------------------------
*Book T - The Tarot, Comprising Manuscripts N, O, P, Q, R, and an Unlettered Theoricus Adeptus Minor Instruction. A Description of the Cards of the Tarot with their Attributions; Including a Method of Divination by Their Use. A public domain manuscript.