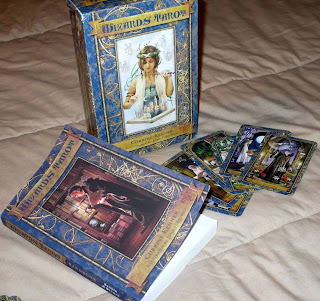 When I first heard that Llewellyn was publishing a deck called Wizards Tarot, I imagined that the cards would depict various types of wizards engaged in various wizardly activities. I thought that sounded okay, but not exciting. Now that I know what the deck is really about and have seen it, I'm excited!

Corrine Kenner (author of Tarot for Writers, Simple Fortunetelling with Tarot Cards, and numerous other books) begins the Introduction to Wizards Tarot as follows:


"Welcome to Mandrake Academy -- where you are the student, and tarot is the teacher. Sit down, unwrap the cards, and you'll discover a whole new world of magic and mystery." 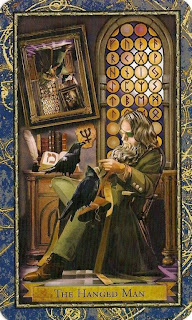 
"Step through the doors of Mandrake Academy . . . where you will don the robes of a magical apprentice and learn from your instructor—the tarot. Featuring gorgeous, intricately rendered digital artwork by John J. Blumen, this wonderfully unique tarot deck presents a full course in basic magic while teaching you the timeless art of reading the cards."

The deck follows the Rider Waite model, with 78 cards, 22 trumps, and four suits.

The Major Arcana cards are not numbered, and some of the names differ from those in the RWS deck (for example, The Fool has become The Initiate, Death is Transfiguration, Temperance is The Alchemist, and The Devil is The Dark Lord). The Strength card appears in the Wizards Tarot Handbook as the 8th Trump and Justice is the 11th Trump. 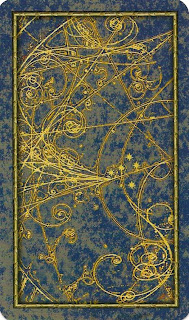 The cards are a nice size for shuffling: 4-1/2 inches by 2-3/4 inches. The stock is a bit thinner than I would like but not atypical of Tarot decks. The finish is glossy. The backs of the cards contain gold scrolls and streaks forming intricate patterns against a dark blue and gray background. A matching 1/8-inch border appears on the faces of the cards. In my opinion, the borders are not so wide as to detract or distract from the images. Card titles appear in black against a narrow gold banner at the bottom of each card.

The 264-page Wizards Tarot Handbook (paperback) is a treasury of information and inspiration. Kenner's writing style is clear and concise, easy to read and understand. 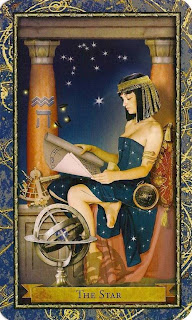 Each Major Arcana card is represented by a Mandrake Academy professor. I find the assignments to be clever and appropriate. I love that The Star is the Professor of Astrology and that Strength is the Professor of Familiar Creatures. As you might expect, The Emperor is Headmaster of the academy. Judgment is Proctor of Final Exams, and The World is Queen of the Witches.

For each Major Arcana card, Kenner provides Key Symbols, Practical Magic applications, and a special tarot spread associated with the card (the spreads are listed on a separate page for easy access). Details are also supplied concerning the areas of expertise associated with each professor or administrator. For example, The Hanged Man is Professor of Runes. In that chapter, Kenner discusses runes in general and the Elder Futhark in detail.

At the beginning of her section on the Minor Arcana, Kenner writes: "Now that we've been through the major arcana, it's time to put theory into practice." We are then introduced to The School of Wands, The School of Cups, The School of Swords, and The School of Pentacles. We are given a quick course in Number Magic, One through Ten. 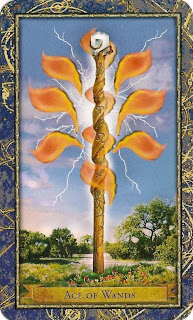 Bullets are used throughout the book to organize the material, giving the pages an attractive, accessible appearance.

I particularly like the Key Symbols segments of this book. The information included in these sections applies not just to this deck but to any Tarot deck based on the RWS tradition. For example, in the Key Symbols section for Strength we see: "The professor's fiery red hair, like a lion's mane, hints at her connection to Leo. So does the ruby-red heart pinned to her blouse, and the giant glyph for the sun behind her. Leo rules the heart, and Leo is ruled by the sun." 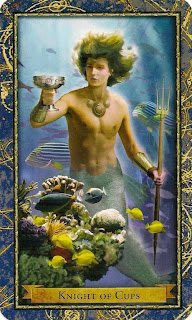 In the Handbook, the Court Cards are grouped together in a section titled The Royal Families.  Kenner writes, "The court cards in the Wizards Tarot depict the elemental creatures that rule the natural world. . . They represent a daughter, a son, a mother, and a father." Each Page is called a Messenger (for example, the Page of Wands is Messenger of Fire); each Knight is called a Hero; each Queen is called a Guardian; and each King is called a Ruler.

An excellent Recommended Reading list is provided at the end of the book, along with information on how to contact the author.

The art on Tarot cards plays a huge role in whether I'm attracted to a deck or not. The artist for the Wizards Tarot, John Blumen, has created the sort of bright, compelling, evocative digital images that this deck deserves (and that I love). The level of detail in the images is impressive. 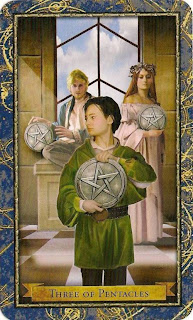 In an interview at http://wizardstarot.com/blumen.htm, Blumen explains that he got family and friends to serve as models for the Wizards Tarot cards. His son was the model for the Death card; Blumen himself modeled for the King of Swords, the Hermit, and the Knight and King of Pentacles. Blumen notes in the interview that the photos are just a starting point, and that often the finished image may not even resemble the model.

Whatever his method, Blumen did a fabulous job of capturing the spirit, essence, and tone of the Wizards Tarot. Because he used human models, I felt that I could relate to the characters on the cards. (I should add that I normally don't like decks that use human models. It's just a personal preference. However, I do like what Blumen has done with his illustrations for this deck.)

Here's what you get with the Wizards Tarot:

I think that beginning Tarot students could easily use this deck. I also think that the more experience a student has with the RWS, the more he or she can appreciate and gain from the Wizards Tarot.

Per the FTC regulations, please note that Wizards Tarot was sent for review by Llewellyn Publications at no charge to the reviewer.