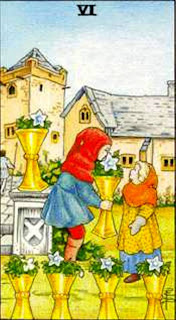 In Anna Cook's TD system, cards 2 through 10 are known as Subject Cards. They are viewed as having a strong impact on our immediate agenda, on situations, moods, opportunities or obstacles that pass quickly. The number on the card reveals the situation. The suit and definition suggest the reason for the situation, along with options and the most beneficial approach to take.

The suit of Cups represents Emotion, including dreams and that which gives meaning to your life. This is a fairly standard Tarot association. The astrological aspect of this system comes into play when we start talking about the number on the card.

To interpret the number Six, we can look at the astrological Sixth House, which is considered to be the house of service to others, work, and health. In a birth chart, this house helps us understand how we express our need to help others or to be useful. It also reveals information about our state of health and illness that is brought on by worry or emotional upsets. In keeping with this association, Anna Burroughs Cook writes concerning the Six of Cups: "The more challenging the situation or the other cards in the spread the more likely a past indiscretion, oversight or minor medical issue could resurface, to your disadvantage."

The Sixth House is associated with the zodiac sign Virgo (a mutable Earth sign known for being industrious, dedicated, discriminating, attentive to detail, logical, analytical, and critical). Virgo is ruled by Mercury (representing the mind). In the Tarot Dynamics system, Subject Card Six "challenges and rewards your willingness to keep matters running efficiently and harmoniously." The TD system's keyword for Subject Card Six is "Commitment".

As mentioned above, the keyword for the suit of Cups is "Emotional." Thus we arrive as "Emotional/Commitment" for the Six of Cups. 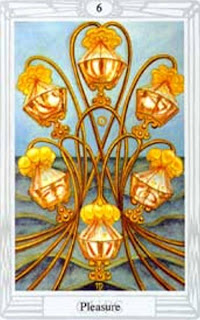 For Crowley and the Order of the Golden Dawn (OGD), the Six of Cups represents the energy of Sun (ego, individuality, power of self, conscious will) in Scorpio (a Water sign ruled historically by Mars and/or Pluto, for many modern astrologers). Scorpio is known as a sensual, secretive sign, intensely emotional and imaginative, and possessing psychic ability. Scorpio rules the Eighth House (house of sex, death, psychic powers, and the afterlife) in astrology. When we consider the association of Scorpio/Mars with the Six of Cups, we can understand Crowley's reference to this card as representing "fulfilment of the sexual Will."

Crowley titles the card "Pleasure." He notes that this means "Pleasure. . . in its highest sense: it implies well-being, harmony of natural forces without effort or strain, ease, satisfaction." Hajo Banzhaf and Brigitte Theler (in Keywords for the Crowley Tarot) describe the energy of the card as: "deep, self-renewing (Scorpio) joy of life (Sun)." As Crowley points out, "the Cups. . . are not yet full to overflowing, as they are in the corresponding card below; the Nine." Osiris Snuffin offers a modification to the title of the Six of Cups, calling the card "Beginning of pleasure. . . due to the harmony of natural forces and not necessarily the fulfillment of desire." 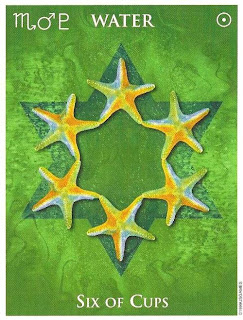 Crystal Love associates the Six of Cups with the second subdivision of the sign Scorpio, with Mars/Pluto as the natural ruler and the Sun as the subruler. She describes this energy as: "creative success, honor, and fame" but adds, "Those under its influence may be proud or even tyrannical in their methods." Love notes that traditionally, the Six of Cups has been said to represent "elements from the past working through the present to create a new future, especially with regard to relationships, friends, or lovers."

Thierens describes the Six of Cups as follows: "The Water of the soul on the house of Taurus, the Second, house of exaltation of the Moon." He goes on to write, "The latter is no doubt responsible for the addictions concerning memory and the past." In astrology, the Second house is associated with the zodiac sign Taurus, ruled by Venus. It is described by astrology.com as the house of "Resources and Values." Joanna Martine Woolfolk tags the Second House as the "House of Money and Possessions."

Thierens writes that the Six of Cups can indicate "Happiness, feeling of riches in oneself, joy, enjoyment, love of Nature and country life. . . Taurus, the everlasting, may indeed produce impressions of the past as well as of the future." (Note: The astrological system devised by Thierens is radically different from that of the OGD. I will not go into detail here, but will simply provide the astrological associations for the card under discussion. If you are interested in learning more about Thierens' system, I recommend his book Astrology and the Tarot.) 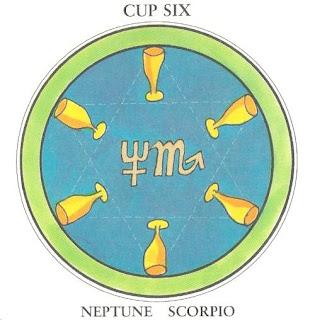 Like the OGD, Mann's deck associates the suit of Cups with the element Water. Mann describes Cups Five, Six, and Seven as "The Sea of Scorpio" and associates them with the time period from 23 October to 22 November. Cup Six is assigned to the Second Decan of Scorpio -- Neptune in Scorpio.

On the King Scale of Color, the color linked with Neptune is pale green. The color for the sign Scorpio is blue-green. Mann's keywords for Neptune are "divinity, idealism, spirituality, dreamlife, clairvoyance, sensitivity." For the sign Scorpio, his keywords are "death of vegetation; life of the seed; survival; endurance. Regeneration; passion; separation; emotional intensity; dependency; losses; inheritance; the occult." Mann's divination meanings for Cup Six include "intuition leading to separation, great emotional intensity and pressure creating tension in sexual life. . . depression caused by difficult and stressed mental states. . . but there is the potential for regeneration." 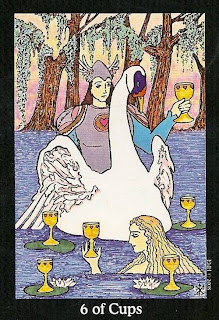 Liz Hazel's suit of Cups is the suit of the Water element, embodying "emotions, feelings, relationships, love, as well as the nature and consequences of emotional attachments." The Six of Cups represents Sun/Scorpio energy. Hazel's illustration depicts a swan carrying a suitor to a woman bathing in a lake. He offers her a chalice. She is surrounded by four more and examining one.

Hazel notes that this card can suggest "romance. . . memories of the past. . . things that evoke nostalgia. . . music, art, food, and clothing associated with sex and seduction." Ill-dignified the card can indicate "living in the past. . . mourning for lost relatives or friends. . . dubious motives in relationships. . .manipulating a lover with sex. . . lack of sex."

In general, I typically see the Sixes of the Tarot as representing reconciliation, reciprocity, communication, resolution of tensions, an understanding of what is real and what is illusion, morality, or social responsibilities. The idea of the Six of Cups as a "nostalgia card" relates well to the need for distinguishing reality from illusion. Sometimes our memories make the past seem better or worse than it actually was.

The systems described above vary widely in their astrological associations for the Six of Cups. Several link this card with Scorpio (Mars/Pluto) and the Sun. However, Anna Burroughs Cook directs our attention to the Sixth House (Virgo/Mercury) as well as the Water signs of the zodiac (Pisces, Cancer, Scorpio). Thierens proposes a link between the Six of Cups, the Second House, Taurus (Venus), and the Moon (ruler of Cancer). Then we have A.T. Mann with his Scorpio/Neptune connection (keep in mind that Neptune rules Pisces).

This is quite a confusing mixture of astrological associations to take into account, and I don't recommend trying to apply all of these associations every time you read the Six of Cups. I simply wanted to gather all of these references in one place to compare and contrast the ways that people have used astrology to help them interpret a particular card.

As always, I welcome your comments!