In addition to my 60 Tarot decks, I own a great many oracle decks. I love these decks, but don't use them as often as I would like. Every now and then, I am going to share a card from one of these oracle decks here on the blog. I hope people will enjoy seeing cards from various decks and will gain something from the interpretations of the cards! 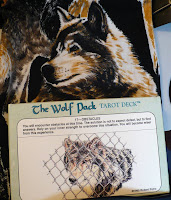 For this exploration I am using The Wolf Pack Tarot Deck created by psychic Robert Petro and illustrated by Pat Morris I categorize this as an oracle deck rather than a tarot deck because although it contains 78 cards, they are not organized into a Major and Minor Arcana. It has no Fool, no Trumps, Pips, or Court Cards.

I acquired this deck because I love animals in general and wolves in particular, and because I really admired the artwork on the cards. Naturally I keep the deck in a special wolf-print bag. Each of the 78 cards in this deck has a title, a short paragraph describing possible interpretations of the card, and an illustration. The deck is available in both color and black-and-white versions. 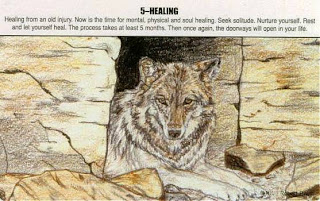 One of the most interesting uses I found for this deck was a series of psychic readings I did for a client whose beloved pet dog had passed away. She wanted to know what I could tell her about the dog's welfare and his journey over the Rainbow Bridge.

I'm normally not comfortable trying to communicate with departed spirits. However, in this case, I felt a very strong connection to this woman and her pet. Using the Wolf Pack deck as an aid, I was able to accurately describe several specific occurrences from the dog's life. Encouraged by my success (as verified by the client), I felt led to use the Wolf Pack deck to try to gain some insight into the deceased dog's welfare. Over a period of several weeks, the cards gave us images of a spirit in transition from uncertainty and loneliness to confidence and assimilation into the next world. At about that time, I found I no longer felt connected to the dog's spirit. He had truly moved on. 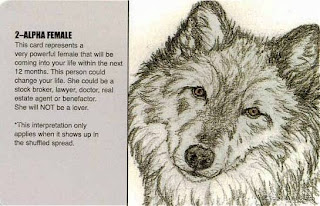 I realize that many serious Tarot readers do not delve into mediumship, and for the most part, I am one of those. However, as Hamlet told Horatio: "There are more things in heaven and earth...than are dreamt of in your philosophy."  Sometimes we surprise ourselves.