First of all, I'd better make a confession: I adore cats. I have many cat-themed decks and I love them all. I was definitely predisposed to like Tarot of Pagan Cats, so you'll need to keep that in mind as you read this review! 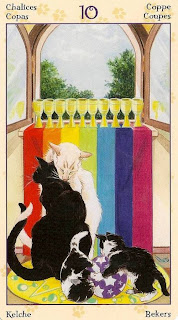 PRODUCT SUMMARY FROM THE PUBLISHER
"Journey with the enlightened feline and welcome their unique secrets. Cats—cute, mysterious, mischievous, or aloof—seem to live in a world between worlds, a realm of magic and power. Access their unique wisdom with this beautifully illustrated deck, featuring traditional Rider-Waite imagery and Pagan symbols."

Strength is Trump VIII and Justice is Trump XI.

The LWB that comes with the deck is translated into English, Italian, Spanish, German, and French. As a professional proofreader, I noticed a number of errors in the introduction printed in the LWB, usually in the form of missing words or the wrong form of a word. It may be that the original was not written in English, and the translator made mistakes. 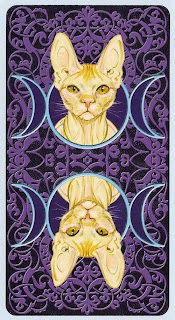 On the backs of the cards, the faces of two cats appear within the pagan triple-moon symbol. The buff colored cats stand out against a deep purple background. The cat is a Sphynx cat, and it also appears front and center on the Justice card. The use of a Sphynx cat on Justice is a well-placed reference to the Egyptian cat goddess Bast.

The front of each card features a subtle cream-colored border decorated with slightly darker paw prints. This allows the art to take center stage the way it should. (Can you tell I'm not a fan of ostentatious borders?)

The font used on the face of the cards is somewhat playful and, in my opinion, very cat-like with its slim, curvy letters. Each card is titled in six different languages.

The quality of the glossy card stock is very good, as I would expect from a Lo Scarabeo deck. The cards are 4-3/4" by 2-1/2", a nice size for shuffling and pulling cards into spreads. 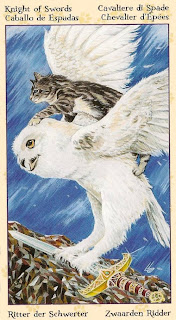 Lola Airaghi's art beautifully and realistically captures the mystery, dignity, and amusing personality of cats. We see the cats in scenes that strongly resemble those of the Rider Waite deck (the gorgeous reddish-brown Queen of Wands cat even has a little black cat companion), yet the cats are never out of their element. They perch on tree branches, lounge in chairs, stretch out in the grass, and climb the curtains. In short, they act like cats. The World card certainly depicts a cat's World, with a prey animal in each corner (a bird for Air, a fish for Water, a mouse for Earth, and a lizard for Fire). Cat lovers will see many different breeds represented in this deck, along with stray cats of every color and stripe. The other animals on the cards are also portrayed with great skill and admirable style. 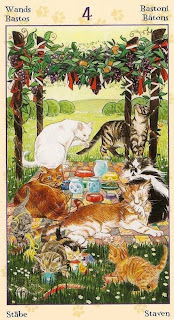 The Christian symbolism so prevalent in the Rider Waite deck is not used in the Tarot of Pagan Cats. Instead, we find various pagan-related symbols such as cauldrons, grimoires, and magic circles. The stained glass window on the 5 of Pentacles features a cauldron plus images of a Wand, Sword, Chalice, and Pentacle.

I am no expert on pagan symbolism, so I'm sure that those who are more informed than I am will see even more references to paganism in the cards. 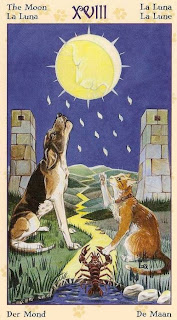 I especially love the 10 of Chalices, which shows a white cat and a black cat intertwined in a manner that reminds me of the Yin-Yang symbol. Two black-and-white kittens play next to them. The Knight of Swords rides upon a huge snowy owl who grips a sword in its talons. A delightful picture of cats and kittens on a picnic graces the 4 of Wands. A cat sits across from a howling dog on The Moon, one paw raised and the other paw on the crayfish as it emerges from the water. I don't know whether it's deliberate, but the cat looks like it is preparing to testify in court, swearing on a crayfish instead of a Bible. On Strength, a white cat draped in a red and green garland places her paw on the head of a small dog.

It helps if you love cats like I do. But even if you're not wild about cats, the Tarot of Pagan Cats may awaken something wild and feline within you. The deck works better as Tarot than some of the other cat-themed decks I have seen, and I'm looking forward to reading with it.