Astrological associations for the Minor Arcana cards typically involve both a planet and a zodiac sign. The attributions established by the Order of the Golden Dawn (OGD) are by far the most commonly used. However, some Tarot decks and Tarot readers use a different set of associations.

As a professional astrologer, I find it interesting to compare and contrast these associations from deck to deck. The use of astrological associations with Tarot is completely up to the reader. This is merely intended to be interesting and fun.

Announcing a couple of changes to my series on Astrology and the Tarot:

(1) With the Two of Swords, I am adding the astrology-tarot associations favored by David Thornton. To learn more about  David, visit his BLOG  or his WEBSITE . You can download his ebook, The Tarot and Astrology, HERE.

Concerning the associations he uses, David notes: "I owe a lot to the GD for suggesting that there were strong links between the tarot and astrology - although I disagree with them, almost entirely, in my attributions. I owe a huge debt to A.T.Mann and his works on astrology - although I disagree with him on a number of counts too. I guess I can claim a moral right to call this my system of attributions. However, I must also express gratitude to those students of tarot and astrology who have gone before me: A.T.Mann, The Hermetic Order of the Golden Dawn, Reinhold Ebertin, Robert Hand, Robert Pelletier."

(2) From this blog entry forward, for purposes of organization, I am going to begin each post with the OGD/Crowley associations, followed by Liz Hazel (The Whispering Tarot), Crystal Love (One World Tarot), A.T. Mann (Mandala Astrological Tarot), David Thornton, Anna Cook, and A.E. Thierens. 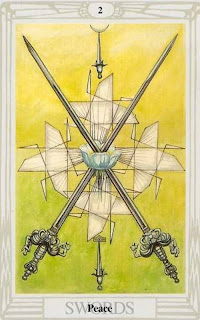 For Crowley and the Order of the Golden Dawn (OGD), the Two of Swords is linked with the placement of the Moon (emotions, the subconscious) in Libra (a Cardinal Air sign known for being peaceable, artistic, and socially adept). Crowley titles the card Peace. He writes: "The Moon is change, but Nature is peaceful; moreover, Libra represents balance; between them, they regulate the energy of the Swords."

Hajo Banzhaf and Brigitte Theler (in Keywords for the Crowley Tarot) describe the energy of the card as: "Balanced, peaceful (Libra) feelings (Moon); need (Moon) for harmony (Libra)." 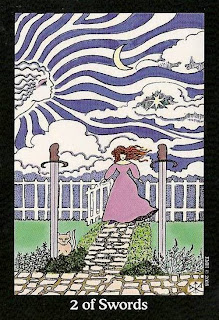 Liz Hazel's astrological associations for the Two of Swords align with those of Crowley and the OGD: Moon/Libra. Hazel's DM related to the Moon include "Hidden or unknown information; choices obscured and require patience to sort through all possibilities. . . Information that may not be true." Libra's influence is seen in the DMs, "Sitting on a fence about a decision. . . Refusal to settle on a choice because of a conflict of interest in the matter." 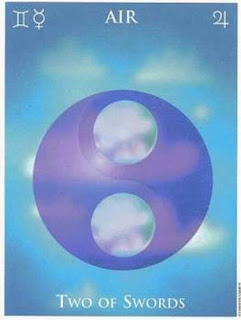 Crystal Love associates the Two of Swords with the first subdivision of Gemini, along with its natural ruler, Mercury, and subruler, Jupiter. She writes: "Jupiter adds a thoughtful and expansive tone fo the Mercurial Gemini. It gives a kind and generous disposition and adds self-confidence.  . . However, a profusion of ideas requires sound judgment through which to filter the numerous impressions that pour in, and a misuse of faculties should be avoided at all costs."

Mann associates the Swords Two with the energy of Venus in Libra. Mann calls Swords Two, Three, and Four "The Winds of Libra," and links Sword Two with the period between September 23 and October 2. The color green is associated with both Libra and Venus on the King Scale of Color. 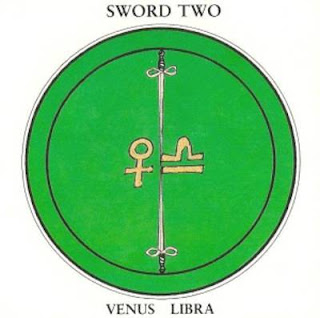 Mann's divinatory meanings for Sword Two: "A harmonious relationship is founded on art, love and perfect balance." Reversed: "Scattered affections created by overidealizing the loved one."

The Tarot and Astrology by David Thornton

Like A.T. Mann, David Thornton associates the Two of Swords with the placement of the planet Venus (planet of love and appreciation) in the Seventh House (House of Marriage and Partnership). As David explains: "Each of the minor cards is attributed to a decanate -- a 10 degree division of the zodiac. The 2, 3 and 4 of Swords are attributed to Libra/7th house. The 1st decanate is ruled by the ruler of the sign -- in the case of the 2 of swords the ruler is Venus. Venus is sociable, friendly, cooperative and accomodating. The 7th house is the house of partnership, relationships and marriage."

Further connections that come to my mind include the fact that the Second House in astrology is associated with the sign Taurus, ruled by Venus, and the fact that the Seventh House is associated with the sign Libra, an Air sign (in keeping with the association of the suit of Swords with Air). Libra is also ruled by Venus, which gives an overall harmonious vibe to the Two of Swords. David Thornton's description of the energy of the Two of Swords is: "Friendly, obliging, a time to enjoy social engagements and pleasures, to express good taste and artistic skill, scattered emotions or affections."

Oh, and look at how the figure on the card below is holding the two swords -- in a V shape. My first reaction is, "V for Venus! David is right!" 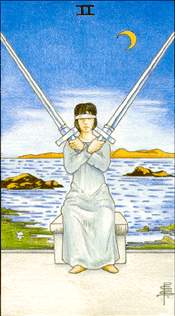 In Anna Cook's TD system, Subject Card Two signifies Interaction. The key word for the suit of Swords in this system is Challenging, which gives us Challenging/Interaction for the Two of Swords. In astrology the Second House is commonly known as the House of Possessions. Lest we think this applies only to material possessions, I will quote the gurus at www.astrology.com: "We own our feelings and emotions, as well as our inner selves, abilities, needs and wants. When we own up to something, we are in fact claiming ownership of our greatest possession, our self." Ultimately, we're talking about values. What we "possess" and what we do with those "possessions" has a powerful effect -- for better or worse -- on our Interactions with other people.

Thierens associates the Two of Swords with "The element Earth on the Second house." He writes: "By virtue of the Venusian qualities of the Taurus-house, this Saturnian and Martian element, as will easily be understood, leads up to the magnetic affinity of the sexes, consequently to intimacy, attraction, affection, etc." Thierens points out that the less desirable attributes of the sign Taurus may also make themselves known in this card: "We see in such cases the possibility of stupid resistance, dullness, cruelty, relentless opposition and recreation, passive obstruction, perhaps silent, unforgiving hatred."