Death & The Ten of Swords - What’s the difference?


Please welcome Helen Howell to Tarot Notes for one of her delightful, insightful "rambles."


Death & The Ten of Swords - What’s the difference?
by Helen Howell 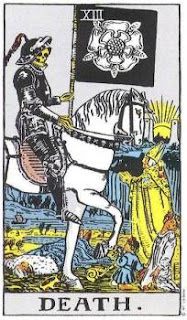 Behold a Pale horse and his name that sat on him was Death!
- Revelation 6.8

Have you thought about the difference between the Death Card and the 10 Swords? Both portray death, that’s for sure. Both indicate an ending of some sort, but is one more final than the other? Is one more imminent than the other? Or do they symbolise exactly the same thing? Out of all of these questions, let’s see if I can come up with some answers that fit. 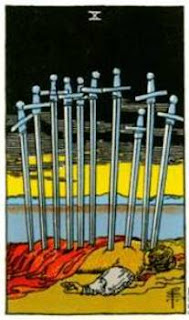 The first difference is obvious, we have a Major card versus a Minor card. This tells us that one card signifies a life changing event, while the other is more like the small details within life.

The second difference that jumps out at me, is that the Death card tells us that something has come to its end. It’s finished, dead, over with, you know dead is dead. Whereas the 10 does seem to indicate that something is coming to its end, not quite there yet. The figure in the Rider Waite Card is still raising his right hand in a sign of forgiveness -- it just needs to be accepted in order for it to end.

It seems to me that the minor card is a smaller part of the Death card. It’s the realisation or acceptance element, that illustrates that perhaps this has not been achieved just yet. Whatever it is pins you down.

The Death card illustrates that in order to progress, for transformation to take place, we must move forward from that which has died. It’s a cyclic card, it says that all things go on even in death, it’s just that they may not go on in the same way as before. However, I do think the major thing that makes this card different from the 10 of Swords is, that it signifies that death has arrived and there is no escaping it. A way to think of the Death card could be that it is by letting go of the old self that a transformation is achieved. Life changing as I said.

The esoteric name for Death is The Child of the Great Transformers: the Lord of the Gates of Death. The Ten of Swords on the other hand is called The Lord of Ruin which does seem very apt for this card, as we look at the man with 10 swords in his back and think the worst is over, how much worse could it get?

Swords being the suit of communication, thoughts, mental activity, this card then shows us the pain endured by perhaps back stabbing words, thoughts that pin you down if you allow them to. That’s the difference, the 10 of Swords allows you to change to release yourself from this situation, unlike Death which shows us clearly that something has come to a natural end. The 10 of Swords indicates the need to re-evaluate and change the course of action in order to be freed.

Both cards indicate acceptance of a situation, but in the Death card’s case, it’s already died, whereas in the 10 of Swords case it’s in your own hands to end it. Note in the Rider Waite 10 of Swords, the figure appears to be giving the sign of benediction or blessing. This links him to Christ and more to the forgiveness Christ would bestow on those who inflict hurt on him. A major part of accepting an ending in this image is being able to forgive or let go of whoever or whatever, including yourself, caused the pain in the first place.

What’s the real difference then between these two cards? Death tells us that something is or has come to its natural end, nothing will change that. 10 of Swords indicates it is us who will bring an ending about.

Both these cards hold the opportunity of transformation within our lives. Both illustrate to us endings and beginnings, but the difference lies in that in the 10 Swords it is us who controls whether it ends or not.

Cards are from The Rider Tarot Deck
designed by Pamela Colman Smith
under the direction of Arthur Edward Waite
U.S. Games Systems, Inc.