The Hierophant, The High Priestess, and The Hermit

Please join me in welcoming Helen Howell with another of her insightful, delightful "rambles" about the Tarot cards!

THE HIEROPHANT, THE HIGH PRIESTESS & THE HERMIT
by Helen Howell 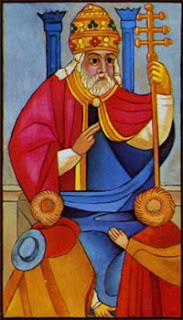 The Hierophant is often seen as a mentor of spiritual guidance. The depiction of Le Pape shows him with the power of the church behind him. This power is an established one, and so the Hierophant becomes an image of tradition, representing those tried and tested ways. Certainly in the Marseille type decks where he is presented as the Pope, it does seem to symbolism how the people of the time looked to the church for guidance. The church had the power and with that came control.

From one of our more modern decks -- The Deviant Moon -- The Hierophant image serves to illustrate that sometimes people were more than ready to hand over their own responsibility and be the doll in the pocket of the church. 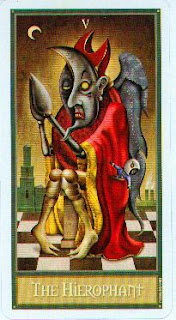 The Hierophant, therefore, can be seen to have special powers through the ceremonies of the church. These could be considered to be mystical, and if not that, then spiritual. As depicted as part of the hierarchy of the religious system, he then becomes the link to a higher authority/knowledge/the man upstairs. 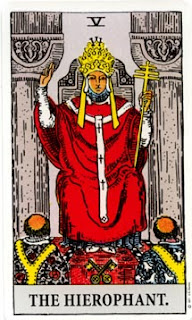 This image does sort of tie him in with the High Priestess, who turns within in order to hear the messages of the higher-self. 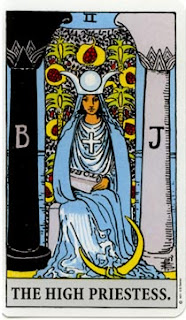 Another Link that draws The Hierophant and The High Priestess together is within the RWS deck. Both these two cards have pillars that flank the figures. Although Waite tells us that the pillars in The Hierophant's image are not the same as the HP's, and of course they are not. Hers are black and white and his are grey. But if we look at the symbolism of the colours then there is a similarity.

She sits between two opposites, black and white, a symbol of the duality that exists within. He sits between two grey columns, symbolising the harmonising of opposites (black mixed with white make grey). The Hierophant is a symbol of bringing the spiritual down to the physical and manifesting it into everyday life, whereas The HP doesn't reveal outwardly those secrets she discovers. The connection I see between these two is one of a spiritual nature, although our Hierophant represents the exoteric aspects of spiritual/religion and she the esoteric.

But what of the Hierophant and the Hermit -- not forgetting of course that they are both 'Teacher Cards' within the deck?

Well, it's obvious that The Hierophant teaches us the spiritual beliefs or principals in an outer way. He is very often depicted as carrying the 3 cross sceptre, a symbol of creative power over the three worlds of the divine, spiritual and material. In other words, he brings the spiritual down to the material. 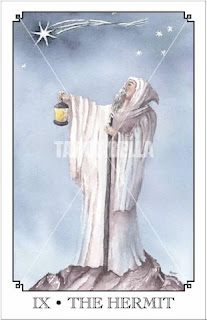 The Hermit on the other hand is depicted as a wise old man who lights the way for us with a lantern. His reclusiveness becomes a representation for us of inner awareness. He shows us that wisdom can be gained through introspection and meditation – he is the Teacher who offers us the advice we need in that inner quest for finding a meaning to life. The Hermit stands upon a mountain top indicating that he has managed to reach a height of awareness.

The Hierophant is our tangible link to spirituality if you like, where as both The High Priestess and The Hermit are the link to self awareness that brings us closer to our spiritual self. 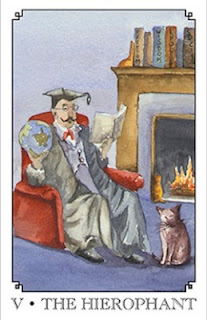 I think it worth remembering though that more and more in modern decks the Hierophant is changing his image and not necessarily suggesting anymore that one should follow the rules and regulations that have been set down, blindly. Rather, he becomes a symbol of knowledge and a seeker of truth, for it is in knowledge that one is set free. This too becomes another link to The Hermit who quietly examines what he knows in order to see if it is really what he believes it to be.

Now perhaps when I hold The Hierophant in my hand I will not think of him in isolation, but rather as just one small part of a much bigger triangle.