Journey through My Decks: 3 of Cups (by Zanna)

In this series of posts, I plan to discuss all of the Tarot cards in order, using a different deck for each card. Today I'm exploring the THREE OF CUPS from the Universal Waite deck. 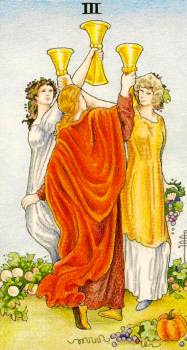 In an effort to create a more colorful rendition of the Rider-Waite deck with "softer color tones and subtle tints instead of flat areas of color," U.S. Games Systems commissioned Mary Hanson-Roberts to execute a new coloring of Pamela Colman Smith‛s drawings. The end result, according to Stuart R. Kaplan (who conceived the idea), "reveals more details in the figures, costumes, and symbols than seen in the original designs."

Arthur Waite’s description of the card from his Pictorial Key to the Tarot (published by WeiserBooks): “Maidens in a garden-ground with cups uplifted, as if pledging one another.”

The impression I get from the image on this card is one of satisfactory completion or conclusion, harmony, and good cheer.

If one views the pips as following a path which begins with the Ace and continues to the Ten (rather than Ten to Ace), Three is too early to be considered an overall, final completion. Instead, it is often seen as the conclusion of one phase or segment of a larger matter. It is as if the querent has reached a plateau or moment of pause during a longer climb up the mountain. There is an implication that a long journey still lies ahead. The birth of a child or a wedding are good examples of this. Even as we pause to celebrate, we are also preparing for the next phase.

Like other Threes in the tarot, the Three of Cups corresponds with Trump 3, The Empress; Trump 12, The Hanged Man (1+2 = 3), and Trump 21, The World (2+1=3). Three implies creation — as in two opposites coming together to produce a creation. The tension often associated with two is relieved in the production of that third entity.

Cups are typically associated with the element of water and with emotion, intuition, receptiveness, family, and love. They are also the suit of sensual pleasures including enjoyment of food and drink. With my fondness for alliteration, I like to say that Cups relate to Comfort, Compassion, Caring, and Clairvoyance.

Reversed (or poorly aspected), the Three of Cups can signify excess with regard to physical enjoyment or the pleasures of the senses (the proverbial “too much of a good thing”). Waite also provides “expedition, dispatch, achievement, end” as DMs for the reversed card.

In her book Complete Guide to Tarot (The Crossing Press), Cassandra Eason suggests a possible rivalry in love or friendship, emotional conflicts in which two people seek sympathy from a third, resulting in stress.

Waite also includes additional meanings in the back of his book: “Unexpected advancement for a military man” (which seems to me to come out of left field) and, reversed, “consolation, cure, end of the business.”
on Wednesday, February 23, 2011