Elemental Tarot
Artwork by Marco Turini
Copyright 2010 Lo Scarabeo
To read the interview I did with this unique, evocative deck, click HERE. 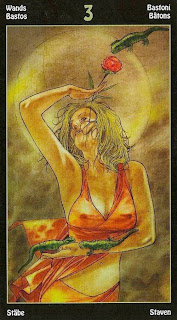 Description from publisher: "The four elements—earth, air, fire, water—play a vital role in manifesting change of any kind. Featuring an arcana suit devoted to each element, this powerful and gorgeous deck is immersed in the elemental energies—making it an ideal instrument for pagans, witches, magic practitioners, or anyone desiring to change the course of their life."

The cards are approximately 4-1/2 by 2-1/2 inches in size. They are printed on glossy card stock of average weight and quality. The art is somewhat inconsistent in that the occasional image appears to be collage-style, while most are more of a straightforward, realistic style. Along with the images themselves, the coloring of the cards creates a distinctly pagan mood and tone. As with other Lo Scarabeo decks, the cards feature the name or the suit in various languages. The LWB is also translated into several languages. 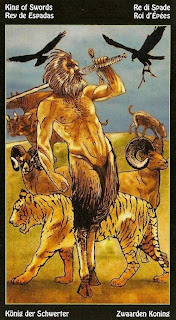 I was initially attracted to this deck because I am fascinated by the idea of "elementals" -- mythological beings that first appeared in the 16th century in the works of Paracelsus. The Minor Arcana of the Elemental Tarot incorporates elementals as follows: 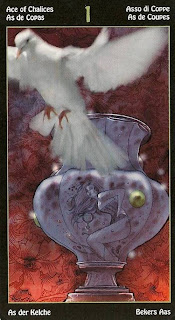 The elementals are shown in the illustration on the back of each card, which also incorporates a flowery design and a piece of brown paper or parchment with writing on it.

The number of elementals on the face of each card corresponds to that card's number (for example, on the Five of Wands, we see five salamanders). Many of the Minor Arcana cards also include human beings or beings that are at least part human. Although the deck makes sense in terms of elemental associations, in most cases the Minors do not express traditional Rider-Waite-Smith meanings for the cards.

In the LWB, each suit is given a keyword. That keyword then becomes part of a longer keyphrase given to each card within the suit. For example, the keyword for the suit of Cups is love. The Ace is called "Pure love," the Two is called "New love," the Three is called "Simple love" and so forth. In addition, a message accompanies each card. For the Ace of Cups, the message is: "The gift of love and grace spreads its wings over your life." 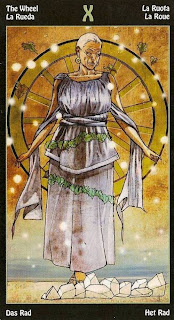 The Major Arcana cards feature human beings rather than elementals. As with the Minors, the images on the cards almost never conform to RWS imagery.

An extra "Significator" card is included in the deck. The illustration shows four hands, each holding an item that represents one of the suits/elements.


This is not a deck for new Tarot students or readers who prefer the images on the cards to be based on the RWS. You will need to be willing to relate to the deck on its own terms, reinterpreting the cards as you go. At times, the descriptions in the LWB do not seem to go with the images on the cards, which is frustrating if you are looking to the LWB for assistance in understanding what is pictured. Also, if you dislike nudity on Tarot cards, stay away from this deck.

If you enjoy the art, and are willing to focus on messages you receive through intuition and/or the LWB, the Elemental Tarot could become one of your favorites. Personally, I am looking forward to doing readings with and gaining insight from these elementals. I think I will enjoy considering the images from different "angles" (similarity or dissimilarity to RWS, compatibility or incompatibility with LWB description, and on their own merits).