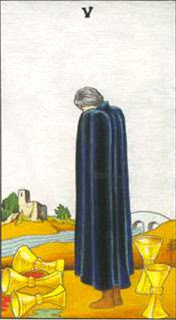 In Anna Cook's TD system, cards 2 through 10 are known as Subject Cards. They are viewed as having a strong impact on our immediate agenda, on situations, moods, opportunities or obstacles that pass quickly. The number on the card reveals the situation. The suit and definition suggest the reason for the situation, along with options and the most beneficial approach to take.

The suit of Cups represents Emotion, including dreams and that which gives meaning to your life. This is a fairly standard Tarot association. The astrological aspect of this system comes into play when we start talking about the number on the card.

To interpret the number Five, we can look at the astrological Fifth House, which is considered to be the house of creativity, romance, pleasure, children -- and also "chance" or risk-taking (as in gambling). In a birth chart, this house helps us understand how we express our creativity or appreciate creativity in others and how we seek recreation (hobbies, favorite forms of entertainment, sports we enjoy, etc.) It is sometimes described as the House of Fun and Games.

The Fifth House is associated with the zodiac sign Leo (a fixed Fire sign known for exuberance, creativity, and showmanship, with a dash of egomania). Leo is ruled by the Sun (representing the ego and individuality).

So how can we relate all of this fun and frolic and risk-taking to the image on the Five of Cups? Anna Cook points out that the more planets someone has in the Fifth house in their birth chart, "despite their creativity, life can be seen as too much of a party. . ." What happens when we treat life as one big party, pursuing only that which pleases us, throwing caution to the wind? At some point, more than likely, we are going to be brought up short by an event or circumstance that blows us out of the water (or blows us INTO deep water, as in "emotional distress"). We may question the meaning of our life or suddenly realize what we have lost or unwittingly thrown aside while focused on entertainment.

The TD system's keyword for Subject Card Five is "Conflict". As mentioned above, the keyword for the suit of Cups is "Emotional." Thus we arrive as "Emotional/Conflict" for the Five of Cups. It's not surprising that "too much of a good thing" might eventually lead us to that emotional state, if we are not careful. Imagine yourself having a great time in a "Funhouse" -- until you find that you are lost, surrounded by distorted, disturbing mirror images of yourself. 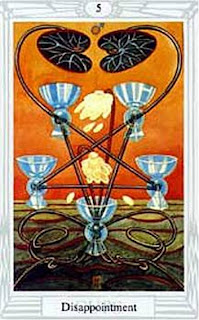 For Crowley and the Order of the Golden Dawn (OGD), the Five of Cups represents the energy of Mars (planet of physical energy, force) in Scorpio (a Water sign ruled historically by Mars and/or Pluto, for many modern astrologers). Scorpio is known as a sensual, secretive sign, intensely emotional and imaginative, and possessing psychic ability. Scorpio rules the Eighth House (house of sex, death, psychic powers, and the afterlife) in astrology.

Crowley titles the card "Disappointment." (Book T, on the other hand, titles it "Loss in Pleasure," and Crowley notes that the card suggests that "the anticipated pleasure is frustrated.") Hajo Banzhaf and Brigitte Theler (in Keywords for the Crowley Tarot) describe the energy of the card as: "power (Mars) growing from decay (Scorpio)." Note that the stems of the lotus flowers on the card are red (the color of Mars) and the sky is a fiery orange. The "fiery" aspect of this card is also due to the Qabalistic attribution assigned by Crowley. 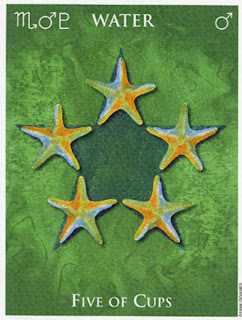 Crystal Love associates the Five of Cups with the first subdivision of the sign Scorpio, with Mars/Pluto as the natural ruler and Mars as the subruler. She describes this energy as: "a strong, forceful and energetic influence." She notes that this subdivision has a combative nature, which "makes for difficulties in relationships, with power struggles or a need for control and revenge, or both."

A.E. Thierens, PhD. (Astrology & the Tarot)
Thierens describes the Five of Cups as follows: "The Water coming on the First house, the ascendant." In astrology, the First house is associated with the zodiac sign Aries, ruled by Mars. It is described by astrology.com http://www.astrologyzine.com/what-is-a-house-in-astrology.shtml as the house of "Personal Appearances." The First house is associated with our style, mannerisms, and temperament." Joanna Martine Woolfolk tags the First House as the "House of Self."

Thierens writes that the Five of Cups can indicate "Family-matters, care to be taken of them, sorrow or pleasure, emotion, material difficulties." (Note: The astrological system devised by Thierens is radically different from that of the OGD. I will not go into detail here, but will simply provide the astrological associations for the card under discussion. If you are interested in learning more about Thierens' system, I recommend his book Astrology and the Tarot.) 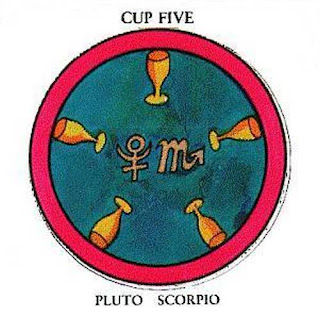 Like the OGD, Mann's deck associates the suit of Cups with the element Water. Mann describes Cups Five, Six, and Seven as "The Sea of Scorpio" and associates them with the time period from 23 October to 22 November. Cup Five is assigned to the First Decan of Scorpio -- Pluto in Scorpio.

On the King Scale of Color, the color linked with Pluto is pale red. The color for the sign Scorpio is blue-green. Mann's keywords for Pluto are "power, the masses, magic, propaganda, force, force majeure, frankness." For the sign Scorpio, his keywords are "death of vegetation; life of the seed; survival; endurance. Regeneration; passion; separation; emotional intensity; dependency; losses; inheritance; the occult." Mann's divination meanings for Cup Five include "courage and the drive to succeed at all costs, strong unconscious pressures influence others negatively, tragic events due to the inability to change enough, losses despite apparently positive circumstances." 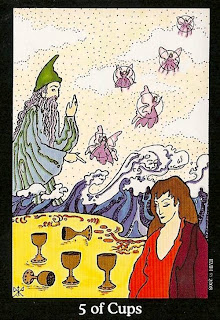 Liz Hazel's suit of Cups is the suit of the Water element, embodying "emotions, feelings, relationships, love, as well as the nature and consequences of emotional attachments." The Five of Cups represents Mars/Scorpio energy. Hazel's illustration depicts a somber woman looking down at five cups in the sand. Two are tipped over; three stand empty. In the background, a "sea wizard commands the wave to rise and dance, and faces can be seen in the froth."

Hazel notes that this card can suggest emotional choices and changes, mixed results, mixed feelings, endings and beginnings of romance that are surrounded by tumultuous events, medications that need to be adjusted." Ill-dignified the card can indicate being "a new love, hope for the future, a secret admirer. . . gaining respect for grace and poise under difficult circumstances. Focusing on opportunity rather than chaos."

In general, I typically see the Fives of the Tarot as representing conflict, disequilibrium, or uncertainty of one type or another. I can appreciate the association between the Five of Cups and Scorpio/Mars/Pluto (seen in most of the descriptions above) with the standard Rider-Waite-Smith card image. The image suggests a great depth of disappointment, regret, or disillusionment. The figure on the card does not see that two of the five cups remain upright.

Thierens offers us the First House (Aries, ruled by Mars), which I view as a more overtly aggressive form of Mars energy than that exhibited by Scorpio (which tends to be passive-aggressive). Remember that in the OGD system, The Tower is associated with the planet Mars. Thus we get a sense that something dramatic or drastic has happened to cause the figure on the card to question his life and how he has been living it.

Cook adds another dimension by bringing in the Fifth House, Leo, and the Sun. We get a sense that the person on the card may have focused his energy on living the high life, only to find that such behavior has brought him low and left him with an emptiness he cannot fill.

As always, I welcome your comments!