Thoth Tarot by Aleister Crowley
For Crowley and the Order of the Golden Dawn (OGD), the Three of Cups represents the energy of Mercury (planet of the mind and communication) in Cancer (a Water sign ruled by the Moon and known for being imaginative, emotional, sensitive, loyal, and moody). Like Book T, Crowley titles the card "Abundance." Hajo Banzhaf and Brigitte Theler (in Keywords for the Crowley Tarot) describe the energy of the card as: "emotional (Cancer) exchange (Mercury), emotional (Cancer) intelligence (Mercury)." On the card, the three cups are adorned with pomegranates, a reference to the myth of Persephone and Demeter and an interesting link to The Empress card (Trump 3) in some decks (not the Thoth). Osiris Snuffin points out color symbolism in the Thoth Three of Cups associated with the Sun (yellow lotuses) and Aries (red cups). 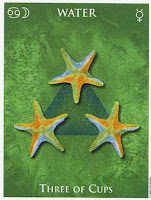 One World Tarot by Crystal Love
Crystal Love associates the Three of Cups with the second subdivision of the sign Cancer, with the Moon as the natural ruler and and Mercury as the subruler. She describes this energy as follows: "The intuitive and homey nature of Cancer is given strong intellectual and creative capabilities with the presence of Mercury. . . There is literary ability, a strong imagination, and a love of travel."

A.E. Thierens, PhD. (Astrology & the Tarot)
Thierens describes the Three of Cups as follows: "The Water on the house of friends, the Eleventh, must bring concord, etc. Friendship, but on this airy house more platonic than that of the foregoing card [Two of Cups]. . . As the eleventh house also rules the blood, it is very favourable for health and eventual recuperation. Moreover this house has to do with commerce and business, and the card favours them beyond a doubt..."  (Note: The astrological system devised by Thierens is radically different from that of the OGD. I will not go into detail here, but will simply provide the astrological associations for the card under discussion. If you are interested in learning more about this system, I recommend the book referenced above.) 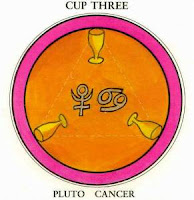 The Mandala Astrological Tarot by A.T. Mann
Like the OGD, Mann's deck associates the suit of Cups with the element Water. Mann describes Cup Two, Three, and Four as "The Rains of Cancer" and associates them with The Summer Solstice (21 June to 22 July). Cup Three is assigned to the Second Decan of Cancer -- Pluto in Cancer. On the King Scale of Color, the color linked with Pluto is pale red. The color for the sign Cancer is yellow-orange. Mann's keywords for Pluto are "power, the masses, magic, propaganda, force, force majeure, frankness." For the sign Cancer, his keywords are "mothering, fecundation, fertilization, feeling, emotions, mother, home and family, the unconscious, protective, urge, and possessiveness." Mann's divination meanings for Cup Three include "An emotional change of mind discovered through contemplation leads to the need for withdrawal. Great tension at home creates emotional flare-ups and a change in attitude to loved ones."

The Whispering Tarot by Liz Hazel
Liz Hazel's suit of Cups is the suit of the Water element, embodying "emotions, feelings, relationships, love, as well as the nature and consequences of emotional attachments." The Three of Cups represents the Mercury/Cancer energy we see in other decks. Hazel's illustration depicts three mermaids holding three cups burst from the ocean. Hazel notes that this card can suggest "delightful celebrations and parties, a romantic interlude. . . Good news or letter from a special friend. . . Love freely given and received. . . Talent recognized and developed. . . Groups of people who share similar interests." Ill-Dignified, the Three of Cups can indicate "a shallow interest. . . spurning an offer of love for no real reason. An offer of love that is inappropriate. . . An absence of a lover. . . A love relationship that is between two people with a big age difference."

Looking strictly at the Mercury-Cancer designation, I get an interesting sense of conflict between "mercurial" tendencies (capriciousness) and the homebody, loyal nature of Cancer. Some of the phrases provided by Joanna Martine Woolfolk concerning the placement of Mercury in Cancer in a birth chart are: "You are chameleonlike in the way you are able to adapt yourself to different kinds of people. . . Your outlook is always intensely personal -- you're fond of discussing large events in terms of your own feelings. . . Sometimes you are plagued with irrational phobias, such as a fear of flying."