A Journey through My Decks: TEN OF WANDS

In this series of posts, I plan to discuss all of the Tarot cards in order, using a different deck for each card. Today I'm exploring the Ten of Wands from Tarot of the Hidden Folk by Giacinto Gaudenzi (published by Lo Scarabeo). 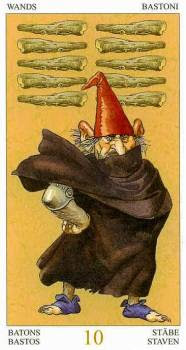 The Lord of Oppression
"He has considerable energy but it's best to stay clear of him."
(from the LWB)

Book T* (which also calls this card "The Lord of Oppression") associates the Ten of Wands with Saturn (planet of lessons and limitations) and Sagittarius, a mutable Fire sign known for being freedom-loving, expansive, and open to new ideas and exploration.

Of the Tens in general, Aleister Crowley writes that they represent "the end of all energy. . . the current has derogated from the original perfection. The Tens are a warning; see whither it leads -- to take the first wrong step!"

In the Ten of Wands, Saturn exerts its no-nonsense influence in exuberant, sometimes irresponsible (but charmingly so) Sagittarius. In Crowley's words, "Saturn is material, slow, heavy, obstinate, and obscure" whereas Sagittarius is "spiritual, swift, light, elusive, and luminous."

As Crowley puts it, the Ten of Wands "is what happens when one uses force, force, and nothing else but force all the time. . . the Wand has conquered; it has done its work; it has done its work too well; it did not know when to stop. . .  It is a stupid and obstinate cruelty from which there is no escape. It is a Will which has not understood anything beyond its dull purpose. . ."

Sagittarius is not one to take such treatment lying down. The result of Saturn's efforts to control and limit Sagittarius is that the flames of Sagittarius lose their ability to inspire, energize, and illuminate. Instead, they "run wild," becoming "Fire in its most destructive aspect." (Crowley) Nothing brings a Fire sign's blood to a boil more quickly than being told "no" or "don't" or "you can't." (I call this the Eternal Toddler Syndrome... Terrible Twos Forever!)

Of course, Saturn's determination to "limit" is not necessarily a bad thing. It may be that in our enthusiasm or eagerness, we have failed to recognize our own limitations and have therefore taken on more than we can reasonably handle, thus "oppressing ourselves".

The Lord of Oppression wears a red hat, signifying Fire, and a brown robe, signifying Earth (Saturn rules Capricorn, an Earth sign). He wears slippers without toes, displaying long, sharp toenails. I have not yet decided what to make of that.

This card alerts me to the fact that directing energy single-mindedly toward a goal can eventually create an oppressive situation and might even lead to a failure of ambitions, in whole or in part. The card also may signal the need to be conscious of any tendency to selfishly overburden others or trample their ambitions in pursuit of one's own.


---------------------------
* Book T - The Tarot[/i], Comprising Manuscripts N, O, P, Q, R, and an Unlettered Theoricus Adeptus Minor Instruction. A Description of the Cards of the Tarot with their Attributions; Including a Method of Divination by Their Use. A public domain manuscript.