Thoth Tarot by Aleister Crowley
For Crowley and the Order of the Golden Dawn (OGD), the Two of Cups represents the energy of Venus (planet of love and appreciation) in Cancer (a Water sign ruled by the Moon and known for being imaginative, emotional, sensitive, loyal, and moody). Like Book T, Crowley titles the card "Love." This card is also linked with the energy of Jupiter (planet of luck and expansion), which is exalted in Cancer. Hajo Banzhaf and Brigitte Theler (in Keywords for the Crowley Tarot) describe the energy of the card as: "loving, delightful (Venus) devotion and feelings (Cancer) of emotional (Cancer) connection (Venus)." Notice the overflowing chalices and intertwined, water-sprouting fish. Two blossomed lotus flowers, connected with each other, float on a calm, peaceful sea.

One World Tarot by Crystal Love
Crystal Love associates the Two of Cups with the first subdivision of the sign Cancer, with the Moon as the natural ruler and and Venus as the subruler. She views this energy as bringing "success in social and artistic matters, possibly through partnership, and a fondness for entertainment and pleasure."

A.E. Thierens, PhD. (Astrology & the Tarot)
Thierens describes the Two of Cups as follows: "The Water of the soul on the house of Capricorn, the Tenth house of the act, the deed, manifestation. The two souls find each other here in an act, which of course must be that of meeting in the body." For Thierens, the Two of Cups is about attraction, desires, and love-making -- which is similar to the meanings provided in the other decks I am discussing. However, the associations with Capricorn (an Earth sign known for being disciplined, responsible, ambitious, and determined) and the Tenth House (House of Career and Public Standing) seem to be a distinct departure from the Moon-Venus-Cancer energy described by Crowley et al. (Note: The astrological system devised by Thierens is radically different from that of the OGD. I will not go into detail here, but will simply provide the astrological associations for the card under discussion. If you are interested in learning more about this system, I recommend the book referenced above.) 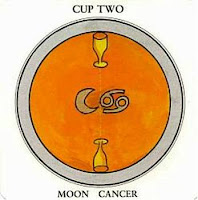 The Mandala Astrological Tarot by A.T. Mann
Like the OGD, Mann's deck associates the suit of Cups with the element Water. Mann describes Cup Two, Three, and Four as "The Rains of Cancer" and associates them with The Summer Solstice (21 June to 22 July). Cup Two is assigned to the First Decan of Cancer -- Moon in Cancer. On the King Scale of Color, the colors linked with the Moon are indigo, silver, and white. The color for the sign Cancer is yellow-orange. Mann's keywords for the Moon are "soul, unconscious, personality, instinct, emotions, and fertility." For the sign Cancer, his keywords are "mothering, fecundation, fertilization, feeling, emotions, mother, home and family, the unconscious, protective, urge, and possessiveness." To me, this gives a different "feel" to this card from that suggested by the other decks and authors mentioned in this post.

The Whispering Tarot by Liz Hazel
Liz Hazel's suit of Cups is the suit of the Water element, embodying "emotions, feelings, relationships, love, as well as the nature and consequences of emotional attachments." The Two of Cups represents the Venus/Cancer energy we see in other decks. Hazel's illustration emphasizes a male-female union and a desire for love and romance. In keeping with the rulership of the Moon over Cancer, Hazel notes that this card can suggest "unrealistic hopes and dreams about relationships" or "a fantasy lover."

I am inclined to stick with the Moon-Venus-Cancer associations for the Two of Cups, although I am intrigued by what Thierens wrote about the card. Relationships can, and sometimes do, involve ambition or "reputation" (Capricorn traits). One example might be the marriages of members of royal families or even average people who stand to gain status from a relationship.