A Journey through My Decks: NINE OF WANDS (by Zanna)

In this series of posts, I plan to discuss all of the Tarot cards in order, using a different deck for each card. Today I'm exploring the Nine of Wands from the Celestial Tarot, created by Kay Steventon, with a book written by Brian Clark (published by US Games Systems, Inc.) 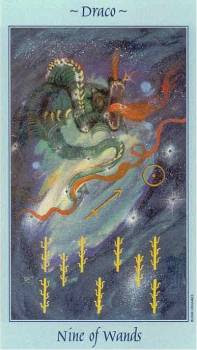 The suit of Wands in this deck is subtitled The Quest for Fire. It is associated with the zodiac signs Aries, Leo, and Sagittarius. Brian Clark notes that Fire embodies both the sacred and the wild. It is a "transcendent element, symbolizing spirit and the religious quest." Fire can be primarily future-oriented, extroverted, or introverted. Fire's gifts include "its faith, sense of humor, and ability to see the wider horizons of life." The suit of Wands represents "heroic progress, development of the imagination, and prophetic ability."

The Nine of Wands is associated in this deck with the constellation Draco, "The Dragon". Located in the far northern sky, Draco winds around Ursa Minor. In his book Stars and Planets (Dorling Kindersley Limited), Ian Ridpath tells us that it represents the dragon that in Greek mythology guarded the golden apples of the Hesperides, the daughters of Atlas, and which was slain by Hercules as one of his labors. Clark explains that the ancient constellation Draco had wings, which were "snipped off in the archaic period and reshaped into the neighboring constellation Ursa Minor."

Clark notes that on a psychological level, the Nine of Wands "reveals the alliance between solar consciousness and the monstrous, or the ego and the shadow." The ego and the shadow are partners, even though there is tension between them. Traditionally the Nine of Wands features an individual in a defensive, reactionary position. In the Celestial Tarot, this card alerts us to the need to summon our inner resources rather than continuing to react from a defensive position.

The Nine of Wands suggests that there is an obstacle to face or task to undertake (or dragon to subdue). Strength and conviction are required to meet the challenge – and the source of strength may well be the shadow instead of the ego.


~ * ~ * ~ * ~
*Book T - The Tarot, Comprising Manuscripts N, O, P, Q, R, and an Unlettered Theoricus Adeptus Minor Instruction. A Description of the Cards of the Tarot with their Attributions; Including a Method of Divination by Their Use. A public domain manuscript.

About the deck: In Brian Clark's introduction to his book Celestial Tarot, he writes: "Celestial Tarot embraces the ancient traditions of astrology, astronomy, and mythology to re-imagine the cards. . . Using the cards invites the individual into the ancient mysteries while simultaneously offering spiritual revelations, personal guidance, and psychological insight. . . Celestial Tarot invites you to participate in the mystery of the subconscious where linear time evaporates and the past, present, and future are fused together to allow greater meaning and understanding."
on Friday, December 10, 2010