A Journey through My Tarot Decks: The Tower

In this series of posts, I plan to discuss all of the Tarot cards in order, using a different deck for each card. Today I'm exploring Trump 16 -- The Tower -- from The Mandala Astrological Tarot by A.T. Mann (published by Thorsons, An Imprint of HarperCollins Publishers). 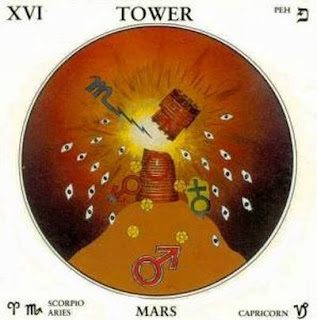 In this deck, The Tower (Trump 16) is associated with the war-like planet Mars (planet of action, passion, anger, and assertiveness), and the astrological signs Scorpio (a Water sign), Aries (a Fire sign), and Capricorn (an Earth sign). In traditional astrology, Mars rules Scorpio (Death, Trump 13) and Aries (The Emperor, Trump 4), and is exalted in Capricorn (The Devil, Trump 14).

The glyphs for Mars and Venus (male and female) come flying out in the explosion (these take the place of the male and female humans often depicted on this card). The dominant color (from the King Scale of Color) is red for Mars. The glyph for Scorpio (thunderbolt) is blue-green. The glyph for Venus is green.

The Hebrew letter Peh appears in the upper right corner of the card, representing riches (according to A.T. Mann). Other sources state that Peh means "the mouth," and symbolizes power of utterance" (The Tarot: A Key to the Wisdom of the Ages by Paul Foster Case) or "the power of communication as an expression of either unity or discord." (The Aquarian Qabalah by Naomi Ozaniec).

Symbols described by Mann:
* Thunderbolt: fate and, in a Buddhist sense, high spiritual direction
* Falling male/female symbols: show that the desire to keep issues of duality within leads to separation and breakdown
* Streaming yods (eyes): the archetypal world of the divine as 22 ways of seeing the next stage of the quest

The message: "Keeping tension inside leads to forced changes in one's condition as the urge to change the world starts with oneself. . . Dependency on the outer world often prevents true spiritual development, until radical changes ensue once these values are questioned." (Mann)

Divinatory Meanings given by Mann: "Total change and loss of security leading to a new beginning. Unexpected disruptions caused by being overprotective. Unwillingness to look at unrest inside. Loss of stability leading to a breakthrough. Reversals of fortune."  Reversed Meanings: "Continuing repression. Self-induced difficulties. Financial or property losses. Rebirth at the cost of extreme difficulty."

Please note that Mann's astrological associations are unique to his deck and often do not correspond to Order of the Golden Dawn associations.
on Tuesday, August 31, 2010