A Journey through My Tarot Decks: Temperance

In this series of posts, I plan to discuss all of the Tarot cards in order, using a different deck for each card. Today I'm exploring Trump 14 -- Temperance -- from The Gill Tarot by Elizabeth Josephine Gill. 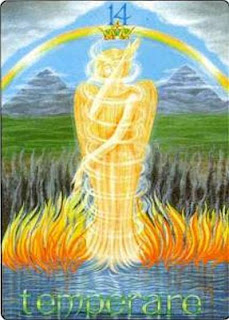 For this absolutely gorgeous card, Josephine Gill has chosen the title Temperare.  Explaining this decision, she writes: This card is usually known as Temperance, but as that is understood today, it does not help to convey the meaning of the picture. I have therefore used the Latin root word Temperare, “to combine properly,” which forms the words tempering (as in steel), temperature (relative heat and cold) and temperament (the combination of the four elements within the self).

Temperare can convey the idea of “moderation,” but also includes gaining strength and equilibrium within the self through the proper combination of opposites.

We reach Trump 14 having just passed through “Death” (Trump 13), where something dies and something new is born or reborn. Temperance follows this theme, suggesting “the reformation of a new consciousness through the tempering effect of the fires and waters of experience.” (Gill)

In Gill’s system (and others) Temperare is the path between Tiphareth (Beauty, superconscious self) and Yesod (Foundation, subconscious) on the Tree of Life.

As outlined by Naomi Ozaniec in her book The Aquarian Qabalah, Tiphreth’s virtue is Devotion to the Great Work and its vices are Bigotry, Zealotry, and Spiritual Pride. Yesod’s virtue is Independence and its vice, Idleness. Tiphareth is at the heart-center of the Tree. Yesod is the final sephiroth on the path of descent toward Malkuth (The Kingdom, physical matter, form). Ozaniec writes: “Where Malkuth can be likened to the visible area of the iceberg, Yesod can be likened to its hidden bulk beneath the surface.”

Among the symbols that appear on Temperare are:
Gill discusses the idea that the “death of the lower appetites and passions is...a way toward the birth of the spiritual self.” This belief has led to extreme and bizarre forms of behavior. When the self is “split” between what it perceives as “spirit good” and “nature evil,” the resulting imbalance can be destructive. Yet it is equally destructive to neglect spiritual aspirations in favor of lower desires.

Temperare calls us to implement “reason-based self-control” (Gill) — not self-torture or repression, but self-control. The subconscious aids in this self-regulation by connecting the higher and lower self.

Gill and others attribute the Hebrew letter Samekh to this card. The word means “tent-peg” or “prop.” In his book The Tarot: A Key to the Wisdom of the Ages, Paul Foster Case comments: “It is what makes a tent secure, and thus corresponds to what would now be suggested to us by the foundation of a house. It is therefore the letter-symbol of that which is the basis or support of our house of life.”

Gill offers a somewhat different slant: “We stay here only a little while. A tent is a temporary dwelling, and likewise the personality is only a temporary dwelling for the spirit. The process of Temperare, the changes we may only make in the environment of the earth, is what holds us here and ‘pegs our tents down.’”
on Tuesday, August 17, 2010