A Journey through My Tarot Decks: The Devil

In this series of posts, I plan to discuss all of the Tarot cards in order, using a different deck for each card. Today I'm exploring Trump 15 -- The Devil -- from The Buckland Romani Tarot by Raymond Buckland. 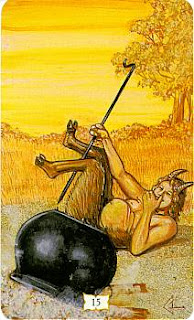 As with his other Trumps, Buckland does not use names on the cards, only numbers (Desh-ta-Panch means 15 in the Romani language). This is because he feels that the names can be misleading. One example he gives is that "The Devil" does not necessarily portend "a meeting with the Christian Antichrist."

The impish fellow on Buckland’s Trump 15 is more akin to Loki, the mischievous Norse god or the “trickster” character in many Native American myths. Buckland tells us that the Gypsy word for “devil” is beng, and that the beng on this card has taken the form of a satyr, with goat horns and hind legs. The association of The Devil with Capricorn, zodiac sign of the goat, is a fairly common one.

The beng has pulled a kavvi-saster (kettle iron) off the fire and tipped it over. He finds this prank hilarious, yet it could have serious consequences if the contents of the kettle represent a family’s main meal or the last one they will have for a long time. Buckland asks: "Is leaving a cooking pot (or a family matter) unattended an invitation to disaster?" On the other hand, the havoc created by this beng may simply be an inconvenience, making extra work for someone.